My friends and I spend a lot of our waking hours looking for very old bicycles that, despite the intervening years, are still in original condition and retain a badge, transfer, cartouche or maker’s plate so that identification is possible.
In the first year of cycle manufacture (1869), many velocipedes of varying quality were built …but not all had the maker’s name attached. Generally it was the top quality machines that had a maker’s plate or cartouche (engraving); cheaper machines were made to look like the best velocipedes, but were usually without a name plate. Most surviving velocipedes are unidentified. You can imagine, then, the joy at seeing an 1869 velocipede such as the one featured here, owned by my friend Julian. He has asked me to sell this treasure for him, and this is his description:
This is a rare and beautifully built machine by a quality British maker. It is large and imposing with a 40 inch front wheel.
The handle bar grips are made from rose wood, supported by forged bronze handle bars, with bronze clamps and screws. The clamps have oiler holes.
A unique feature is the brake ratchet mechanism which enables the rider to apply the brake and leave it in tension without having to continually hold it on; it can then be simply released by flipping a small leaver.
The long spring that supports the saddle is fixed in place at the front with fixings of bronze and shaped like acorns. The main spring has a second upper smaller spring to add to its strength, and this has the maker brass plate attached by rivets (above).
The rear spring mounting has two unusual and as yet unknown U shaped brackets attached.
The steel cranks have two holes to mount the pedals into different positions. The pedals are triangular in shape and again made from bronze.
The front wheel runs on bronze bushes, these have a small sump in the lower half with a wick to supply a supply of oil to the rotating axle. The rear wheel has a oiler fixed directly into the hub; its screw-on lid is missing.
The front wheel has had sympathetic restoration that involved fitting five new spokes. These have been painted black, but not had the yellow pin stripe applied to ensure there is no confusion as to what is original. Both wheels are beautifully made, as one would expect from such a quality machine. The fellow on the rear wheel is one continuous piece and the front is made from two pieces.
The frame retains a large amount of the original black enamel and yellow pin stripes. The steering head is well-detailed and still has the original leather washer that sits between the fork and frame.
The bike has been cleaned but not restored. it probably has not been ridden for over 100 years.
Apart from missing the seat cover and the leather brake band it is totally complete.
This is a rare British machine of very high quality, it has been in a private collection for many years.

Manufacturers of ‘Excelsior’ boneshakers, at 1 Margaret Street, Limehouse, London. Machines were priced from £9-£11 according to front wheel size (28 in. to 48 in).

An interesting feature was the ratchet and pawl on the handlebar to keep the brake applied.

[This info with thanks to Ray Miller’s Encyclopaedia]

The handle bar grips are made from rose wood, supported by forged bronze handle bars, with bronze clamps and screws. The clamps have oiler holes (above and below). 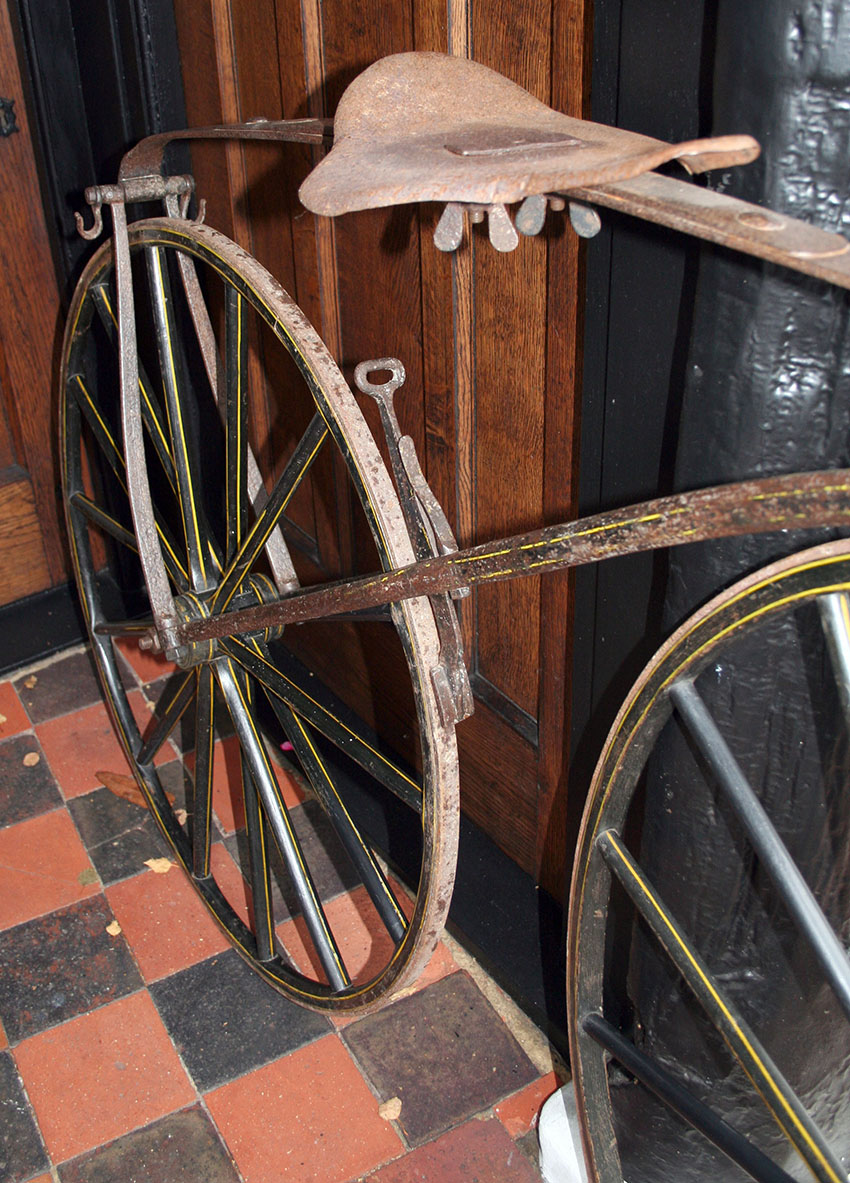 1869 was a momentous year for cycling. The new velocipede immediately caught the public imagination, and engineering works everywhere suddenly stopped making whatever they made before and re-tooled to become velocipede manufacturers. With so many companies jumping onto the velocipede bandwagon to cater to the new craze, manufacturing quality invariably suffered. Wholesale manufacturers Newton Wilson & Co, of 144 High Holborn therefore described the poorly made machines as ‘The Veriest Rubbish Conceivable.’

The popular press were quick to lampoon the new machines.

The long spring that supports the saddle is fixed in place at the front with fixings of bronze and shaped like acorns (above and below).

The rear wheel has a oiler fixed directly into the hub; its screw-on lid is missing (below).