That exquisite something called style, which, like the grace of perfect breeding, everywhere pervasive and nowhere emphatic, makes itself felt by the skill with which it effaces itself, and masters us at last with a sense of indefinable completeness.

The E. C. Stearns Bicycle Agency was established in 1893 by industrialist Edward C Stearns who began business as a hardware manufacturer and branched out into bicycle production. Stearns manufactured the Yellow Fellow from 1895 onwards. This model was manufactured by the thousands at the Syracuse NY factory (below) and “made the name of the city familiar in almost every corner of the world.” The slogan read “The Yellow Fellow from Syracuse”.

On August 14, 1896, Eugene A. Neidert rode a Yellow Fellow up the steps of the Capitol Building in Wasington DC. His exploit found its way into the news column of almost every US newspaper and the Stearns company “capitalized the stunt” in their trade paper, Yellow Fellow, which was issued weekly.

At one time, the company had four factories in Syracuse, with 3,500 employees, another plant in Toronto, Canada, and one in Germany to supply the European market. They also had a strong export market in Australia and New Zealand.

The company was one of the top three advertisers in the cycle business. Stearns always incorporated the Yellow Fellow model in all their advertising. When asked why, the advertising manager, G. H. E. Hawkins indicated that the name was “synonymous with ‘Stearns’ so that whenever one sees a yellow bicycle his mind naturally reverts to Stearns and Yellow Fellow. Our efforts in this direction have been flatteringly successful, and there’s hardly a man, woman and child on the continent knowing the difference between a bicycle and a tricycle, but instinctively recognizing any yellow bicycle as a ‘Stearns’.”

“Dear Sir, Will you favor me by ordering another ’96 Stearns bicycle to be shipped to my London residence, Walsingham House, Piccadilly. The Stearns is the lightest and most durable wheel that I have ridden and an ideal bicycle for women. Yours very truly, Olga Nethersole.”

This example is an older restoration: when it was repainted it retained the original transfer (decal). The nickel is in good condition. The pedals have been replaced. The wooden rear mudguard has provision for a skirt guard; I have one if required. The Special is very presentable, has metal wheels with a coaster brake, and is ready to ride. 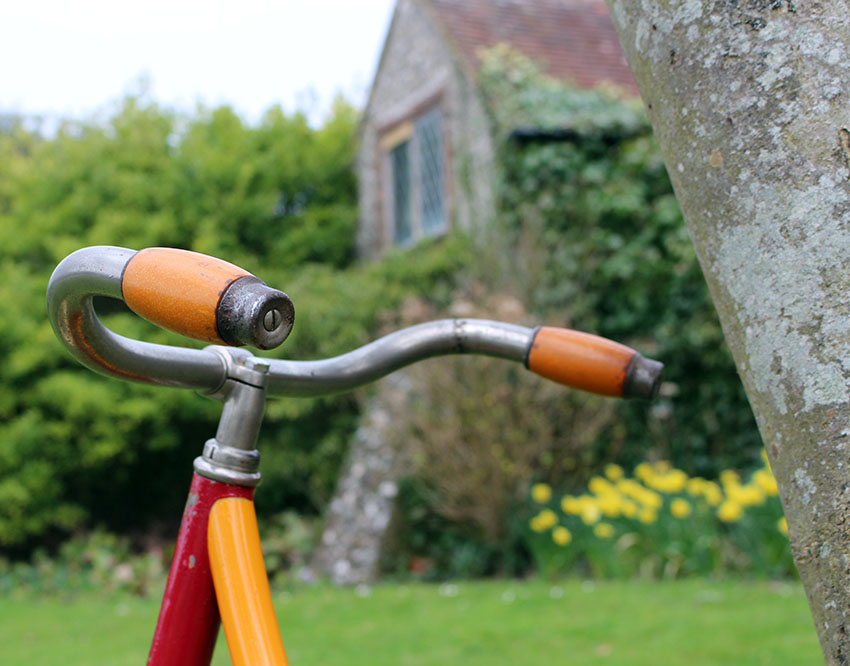