For the information of new readers, we may here repeat the assurance that there is no second quality of BSA fittings. We have never made but one quality, and, by the stringent method insisted upon in our view rooms, we have made it impossible that there shall be any variation in quality. Beginning with the raw material, and continued through every stage of manufacture, repeated examination by a highly trained staff of experts ensures the maintenance of BSA Standard.

In order that true interchangeability may be attained, every part is submitted to a detailed system of examination by experienced inspectors, of exactly the same character as is insisted upon by His Majesty’s War Department, and carried out in the BSA Gun Factory for the last forty years.

BSA Fittings have been specified for the machines to be built to the order of the following Government Offices:

Bicycles had been trialled by the military since their invention. But the Cavalry, having seen how the bicycle was supplanting the horse in civilian life, saw the machine as a threat. The Boer War was the first opportunity for bicycles to prove their value in the field. The Boers put bicycles to good use, and the British army tried out many new innovations in the field. Engineering units laid hundreds of miles of telegraph cable, many using bicycles for this purpose. This was the first war where the folks back home were able to receive information about the course of events so soon after they occurred.

Alldays & Onions and other companies already supplied military cycles to the British government, but the various cyclist volunteer battalions invariably used their own machines as well as official military machines. In the event, any suitable civilian bicycle was pressed into service.

BSA had already been supplying arms for the government for many decades; the company had come into existence for that exact purpose. So as soon as the specification for a military bicycle was published in 1901, BSA also started manufacturing bicycles to the requisite pattern. The first government pattern was officially described as ‘Bicycle (Mark I) Medium, High, Low.’ It was amended to a Mark 2 version with minor changes the following year.

Martini-Henry Mk II Rifle manufactured in 1876 by BSA, rechambered to .303 for the Boer War

This is not a military bicycle made to government order, although the rifle mounts fitted to it are the same as the government specification for the ‘Bicycle (Mark I) Medium, High, Low’ of 1901 and the BSA 1st Pattern chain wheel is also identical.

This is a BSA Fittings bicycle, similar to many hundreds of machines that were used during the Boer War. You can see a similar one illustrated below – with the same BSA chain wheel – being used by a member of the Electrical Engineer Volunteers.

Each ‘BSA Fittings’ bicycle is unique, though, due to the consistent standard of its components, its parts would be interchangeable with other ‘BSA Fittings’ machines.

As there are no records of machines built by the many small cycle companies who used BSA fittings, it is impossible to know the exact age of such a bicycle. However, we are able to date such a machine from its chainwheel.

This bicycle has the Inch Pitch second pattern chainwheel, current for BSA machines between 1899 and 1903.

Chainrings up to 1899 had no more than 20 teeth and straight arms.

From 1908 the letters ‘BSA‘ were included. (The BSA lettered chainwheel continued until the 1960s) 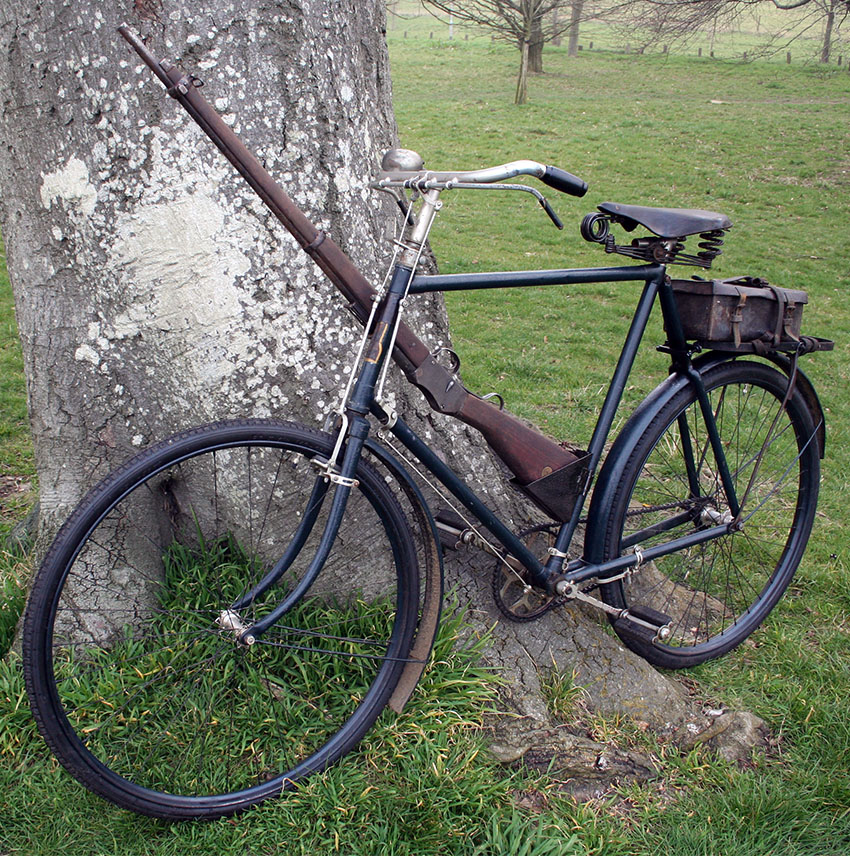 The picture below illustrates the variety of civilian bicycles used by the Cape Colony Bicycle Corps. In the foreground is a mid-1890s fixed wheel medium-weight roadster, while behind it is a road racer with sporting handlebars.