SPECIALLY APPOINTED TO H.M THE KING

Rudge-Whitworth’s royal affiliations featured prominently in their catalogues and in publicity in newspapers and magazines. Each Rudge-Whitworth bicycle also proudly declared: ‘Specially appointed to H.M THE KING.’

with Celluloid Handlebars and Pedal Cranks

The Aero Special Lady’s Featherweight was a revolutionary design when it was introduced in 1903. Lightweight frames were not new: advances in tube construction meant that frames became lighter each year through the 1890s, reaching a peak just after the turn of the century. Light weight was particularly important, of course, for racing machines. But Rudge-Whitworth applied the technology to its lady’s bicycles, perfecting the technique with the introduction of the Aero-Special in 1903.

The Aero Special model continued from 1903 to 1922 with only minor changes: the celluloid chaincase was changed to a full metal chaincase after WW1; roller lever brakes became an option in 1906; and in 1912 the front mudguard gained a forward extension. Otherwise, the 1921 Lady’s Aero Special was the same as prewar, except for a price increase for the No 2 model from 9 guineas (1915) to £16 10/-. The Aero model name was still in use when the company was sold in 1934.

This machine was obviously well cared-for throughout its life. How do I know?

Despite a film of surface rust, it retains its original paint plus original transfers (decals) on the down tube and chaincase. The Rudge Whitworth head badge still has red paint on its Hand. The ‘four bar’ (split) Rudge-Whitworth pedals are particularly attractive, and though worn they are in good condition. It retains the original brass oilers to the front hub and above the bottom bracket. The V section patent Rudge-Whitworth mudguards are intact (often damaged if someone in the past has incorrectly lifted a bicycle by its mudguards). Probably its nicest and most unique feature is the company’s patent celluloid covering on the handlebar and pedal cranks. Usually these become cracked and broken over time and with use, but these are in excellent condition, proof indeed that it has been cherished, and probably not ridden extensively.

This 100-year-old Rudge-Whitworth is totally original and in good order all round. It has been in dry storage for many decades, so could do with a good cleaning and its new skirtguard lace can be fitted. I’ve serviced it and fitted new tyres and tubes, so it is now ready to ride and see faithful service for the next century…

A feature of early Rudge-Whitworth bicycles that I particularly like is the brass oilers to be found on the front hub and above the bottom bracket, which illustrate the company’s famous hand logo. 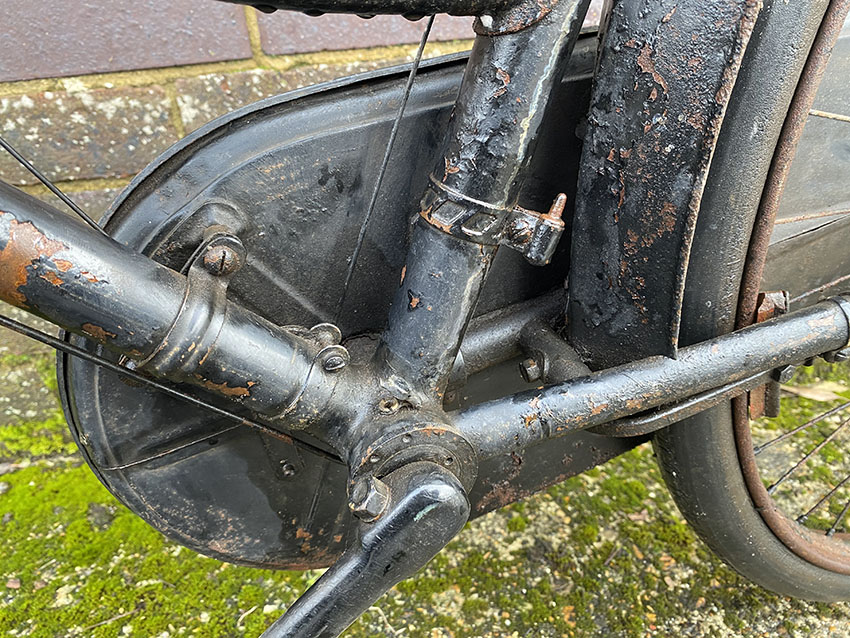 Ladies’ bicycles were fitted with a cord skirtguard on both sides of the rear mudguard. The string passes through each of the holes in the mudguard in turn, each time returning to the loop at the axle.

Being delicate, the old cords usually break, and in any case must be removed to fit a new tyre. But I do stock a replacement cord ready to fit (above).

I own an original shop display for ‘cycle laces’, below, but I would not want to use its laces as it’s such an interesting original item in its own right.

PRINCE ALBERT, Duke of York— ‘Bertie’ to the family — was the second son of King George V. He attended the Royal Naval College, Osborne, as a naval cadet in 1909. The following year, with the death of Edward VII and his father becoming George V, he became second in line to the throne. In 1914 he began service in WW1, and was mentioned in dispatches for his action as a turret officer aboard Collingwood in the Battle of Jutland (May-June 1916), the largest naval engagement of the war). He transferred to the Royal Air Force upon its establishment in 1918 and was the first member of the royal family to be certified as a fully qualified pilot. He married Elizabeth in 1923, and became King George VI unexpectedly in 1936 as a result of his older brother Edward’s abdication. He died in 1952, and was succeeded by the current Queen Elizabeth in 1953.

PRINCE HENRY, born in 1900, was the third son of King George V, and his title was H.R.H Prince Henry of York. Unlike his brothers who joined the Royal Navy, Prince Henry joined the Army, attending the Royal Military College at Sandhurst in 1919. He later served with The King’s Royal Rifle Corps and the 10th Royal Hussars before retiring from the active list in 1937. He became H.R.H the Duke of Gloucester in 1928. With the outbreak of WW2, he joined the British Expeditionary Force as Chief Liaison Officer, and was slightly wounded when his staff car was attacked from the air. He became Governor-General of Australia in 1944, serving until 1947.