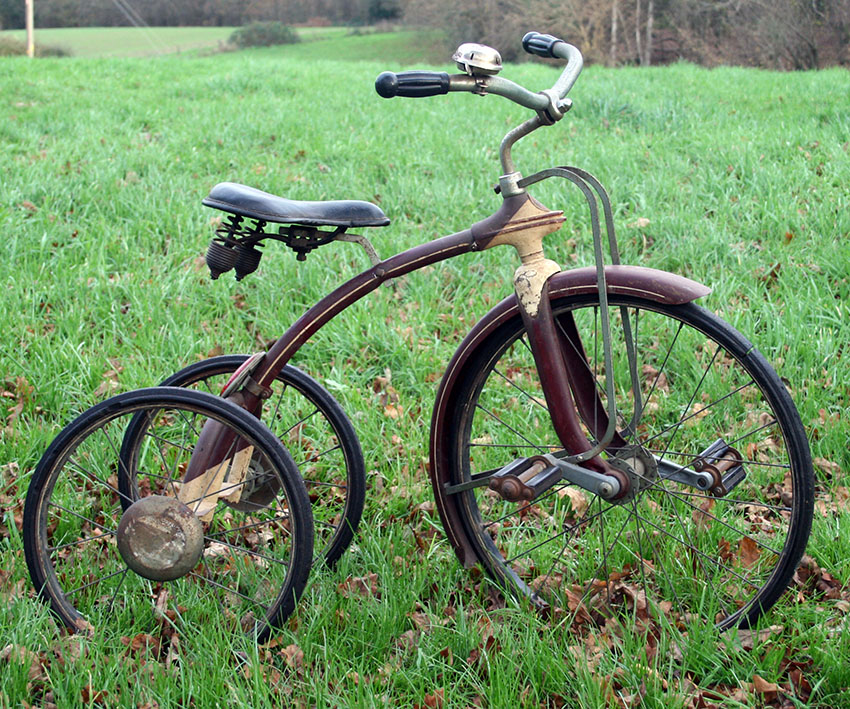 A. Mecky Co was established by Richard G. Ledig in 1883 in Philadelphia as a manufacturer of bicycles. Baby Buggies were made after 1908, and pedal cars from 1915 onwards. The Velo King name was registered in 1920. After introducing Velo King tricycles to the market, these appear to have become the company’s most popular product. The company was sold to E.C Brown, of Rochester NY, in March, 1931. Richard G. Ledig remained vice-president until his retirement. After 1931, Velo King tricycles showed the name E.C Brown on their headbadges.

I’ve estimated the age of this one as 1938. While reassembling it after its transatlantic journey I was struck how well made it is, with separate pedal cranks and a robust truss rod. This example is in excellent preserved condition: it was obviously cared-for during its lifetime.

Though they’d been producing pedal cars at least since 1915, one of Mecky’s earliest successful lines was this toaster. At the time it was known as a ‘Twin Bowl Triple Purpose’ toaster, though in more recent years referred to by collectors as a ‘Ledig Mecky’ after the name of the president of the company (and inventor), Richard G Ledig.

Richard G Ledig patented many products over the years, mainly to do with heating and lighting. The baby buggy (push chair) seen below is from 1908. In those days they were known as ‘go-carts.’ 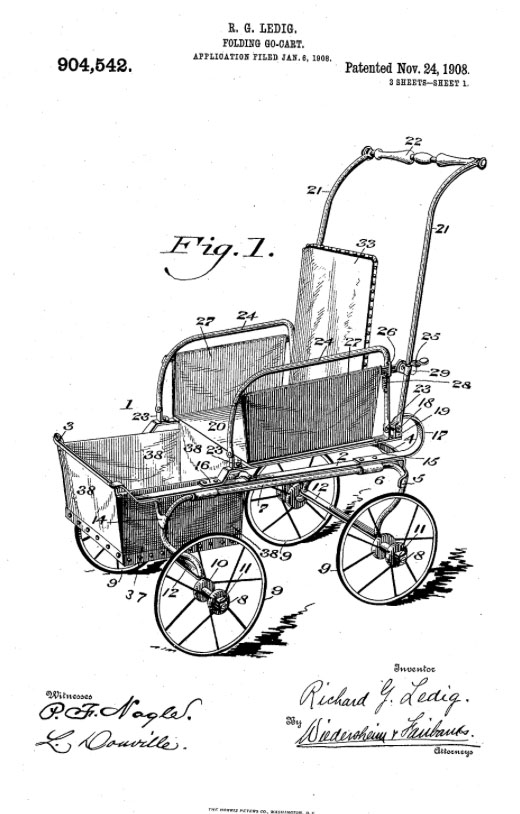 The patent below, from 1918, is for a tricycle seat that mounts centrally, similar to those used by Colson on their  ’tiller & treadle’ Fairy tricycles.

The tricycle patent, below, is dated 1922 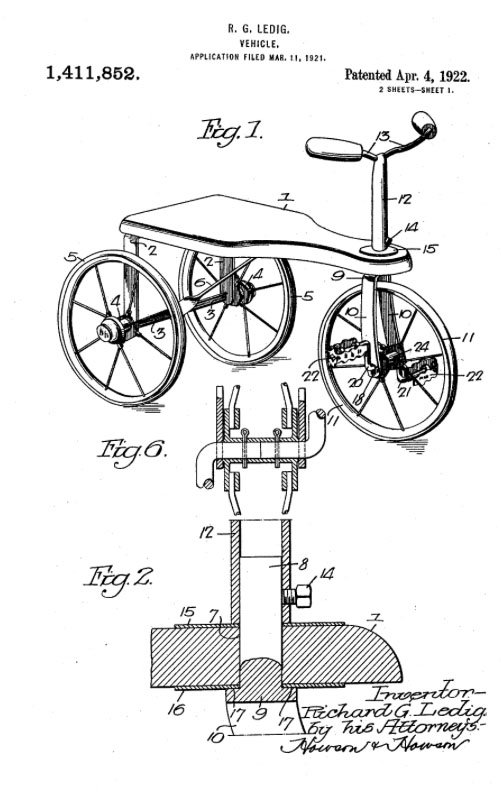 The sidewalk bicycle he patented in 1925 has an adjustable frame: ‘My invention relates to a new and useful construction in bicycles of the character stated, having a novel frame construction which possesses certain adjustable features which render the same more efficient and serviceable and certain novel features of construction whereby a bicycle may be produced at a cost much lower than that of other bicycles made heretofore.’ He described it at the time as a ‘combined bicycle and scooter.’

His patent of 1933 (filed in 1929) was for a bicycle frame that could be spot-welded during assembly rather than brazed as was the practise before: ‘one of the braces is slotted to provide flanges which can be deflected over juxtaposed portions of the frame member to which it is to be secured and these flanges are then spot welded to firmly secure them in position.’ 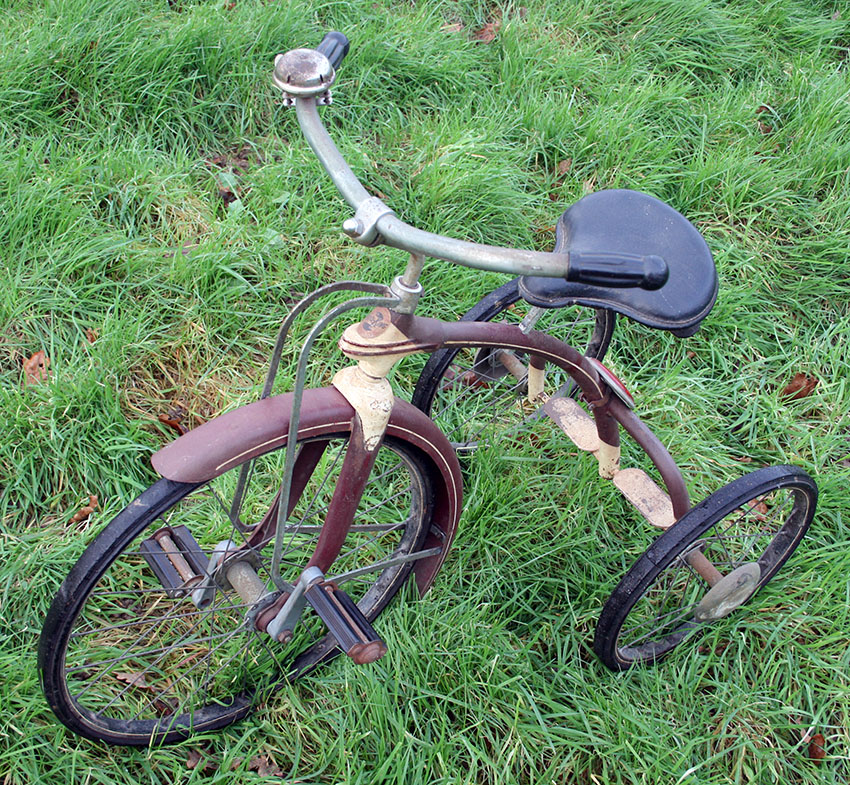 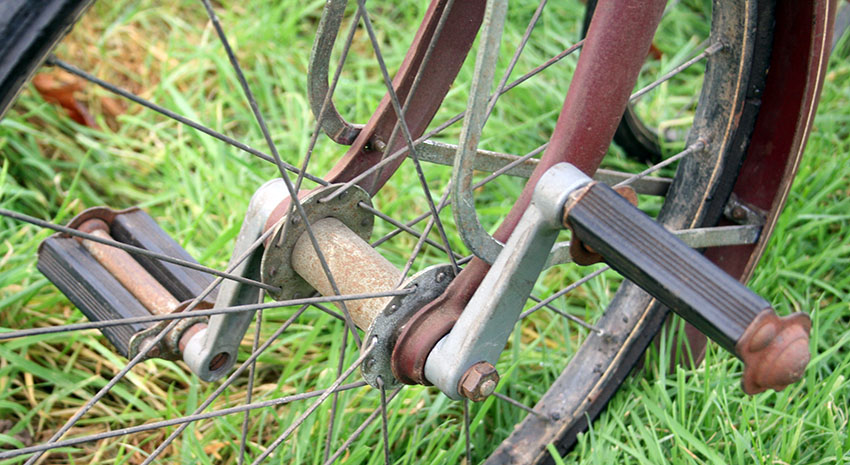 The style of the Velo King tricycles illustrated in this E.C Brown catalogue suggests manufacture between 1935 and 1937. So many new styles of velocipede tricycle were made at this time that it’s hard to accurately calculate age. I’ll update this page as I find new information. 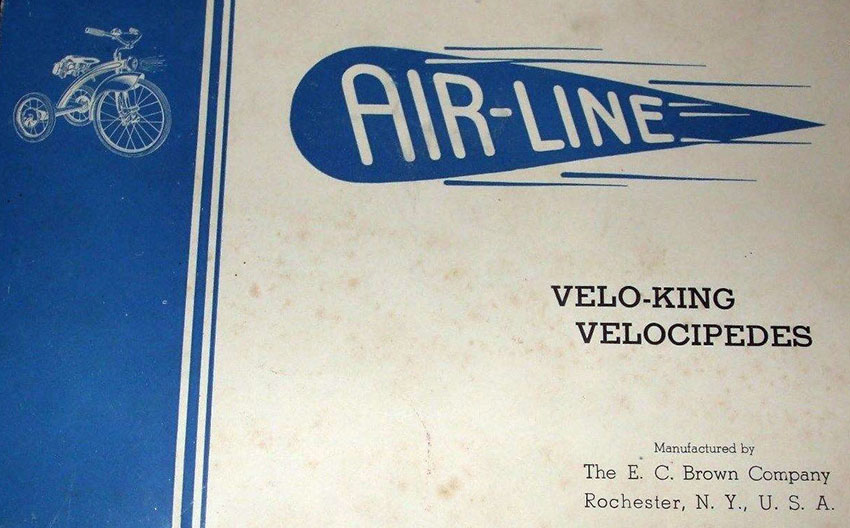 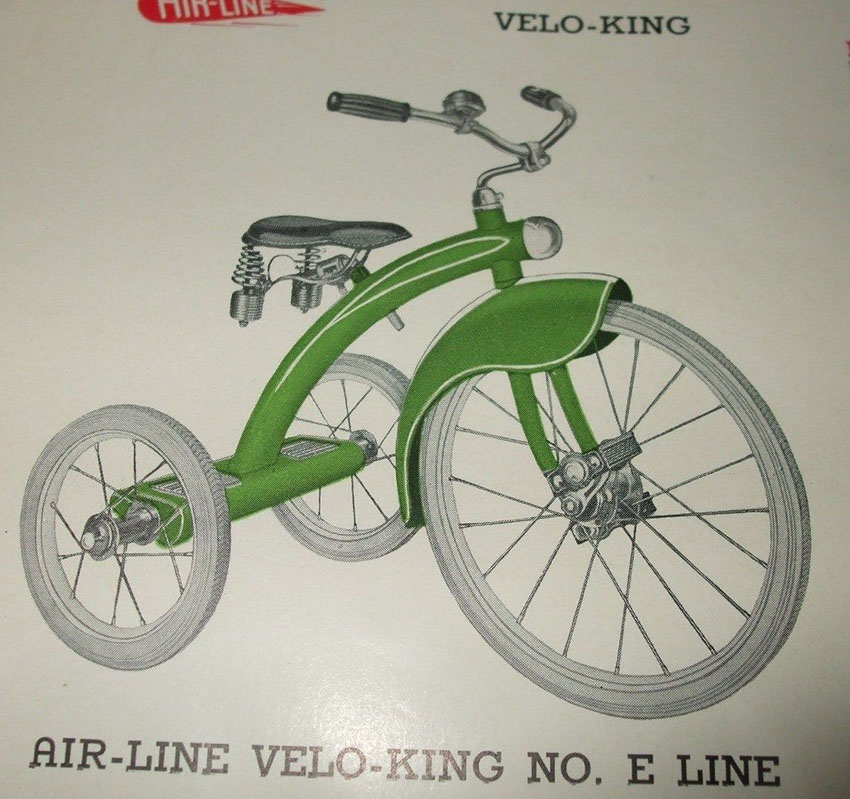 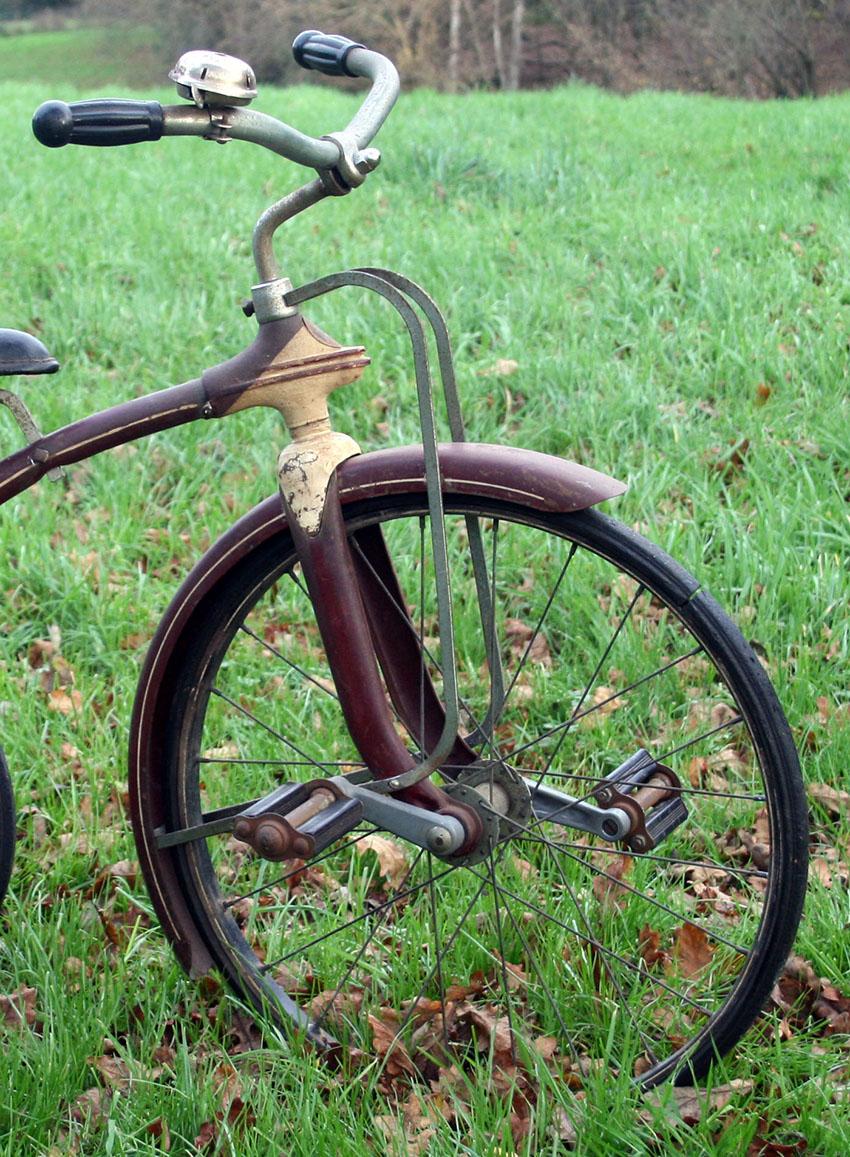 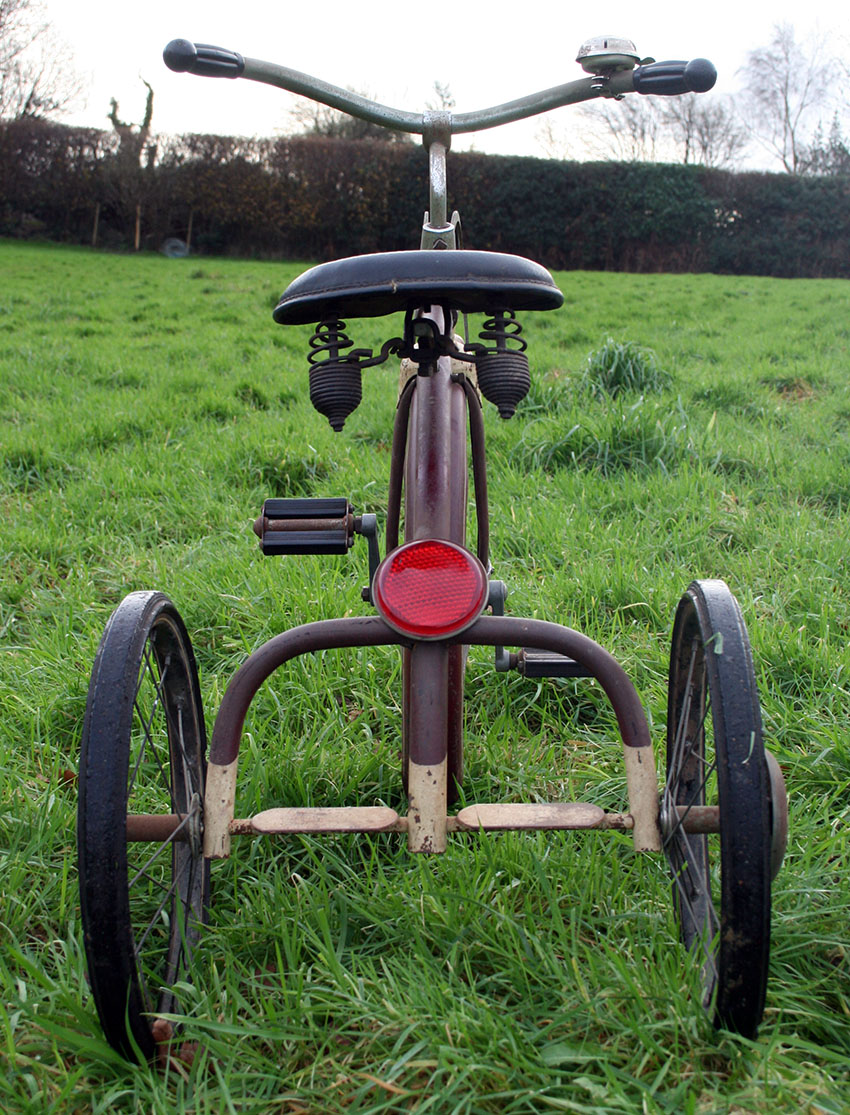 A.Mecky Co information – with thanks to Allen Griffiths of Melbourne, Australia

VELO KING TRICYCLE PHOTOS – with thanks to Dave, juvenile tricycle specialist and ‘Ridingtoy’ on thecabe forum