This unique Shelby bicycle features a metal Donald Duck head at the front of its tank, with eyes that light up in motion. 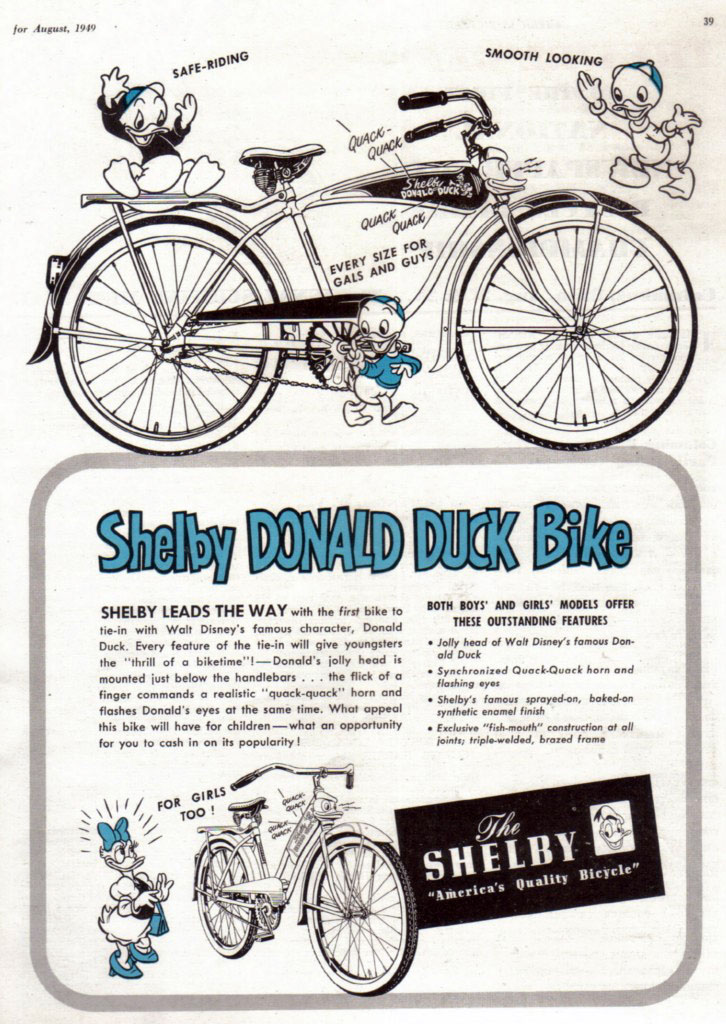 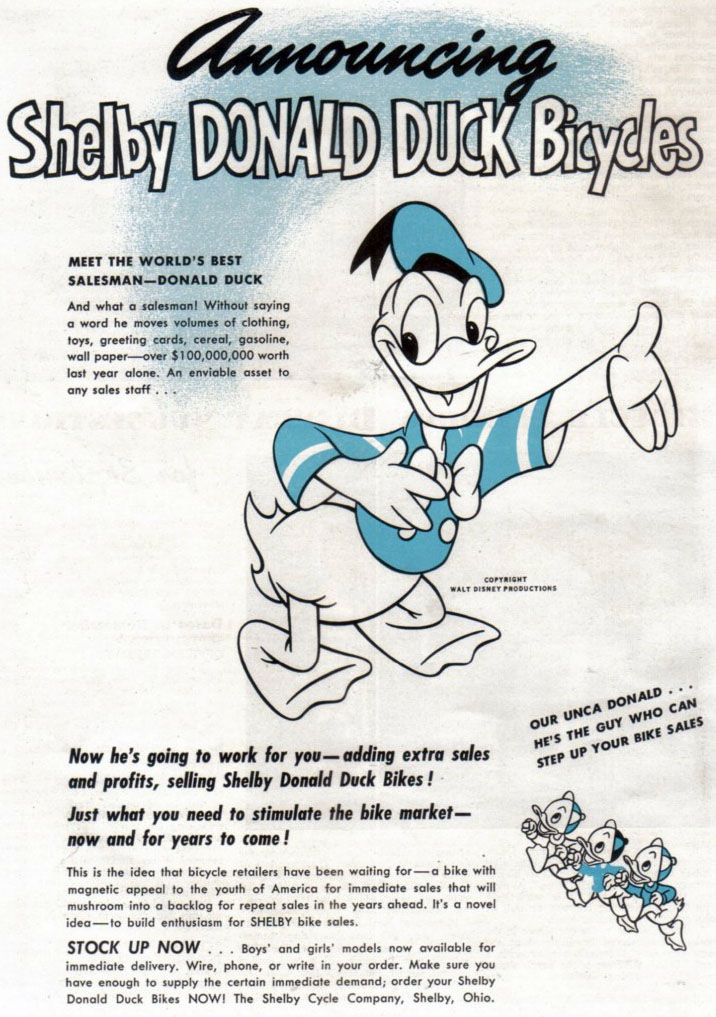 It was hard work finding an original, unrestored Shelby Donald Duck bicycle that had not been ruined by America’s hobbyist obsession with repainting every vehicle to make it look like new. There are very few original ones left. On December 8, 1941 – the day after Pearl Harbor – the Disney Studio was taken over by the military as part of the war effort. Making the most of the talent that hadn’t shipped out yet, Walt Disney spent the next four years creating and producing training, propaganda, and educational films for the Armed Forces.

Many of the wartime entertainment shorts are largely propaganda. Donald’s nightmare of working on a Nazi assembly line in “Der Fuehrer’s Face” is still hilarious slapstick. The grimmer “Education for Death” and “Chicken Little” have aged less gracefully. Disney’s oddest wartime project was Victory Through Air Power (1943), a live action/animation feature based on Major Alex de Seversky’s controversial book that called for the adoption of long-range bombers. By the time it was finished, air power was a reality. The last time the United States issued war bonds was during World War II, when full employment collided with rationing, and war bonds were seen as a way to remove money from circulation as well as reduce inflation. Issued by the U.S. Government, they were first called Defense Bonds. The name was changed to War Bonds after the Japanese attack on Pearl Harbor, December 7, 1941. Known as debt securities for the purpose of financing military operations during war time, the bonds yielded a mere 2.9 percent return after a 10-year maturity.

An emotional appeal went out to citizens by means of advertising. Even though the bonds offered a rate of return below the market value, it represented a moral and financial stake in the war effort. The advertisements started with radio and newspapers, then later added magazines to reach the masses. The bond campaign was unique in that both the government, as well as private companies, created the advertisements.

Those who contributed advertising space felt they were doing even more for the war effort; then there were organizations that made up their own war bond advertisements to reflect their patriotism. The government recruited New York’s best advertising agencies, famous entertainers, and even used familiar comic strip characters to further their appeal to America. Bond rallies were held throughout the country with famous celebrities, usually Hollywood film stars, to enhance the advertising’s effectiveness. Free movie days were held in theaters nationwide with a bond purchase as the admission. Such popular Hollywood stars as Greer Garson, Bette Davis and Rita Hayworth completed seven tours in more than 300 cities and towns to promote war bonds. The “Stars Over America” bond blitz, in which 337 stars took part, surpassed its quota and netted $838,540,000 worth of bonds.

At the end of World War II, January 3, 1946, the last proceeds from the Victory War Bond campaign were deposited into the U.S. Treasury. More than 85 million Americans — half the population — purchased bonds totaling $185.7 billion. Those incredible results, due to the mass selling efforts of helping to finance the war, have never since been matched. Although Rollfast’s Hopalong Cassidy bicycle range was the biggest-selling character bicycle, Shelby had actually been the first to make one. Their 1928 Lindy Bicycle (above) celebrated Charles Lindbergh’s record-breaking solo transatlantic flight on May 20–21, 1927. It featured a miniature ‘Spirit of St. Louis’ airplane on the front fender whose propeller rotated as the bicycle moved forward.

Disney was already an American institution by WW2. A Disney tie up with a cycle manufacturer was no doubt a logical marketing idea, though the bicycle was not particularly successful. These days, it’s debatable how ‘cool’ you might look riding a garish yellow and blue bicycle with Donald Duck’s eyes lighting up as you ride.

Even more debatable is how many people would get out of your way when you press a horn that quacks. (You can see the quacking horn switch on the top of the tank, below).

But for young riders in postwar America a Donald Duck bicycle would have been a dream bike. My young daughter loves it, though I have a feeling that by the time she’s old enough to ride it she’ll have long grown out of Donald Duck. Shelby Cycle Co created some fabulous bicycles. They supplied large chain stores such as Montgomery Ward, Spiegel and Gambles. I can imagine a Donald Duck bike selling better in a department store than in a bicycle shop. BOYS AND GIRLS! You’ll want to be the first in your neighbourhood to join Bobby Shelby’s Bike Safety Club.

It’ll be great fun to round up all your pals for membership, and you’ll be making a real contribution to your town. APRIL 2010: Shelby Donald Duck makes her debut at the Amberley Veteran Cycle Day, W. Sussex, in the company of the 1952 Rollfast Hopalong Cassidy. 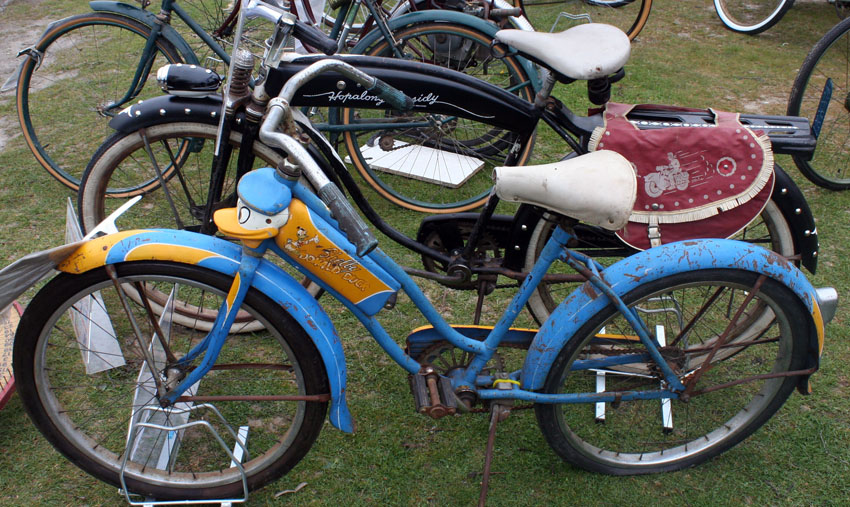 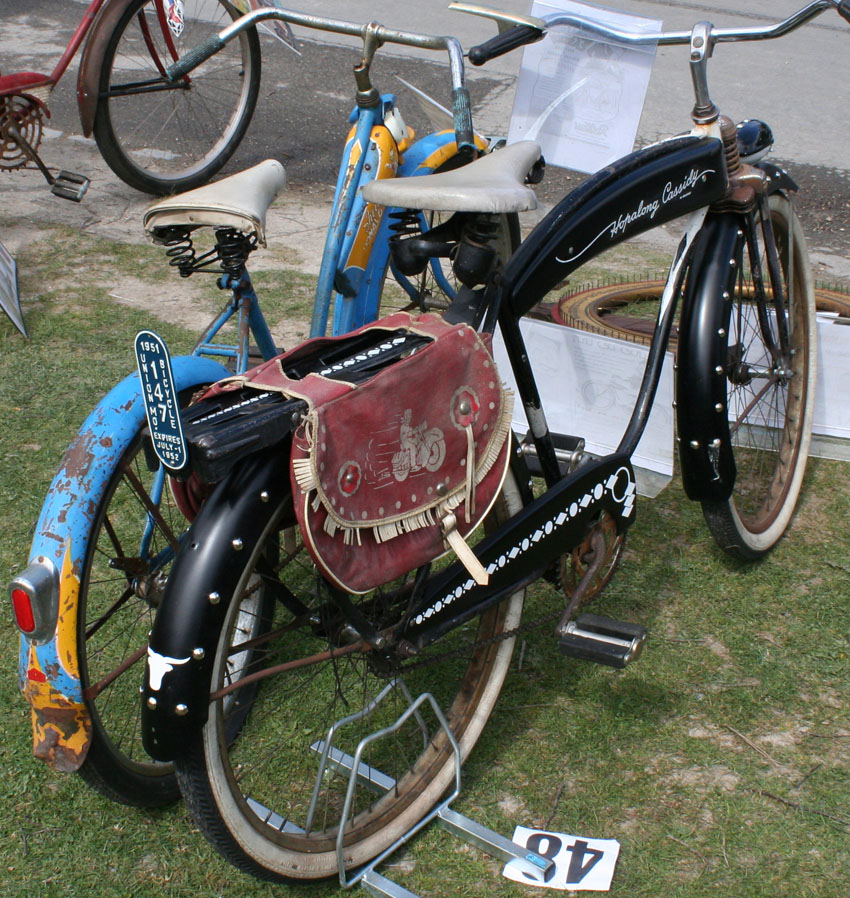