‘It just shows what can be done by taking a little trouble,’ said Eeyore. ‘ Do you see Pooh? Do you see Piglet? Brains first and then hard work. Look at it! That’s the way to build…’ said Eeyore proudly

At the beginning of the twentieth century the weight of differing concerns in the roads began to shift. The state of non-urban roads was an object of widespread criticism not only from the very few ‘automobilists’ but also from the great numbers of cyclists. While the latter did not welcome the presence of the former, both lobbies agreed that the surfaces of the prevailing macadamised roads, dusty and rutted when dry, muddy and rutted when wet, needed to be comprehensively levelled and hardened. Parnell Hooley, as county surveyor for Nottinghamshire, already respected for a paper on road maintenance given to the Association of Municipal Sanitary Engineers in 1897, hit upon the effective formula for hardening the surfaces of macadamised roads with tar. He patented it in 1901.

Lloyd George, who in 1909 introduced provision in his budget for a Road Improvement Fund to be dispensed by a Roads Board, gathered the support both of the army of cyclists and the company of (newly taxed) automobilists by enabling Exchequer proceeds from duty on petrol to be distributed to local authorities to top roads with tar (or water to reduce dust); to widen and straighten roads; to divert them round communities; and/or to build new roads.*

As well as the condition of road surfaces, cyclists also had to contend with fellow road-users. An important consequence of the popularity of cycling was that while, in the late Victorian years, impediments faced by cyclists comprised horse-carts, pedestrians, dogs and policemen, by 1912 the roads had become so crowded that cyclists found it difficult to travel on main roads. Hence the illustration in the 1912 Cycling magazine on the next page, speculating about the fate of the London to Brighton Road in 1922. 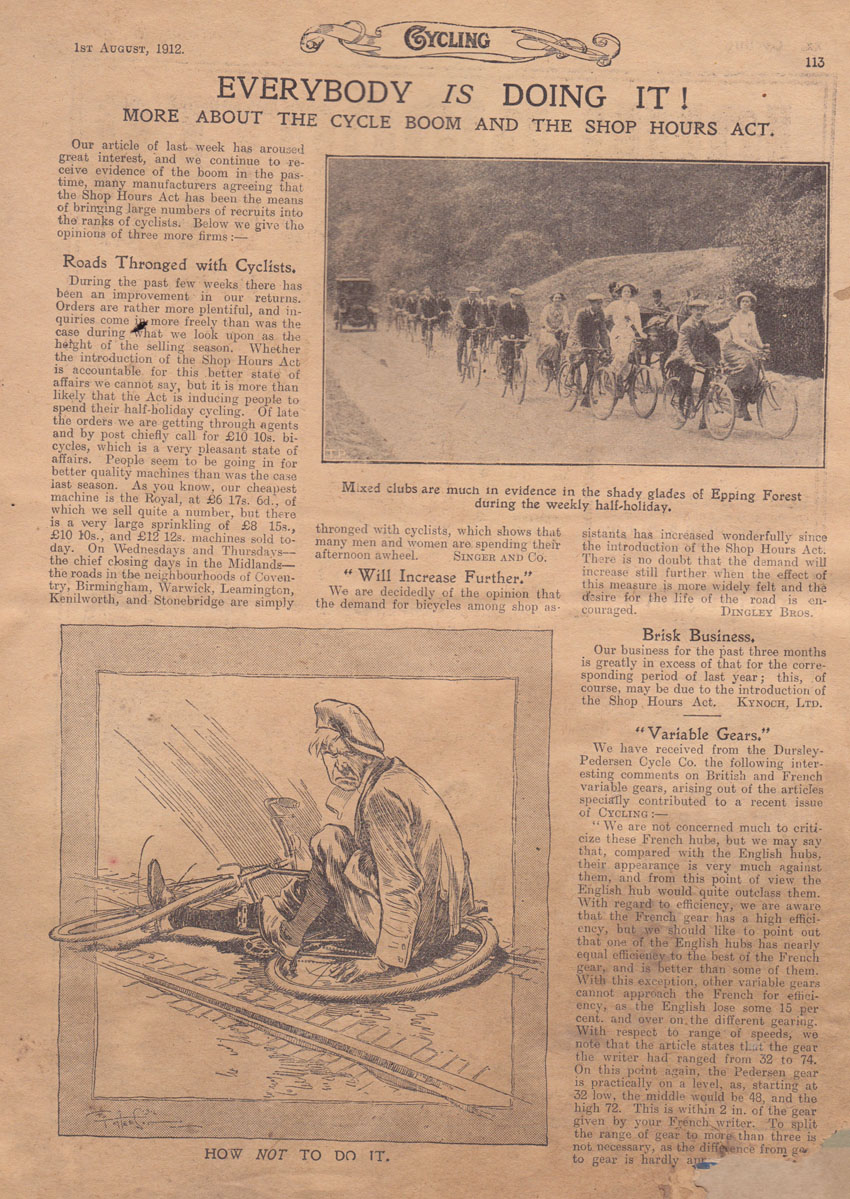 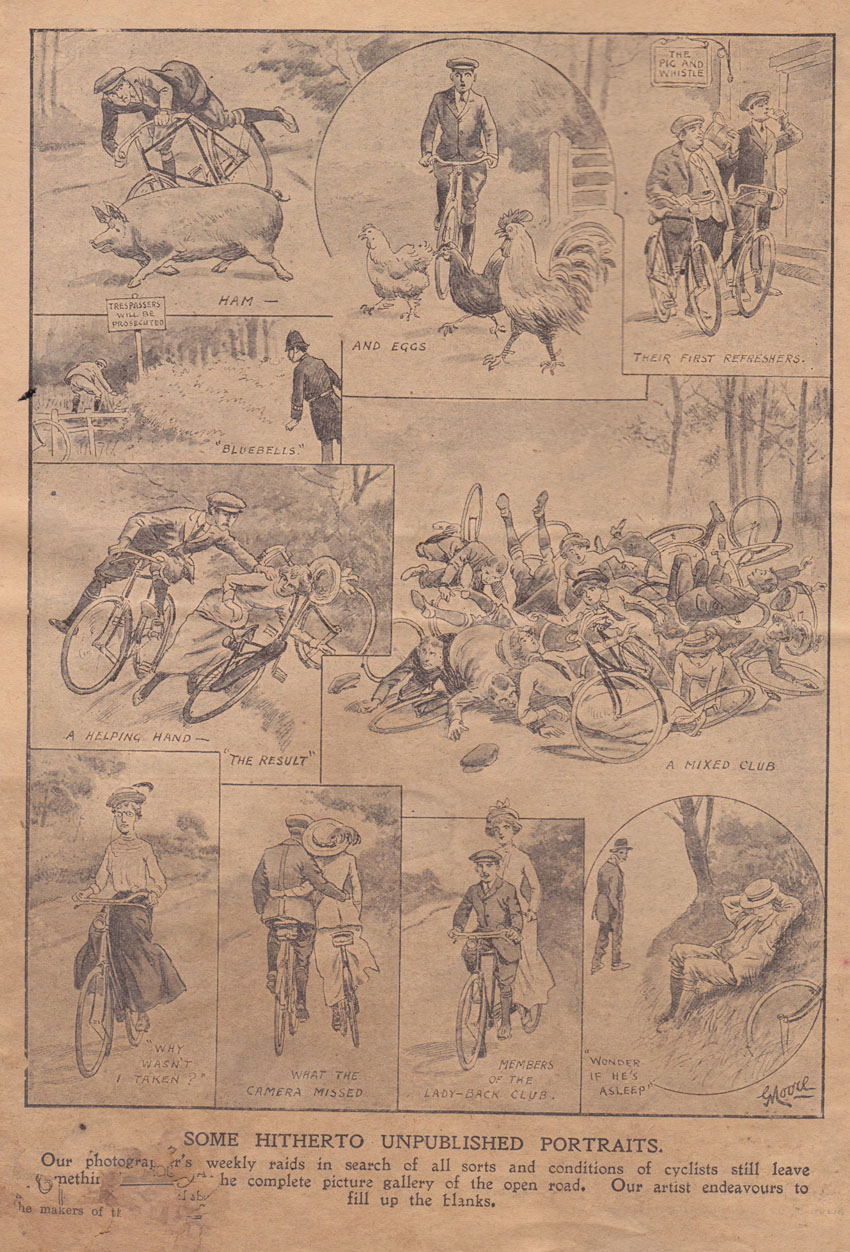 As an inhabitant of the county of Warwickshire, I have always had an idea that the comparatively level roads of the districts surrounding Coventry and Birmingham had something to do with the early popularity of the bicycle.

It is inconceivable that had the heavy, hard running machines of the early days of the industry been exploited in Devon, for example, they would have attracted the attention of the mechanical minds that evolved the perfect bicycle we ride to-day.

The modem bicycle, had it been possible to put it on the road in its present form at one jump, would have been popular anywhere and at any time, but with the bone-shaker it was different.

Many years ago the surfaces of the Midland roads around Coventry and south of Birmingham were much better than they are now ;     the hills, except in the Edge Hill district, are not abnormally steep, and close to Coventry is the famous London road with a level stretch for six miles or more. It was on such highways that the high ordinaries were perfected and the safety bicycle tested and exploited. They were both tested and tried out in other places, but Coventry was the home of the bicycle, and without fairly level and good roads I am sure the early attempts would not have developed the enthusiasm of their makers to the same extent.

The use of the bicycle expanded from Coventry and the Midlands like a ripple on a pond spreads from the spot where a stone is thrown into the water. The Warwickshire roads had therefore a good deal to do with the popularity of the pastime in early days.

The classic roads of England and Wales are the Great North Road, the Bath Road, the Holyhead Road, and the Brighton Road. Mr. C. G. Harper has given us interesting descriptions of these great highways in his books, named after the roads themselves, also narrative and data referring to each. I only propose to refer to them from the cycling view point, and would advise those who wish to acquaint themselves with their history in detail to read the Harper series.

Two other interesting roads of value to cyclists are Watling Street and the Fosse.

On the Great North Road are started the famous 12 hr. and 24 hr. road races of the North Road C.C, but as the club only utiUze the classic highway as far north as Norman Cross, near Peterborough, the route for their race extends mostly eastward into the adjacent fen country. The London-Edinburgh record breakers ride on this road from the G.P.O., London, to a point near York, where the highway ceases to be known as the ” Great North Road ” but it is, of course, the route by which the old coaches travelled between Edinburgh and the metropolis. The Bath Road C.C. claim the western highway as their special hunting ground, and there is a recognized Bath and Back Record, the time of which is occasionally reduced by some expert rider who tackles the journey under favourable conditions. There is no recognized road record for the Holyhead Road, but as it is the main artery from London and the Midlands into North Wales it becomes almost a necessity for cyclists to make its acquaintance when travelling to the watering places of the North and West. Leaving London it occupies the site of Watling Street (is Watling Street in fact) until at Weedon it branches to the left and passing through Coventry, Birmingham, and Shrewsbury, enters Wales near Chirk. It then traverses some of the most famous beauty spots of North Wales, crosses the Menai Straits on Telford’s suspension bridge, near Bangor, and terminates with a twenty-two mile nearly level stretch across the island of Anglesey.

As regards the Brighton Road there are many ways to Brighton, the classical record route being by Purley, Horley, Crawley, and Handcross. The Brighton Road was associated with the earliest bicycle performances, when plucky pioneers trundled bone-shakers there in the day. Relay rides were also a feature of the days when cyclists showed they could beat the time of the Brighton four-horse coach. Innumerable cycling records have been made on the Brighton Road, but the extension of London southwards and Brighton northwards entails so much traffic riding that very few attempt the performance now.

Watling Street is probably the most ancient road in the Kingdom. It is supposed to have existed prior to the first Roman invasion, but it was the Roman conquest that caused it to be improved and extended. Originally, it stretched from near Dover to Wroxeter and probably north to Chester or Carlisle. Cyclists riding from Dover to London follow the line of the old highway by what is known to-day as the Dover Road; the Street went right through the heart of London, issuing at Edgware.     Near St. Albans, the Holyhead or Birmingham road makes one division from the old Roman track, but returns to it and makes use of Watling Street all the way to Weedon. Here it turns to the right, away from the modem road, and, with two breaks (where the Street crosses fields), continues in an uninterrupted line through Atherstone to a point near Lichfield. It is picked up again near Brownhills and continues from there to Wroxeter, between Wellington (Salop) and Shrewsbury. It is largely used by London and Birmingham cyclists as a through route to the gate of North Wales (Shrewsbury), partly because it avoids practically all large towns and on account of its occupying high ground from which extensive views are obtained.

The Fosse, the second ancient road in importance, once known as a Royal Road or King’s Highway, stretched from the Lincolnshire coast to a point in Devon near the mouth of the river Axe. Cyclists use the modern Fosse from Lincoln to Newark-on-Trent, Bingham, Syston, Leicester, and Narborough, almost to the Warwickshire boundary. They will find it ride- able, although mostly a gated road through Warwick- shire, and it emerges as a highway again near Halford Bridge. From Halford it is the main road to Moreton-in-the-Marsh and Cirencester. Below Cirencester it can also be followed to Bath and beyond, but is not a rideable road beyond South Petherton, in Somerset. Both Watling Street and the Fosse are best known for their directness in making from one point to another, but they are not straight, as is popularly supposed, except in the sense that they were laid out in straight stretches of about nine miles or so in length between pre-determined spots.

The popularity of cycling in this country is due largely to the excellent network of roads we possess. The surfaces, it is true, are fast deteriorating owing to abnormally heavy traffic which they were not constructed to bear; nevertheless, Great Britain has probably better roads, from a cyclist’s view point, than any other country in the world. When I say better I do not allude to surface alone, but to their suitability for the tourist and the follower of the pastime generally. Our British roads and lanes are not made in straight lines like many Continental roads and by-roads; consequently they are more interesting to traverse and seldom monotonous. In fact they are the reverse, because every turning brings some interesting view before the rider’s eyes. There is nothing so monotonous when cycling as to follow a perfectly straight road. Even long distance airmen will tell you that flying in a straight hne for hour after hour becomes terribly irksome, and they often yearn for the motor or cycle and the turnings and twistings of the road.

The increasing amount of motor traffic and the possible conversion of some main through routes for the use of motor-cars alone has caused the Transport Ministry to consider the question of making special cyclists’ paths. Whether these ultimately will be constructed is conjecture at the time of writing, however, such paths for the sole use of cyclists are quite common in some parts of the Continent, notably in Belgium, Holland, and France.

In the rural districts the paths are used by cyclists and pedestrians together, and it is only near populous parts that the special cyclists, paths, are reserved for their exclusive use. 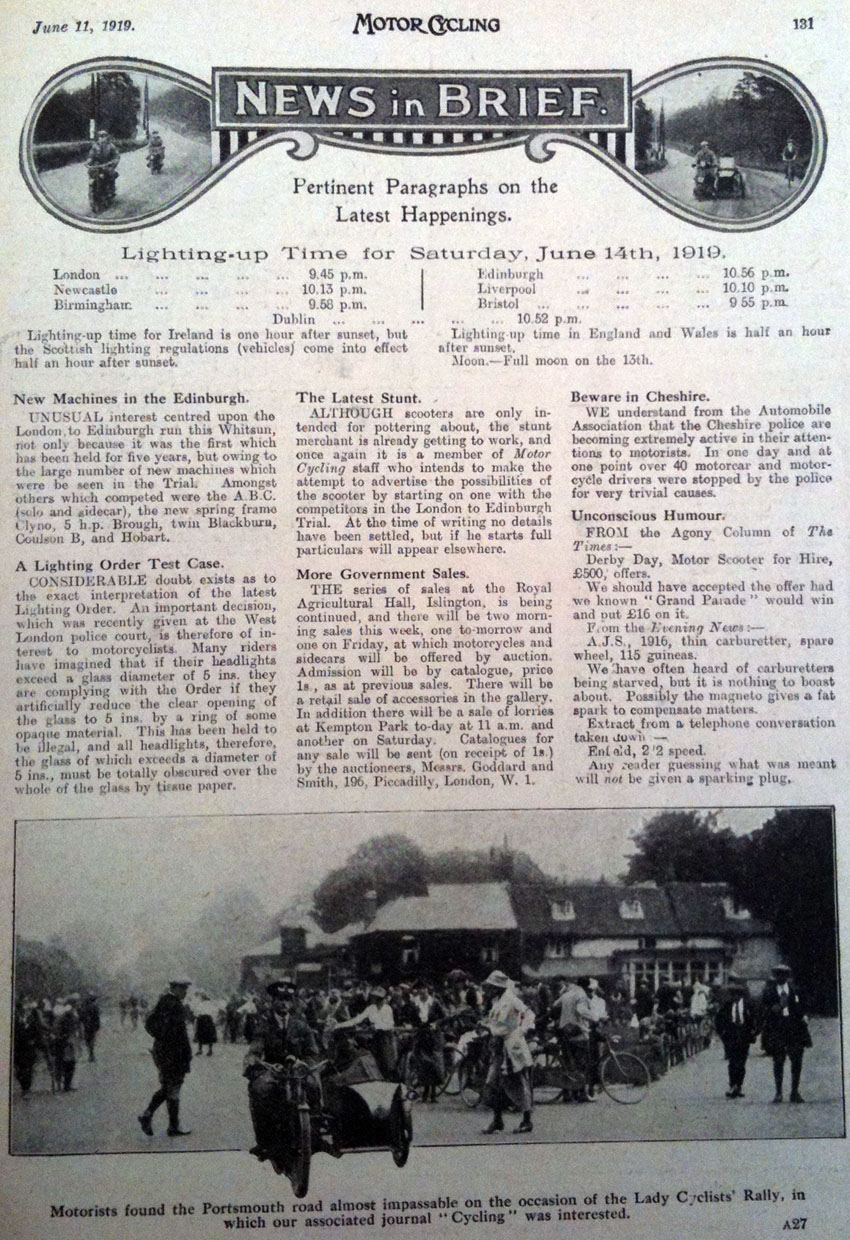 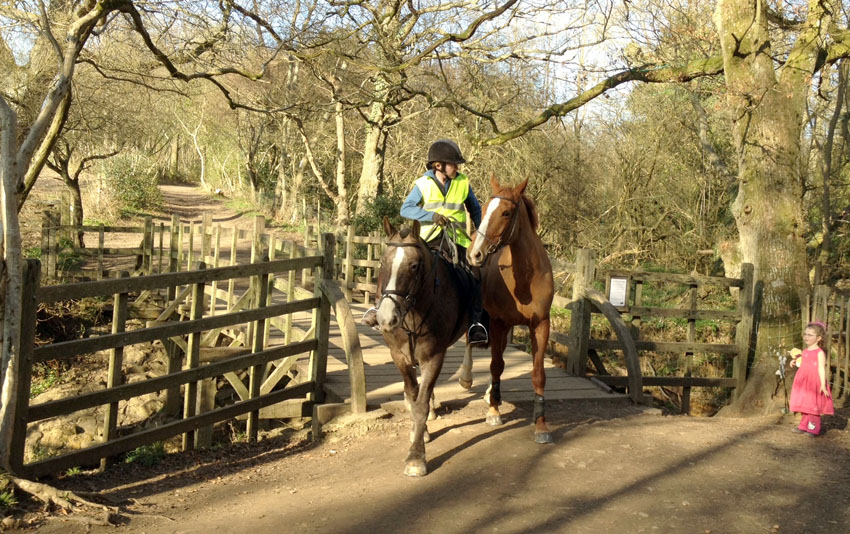 As I started this page with a quote from Pooh, I’m ending with Pooh too.

Pooh Bridge (above) is not far from our house, so when our daughter was young it was  one of our favourite rambles (with a rest stop at Pooh Corner Tea House in nearby Hartfield).

The local game is ‘Pooh Sticks’ which involves throwing sticks over one side of the bridge and then dashing to the other side to see whose stick flows by first. (Our daughter Delphy and her friend Pooh Bear invariably won). 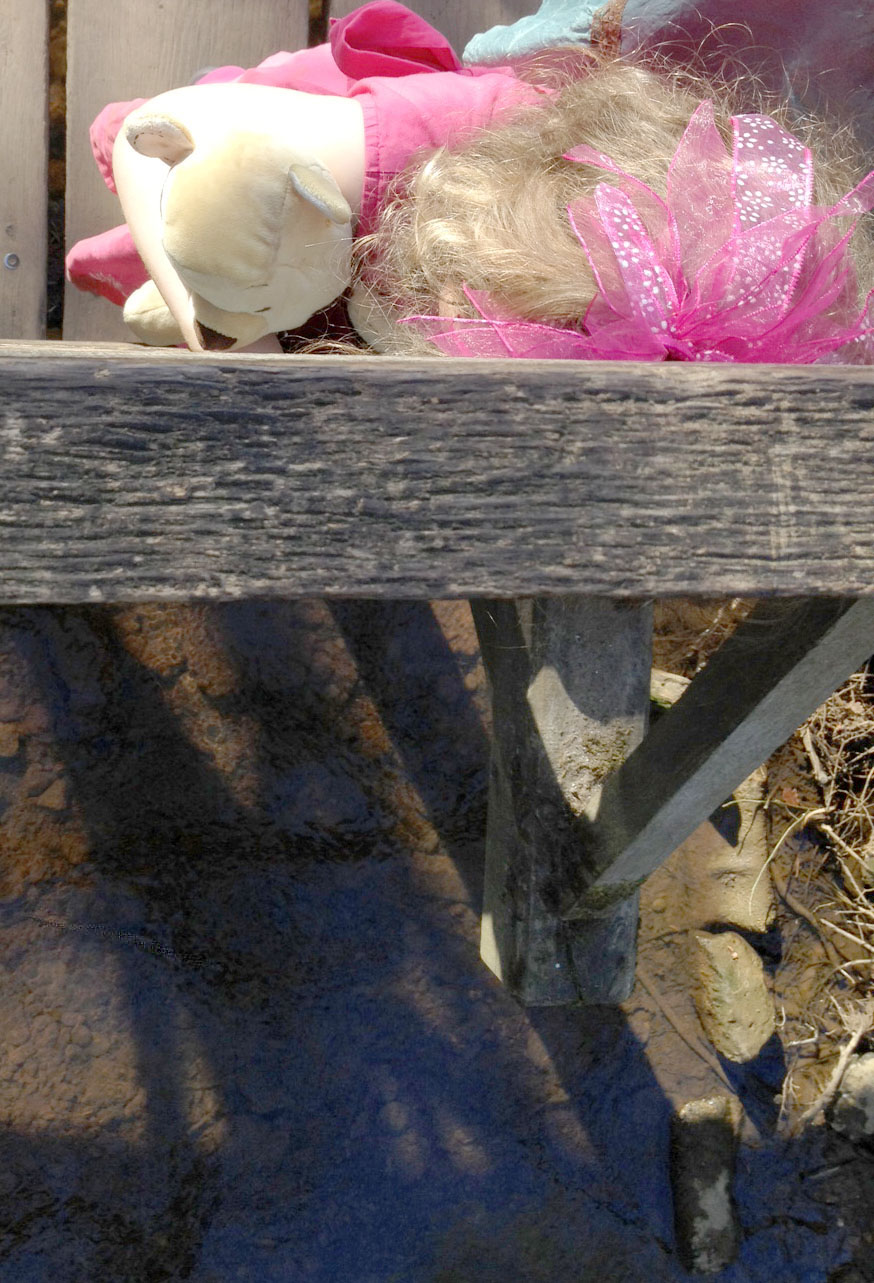