1870s Children’s Carriage in Style of a Boat 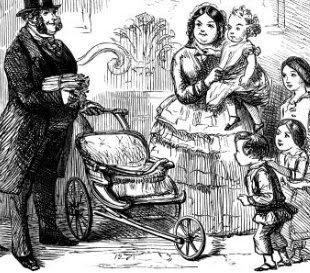 We are glad to observe a disposition on the part of the metropolitan magistrates to contest on our behalf the last piece of ground which has been left to the unfortunate pedestrians of the London streets. The fooway is, it appears, still our own, and we are to be protected in its enjoyment. The case of Mr. George Peachey, who was sujmmoend the other day before Mr. Knox at Marlborough-street, will, we trust, be a sufficient warning to those who venture to encroach upon our rights in this respect. Mr. Hetton, of Twickenham, the complainant in the case in question, said that on the 25th of July, he was walking through Rathbone-place with two friends when the defendant drove a perambulator against him. On being remonstrated with, the defendant told him he ought to get out of the way. The complainant replied that if the defendant ran against him he should charge him with assault. The defendant thereupon caleld him a blackguard, used the most abusive language to him and his friends, and a second and third time ran the perambulator purposely against him. The defendant, refusing to give his name and address, witness gave him into custody. The perambulator was a large one, and took up nearly the whole of the pavement. The case being clearly proved against the defendant, Mr. Knox observed that it was monstrous to take up the pavement with these perambulators, some of which were of large dimensions. The pavement was for passengers, not for vehicles of this kind. He refused to look closely into the charges and counter-charges of rough language; the evidence had made it clear that the defendant was pushing a perambulator on the pavement, where he had no business, and that he drove it against the complainant. He would have to pay a fine of 20s. and costs. We hail this decision with much satisfaction; for if, after the cabmen have driven us from the roadway, the pavement is to be made impassable by the “furious diving” of large perambulators, we may as well give up the attempt to traverse the streets at all.

Unique Body in the Style of a Boat

‘Baby carriages’ or childrens carriages’ were luxury conveyances manufactured for rich American families, and they became popular in the Victorian era. It’s interesting to observe how they were in fact miniature versions of horse-drawn carriages of the day.

This particular example may have been specially commissioned. The hickory chassis and wheels and metal springing are similar to others of the era, but the unique style of the body, reminiscent of a boat – including a faux propellor blade (below) – suggests it was made for the family of a well-to-do nautical gentleman.

I’m not sure of the manufacturer, but I’ve reproduced some pages from the catalogue of one of the top American builders, Heywood, for comparison; and, further down the page, some adverts from British builders c1890. 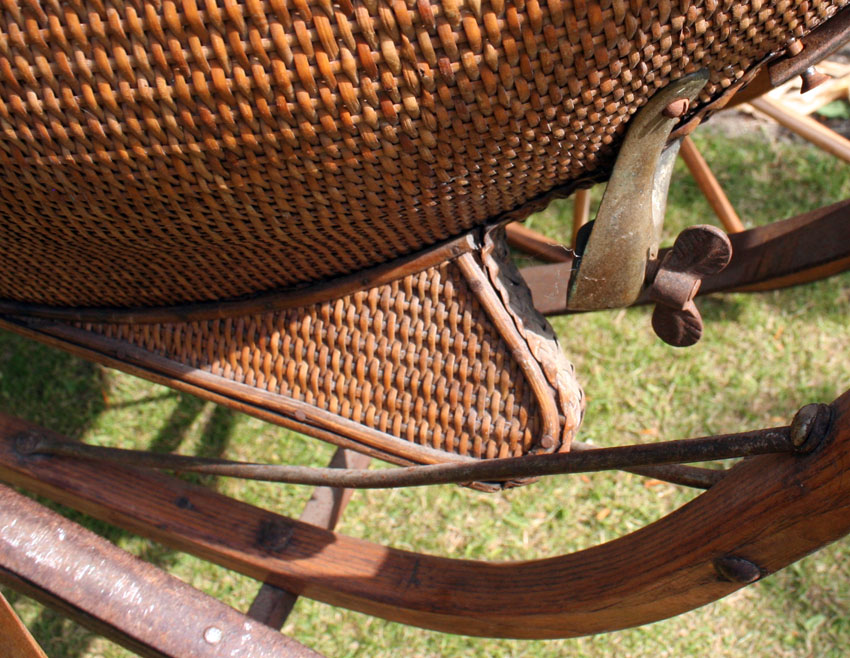 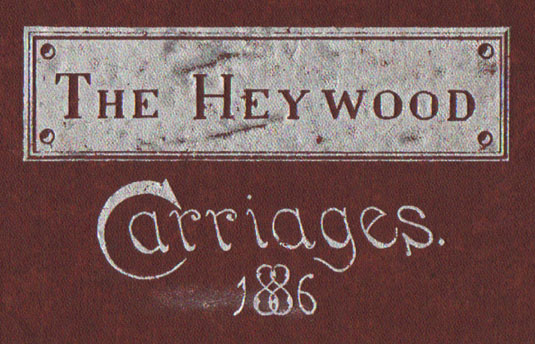 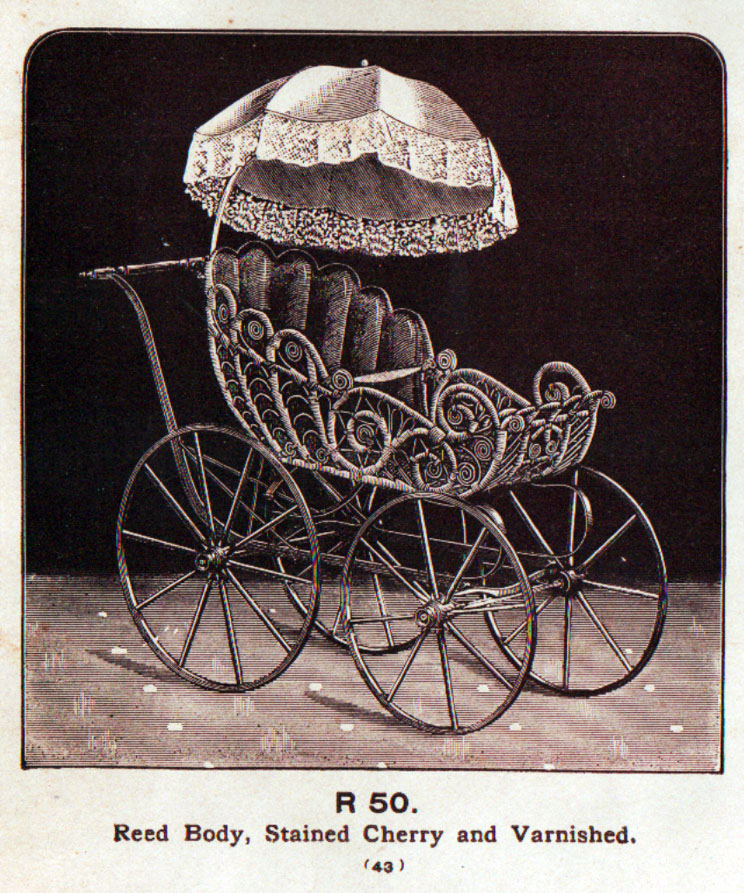 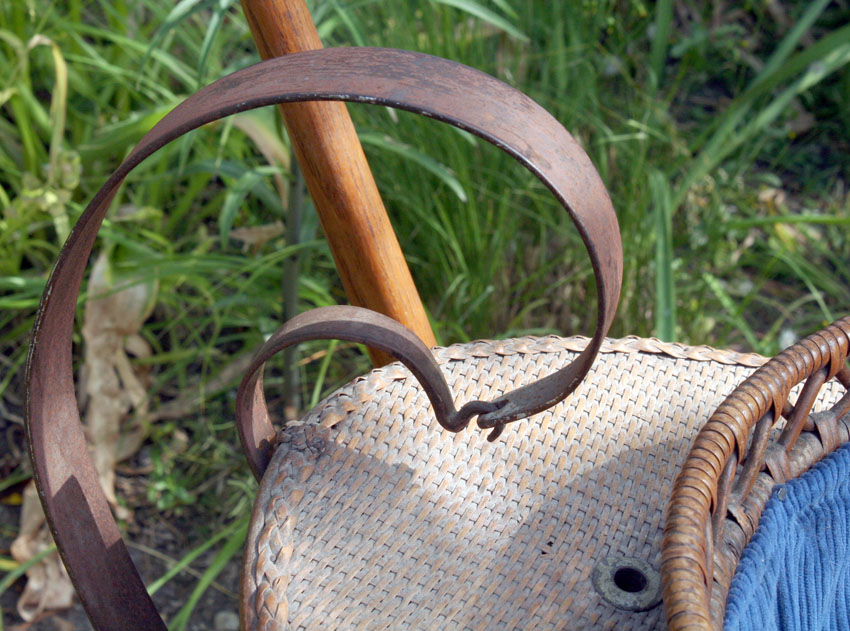 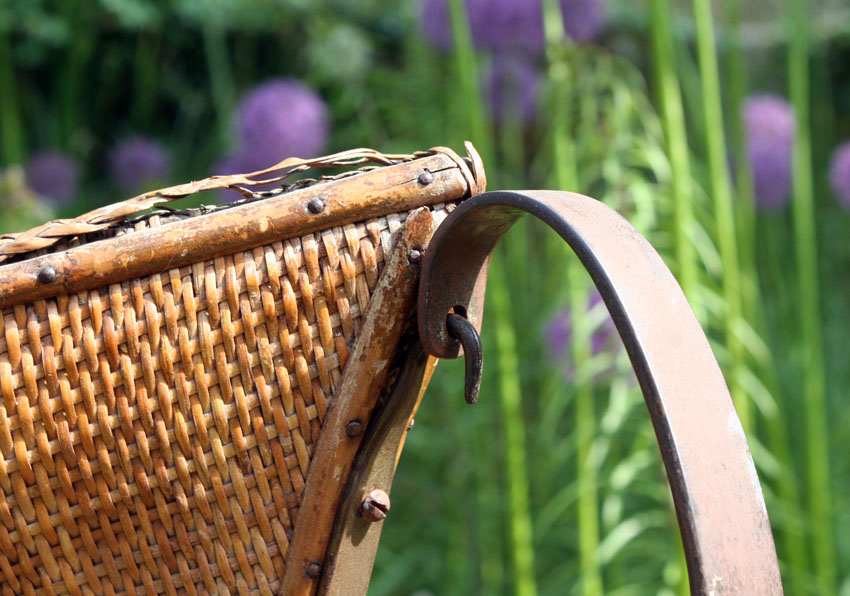 The pram, a baby carriage for infants and toddlers, is mainly a Western and urban phenomenon that developed in the 1800s. Before 1800 babies were seldom carried outside of the home. When transporting babies was necessary, they were swaddled in clothing or, among the upper classes, carried by nannies. Between 1650 and 1800, a few examples of children’s carts, copies of the adult equipage or cart, are known to have existed in the aristocracy. The famous English architect William Kent presumably designed an abundantly decorated baby carriage for the children of the Third Duke of Devonshire in 1733.

The first prams normally were made of wicker–not unlike a cradle mounted on (often three) wheels. The child sat in the carriage, but in the mid-1800s prams were altered so that they could be pushed and not pulled and the child could lie down to sleep. From the 1860s through the 1870s use of the pram was widespread in bourgeois families across Europe and Northern America, as prams and promenade carriages became status symbols.

The production of early prams involved the collaboration of a wicker worker, a smith, and an upholsterer or saddler, but soon pram production was overtaken by carriage builders who specialized in the manufacture of complicated wheels. Later, prams were produced in particular factories and, in the 1880s, multiple folding prams were introduced.

Until the 1880s, Great Britain had rules about four-wheeled prams not being allowed on the pavements, which meant that most prams made before that time were three-wheeled. But no such regulation existed in America.

The general design of prams has varied greatly over the years, running the gamut from the horse-drawn carriage to automobiles. From 1870 to 1920 prams had exceptionally high wheels, but in the 1920s and even more so in the 1930s the body of the pram was made deeper and the wheels smaller, which made the pram more steady and secure. At the same time the design was streamlined and made more functional. After World War II, the pram, inspired by American and English automobile fashion, again was made higher. The stroller or push chair dates from the 1920s, but it did not become widespread until the 1950s and 1960s due to increased mobility.

The use of prams reflects broad cultural changes concerning hygiene, urbanization, social development, and changing views of childhood, parenthood, and gender. With the introduction of pavement in urban and suburban areas in the mid-1800s, the pram became a practical means of transportation. Yet transportation was not the only purpose for prams, for in the 1880s light and fresh air were considered important in the nursing and care of young children, and doctors recommended that all parents use prams. The general economic welfare after World War II made prams more available to middle-class families, and the pram and stroller industry grew. The pram provided women–both mothers and nannies–with greater mobility. They were liberated from home and enjoyed a wider radius of action. 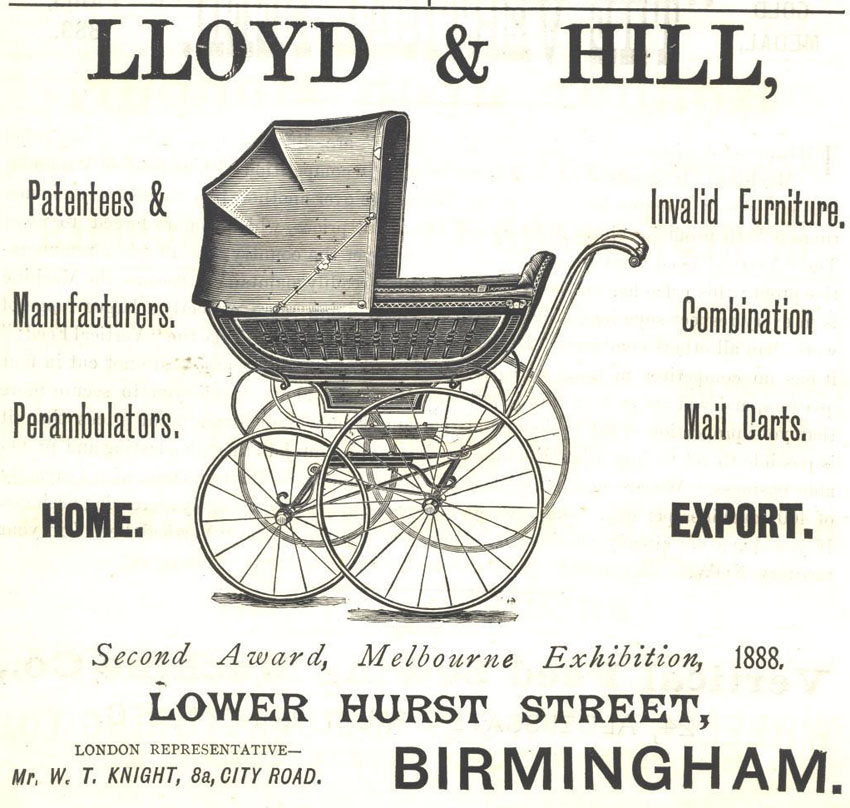 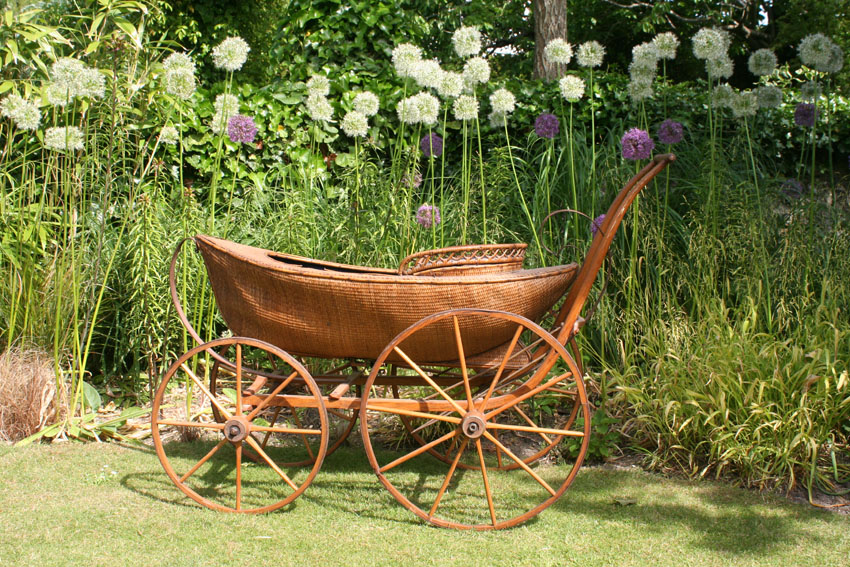 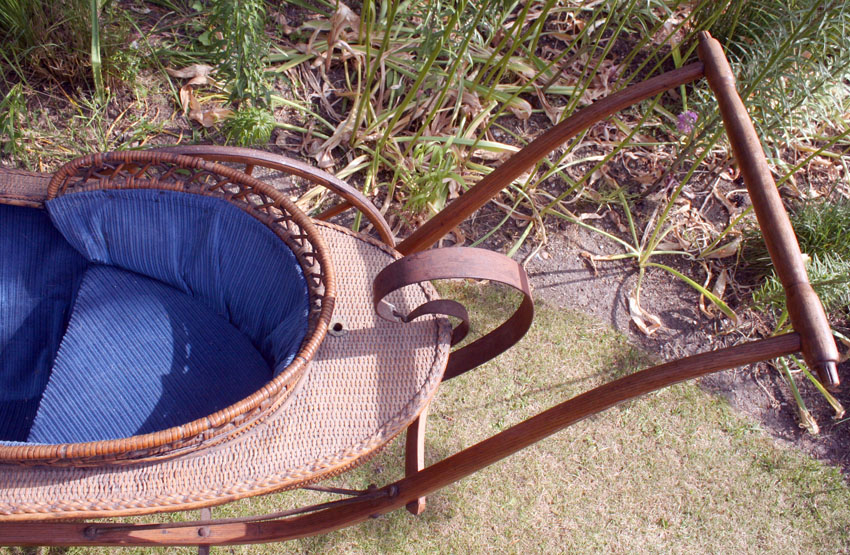 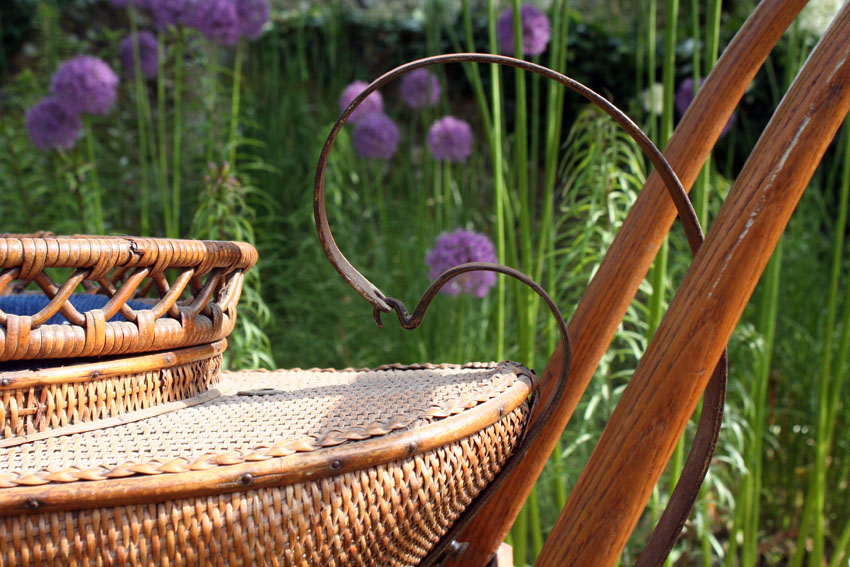 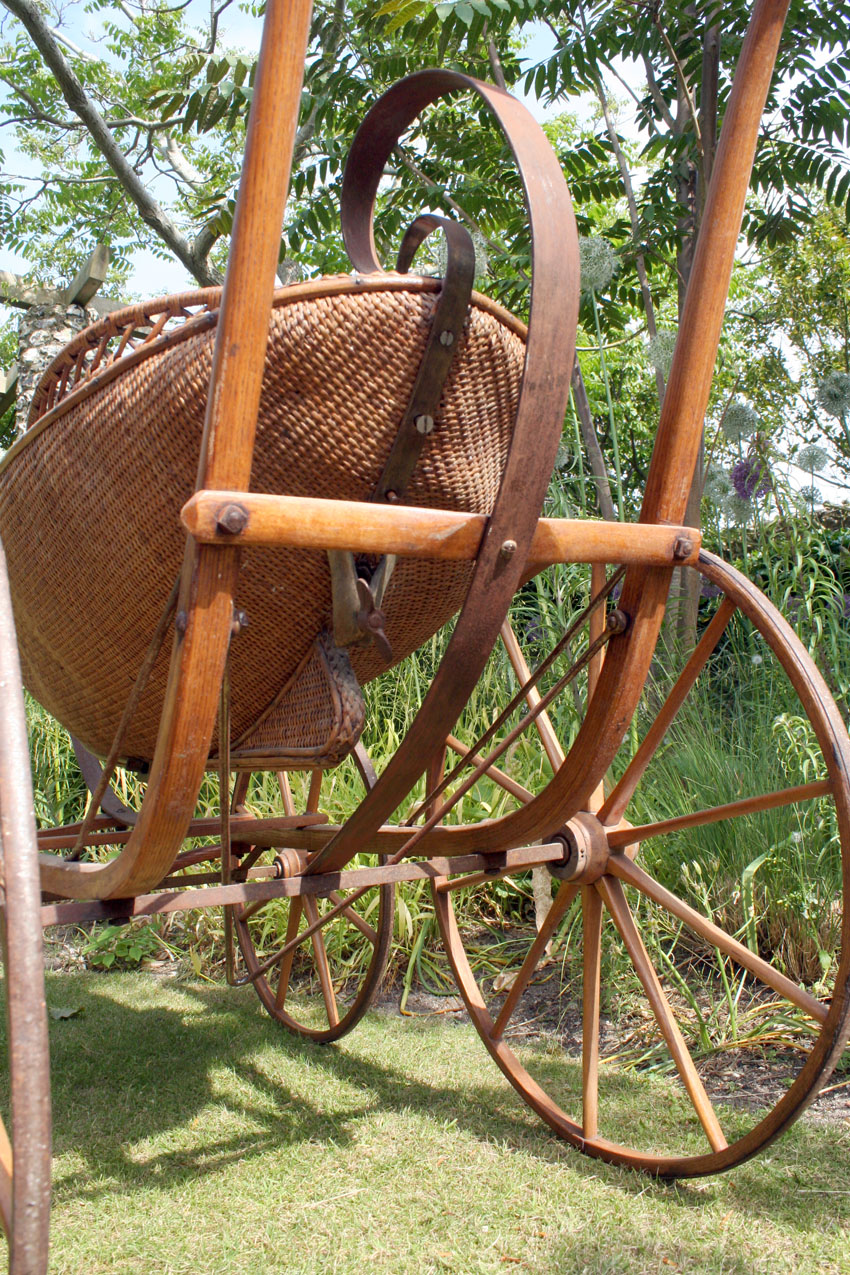 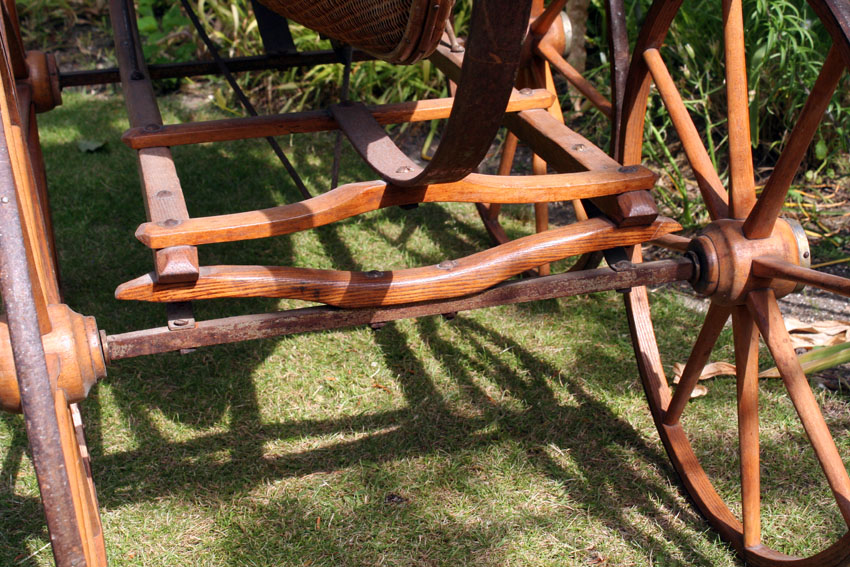 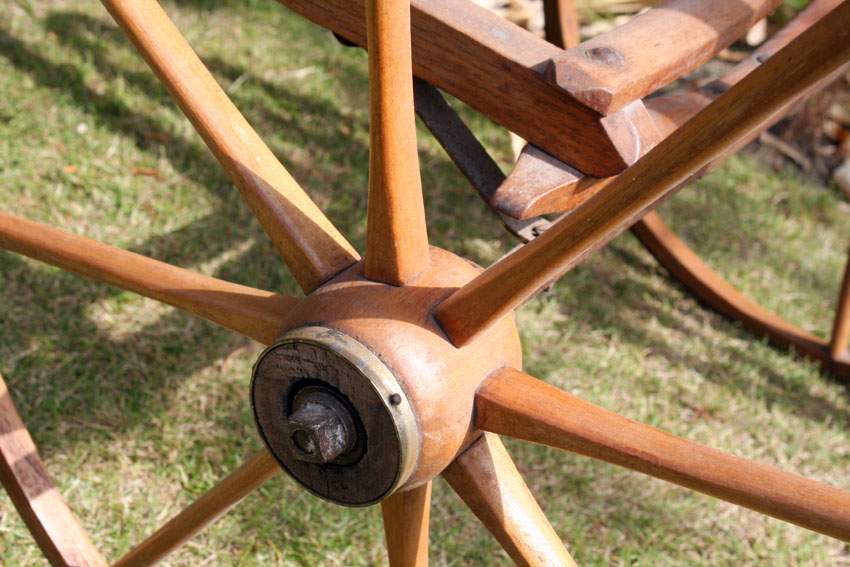 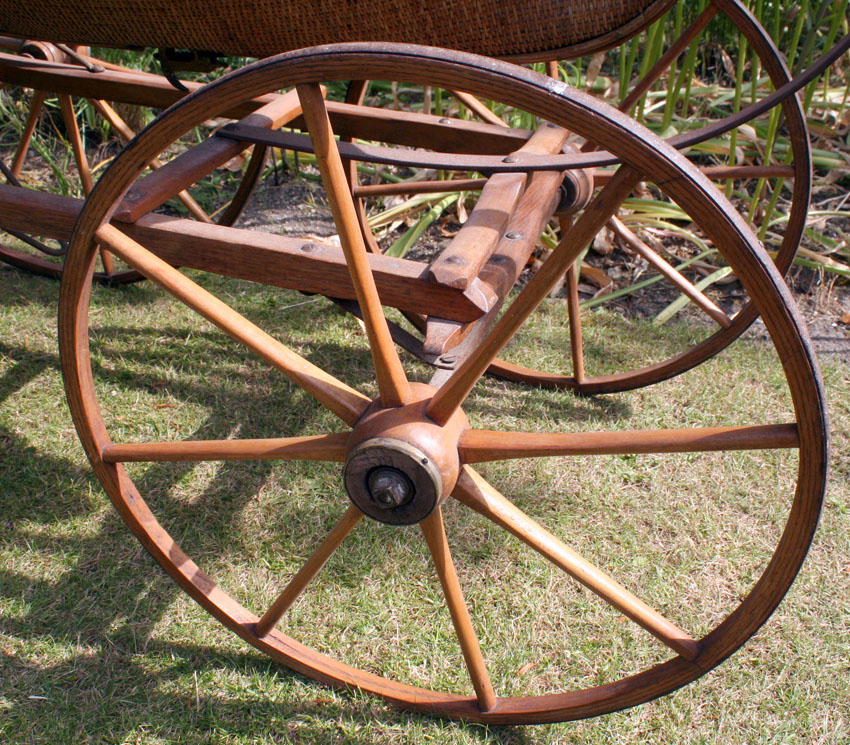 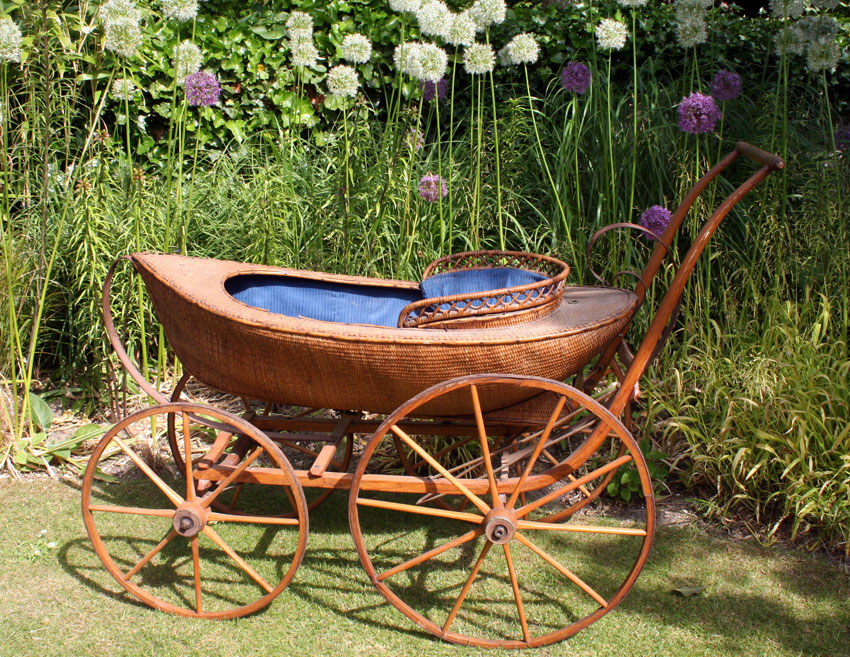 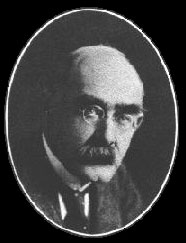 Many great writers have lived in and loved Sussex, with its hilly landscape and glimpses of the sea, including Rudyard Kipling, who moved here in 1897 and stayed until he died. He lived first in Rottingdean, near Brighton, when he moved into his aunt’s holiday home, just a stone’s throw from the sea. It was here that he wrote many of his much-loved ‘Just So’ stories. The family were so happy in the village, they finally rented a house for themselves -The Elms, on the edge of the village green – for the princely sum of three guineas a week.

The former walled garden adjoining Elms House became completely derelict during the latter half of the 20th century, and in 1980, had fallen prey to a potential housing development. But the local Rottingdean Preservation Society managed to raise the required £51,000 to purchase the land and since then the gardens – named after Kipling – have been restored and saved as a public space.

In 1902 Kipling and his family bought their own home in East Burwash – Bateman’s – a handsome Jacobean house, in the heart of the lush, green Sussex Weald. It had no bathroom, no electricity and only partial running water when they moved there, but Kipling fell in love with the house, and as one of the most famous writers in England, his annual salary of £5,000 was more than enough to purchase the property and make all the necessary changes to turn it into a family home. He remained here until his death in 1936. 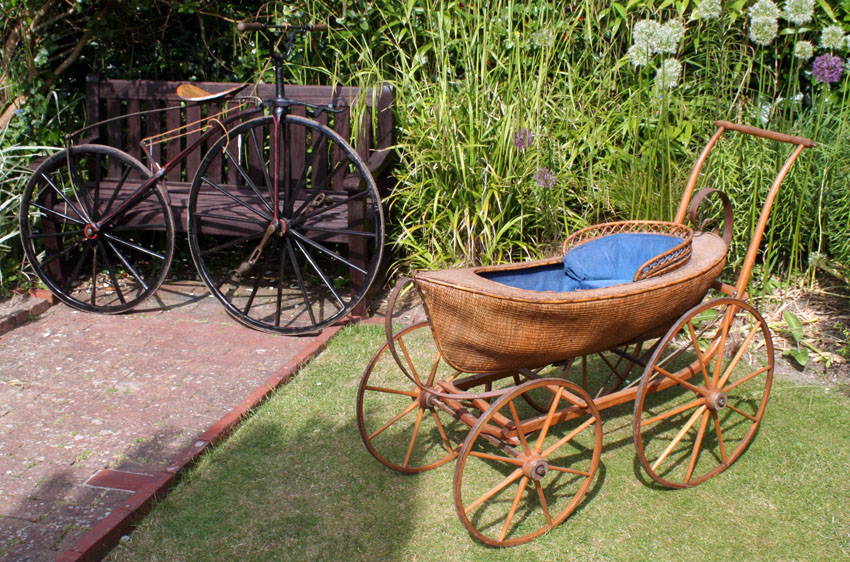 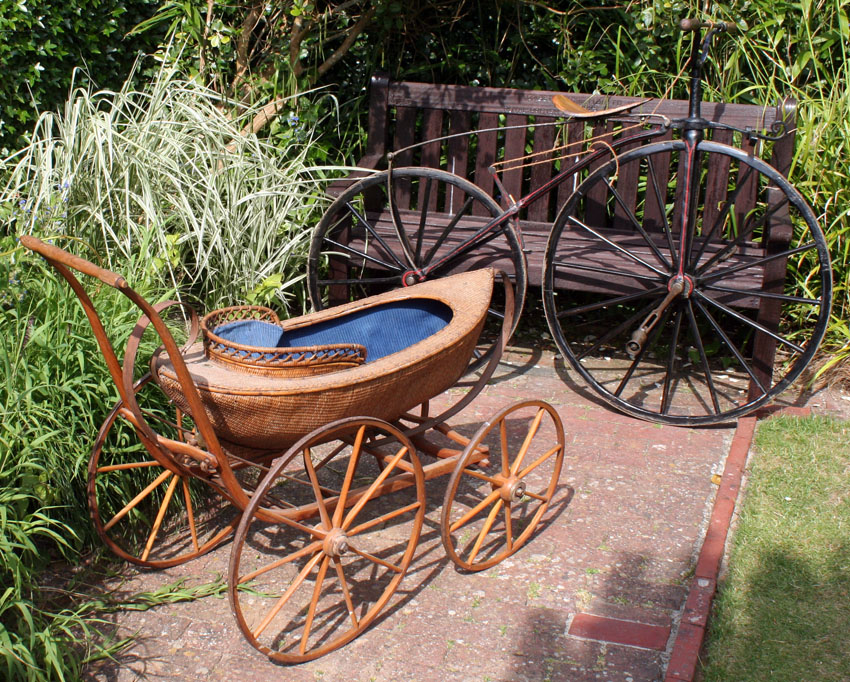 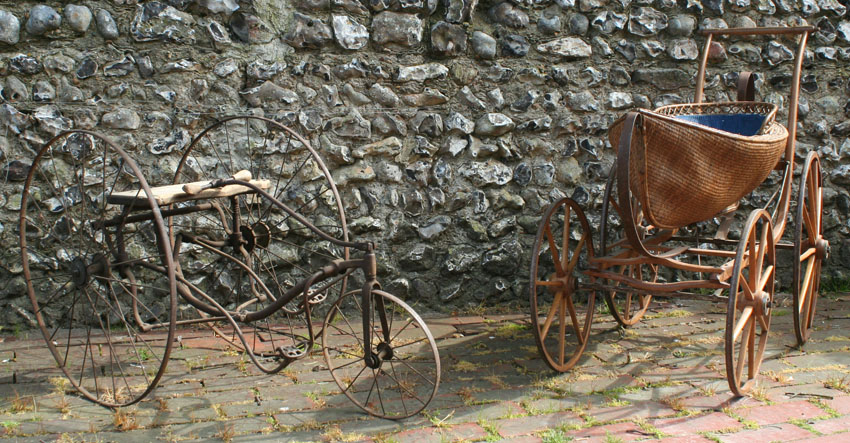 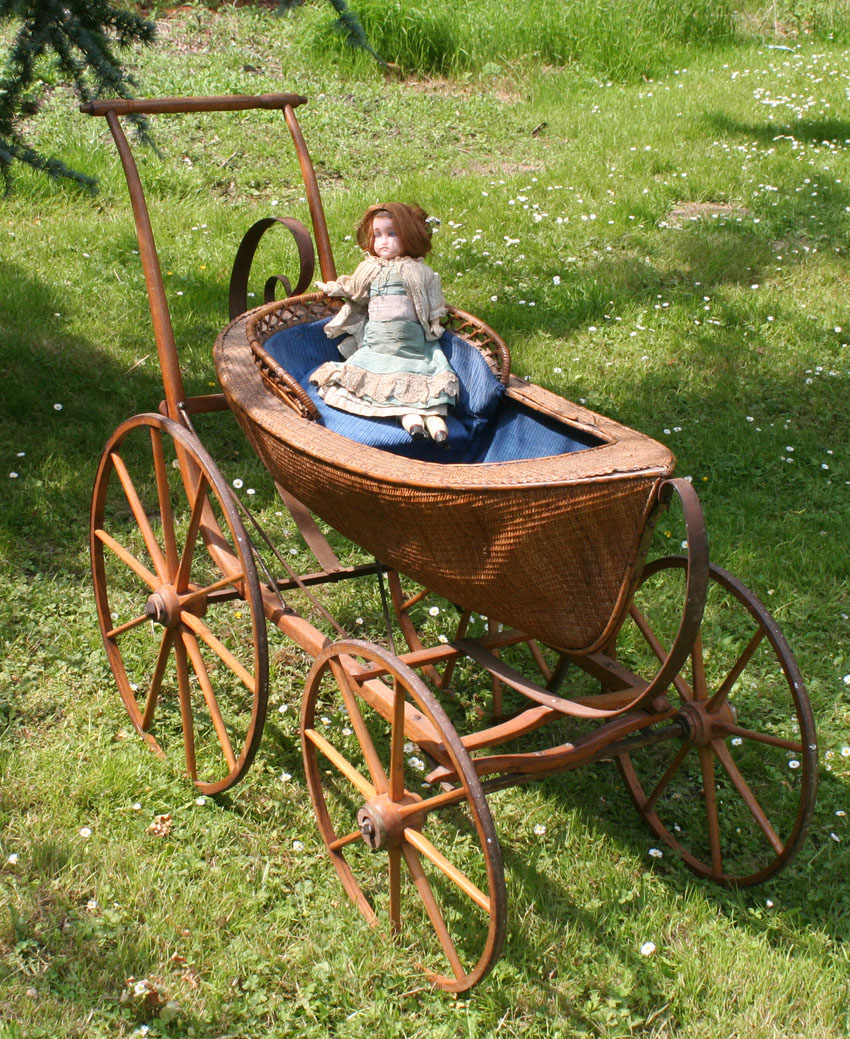 Her clothes are original: a silk taffeta dress with petticoats and lace hem; and her muslin jacket is decorated with French knots and lace trim. 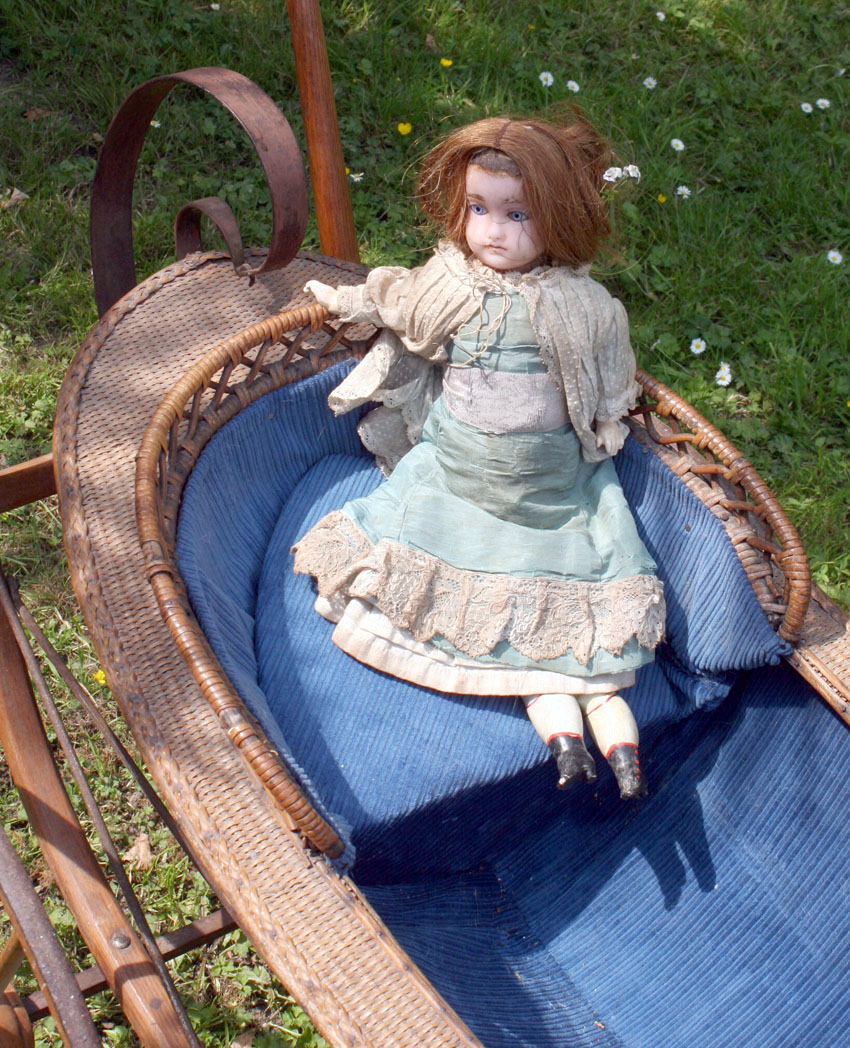 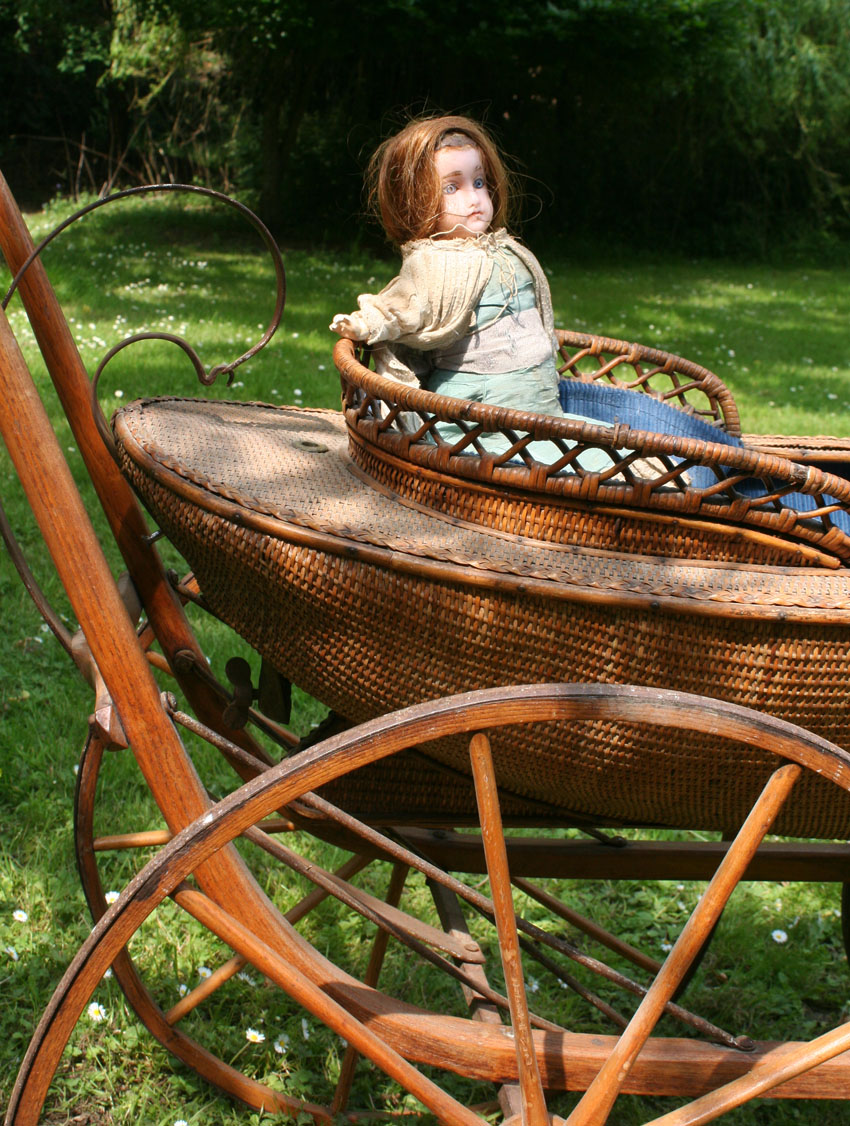 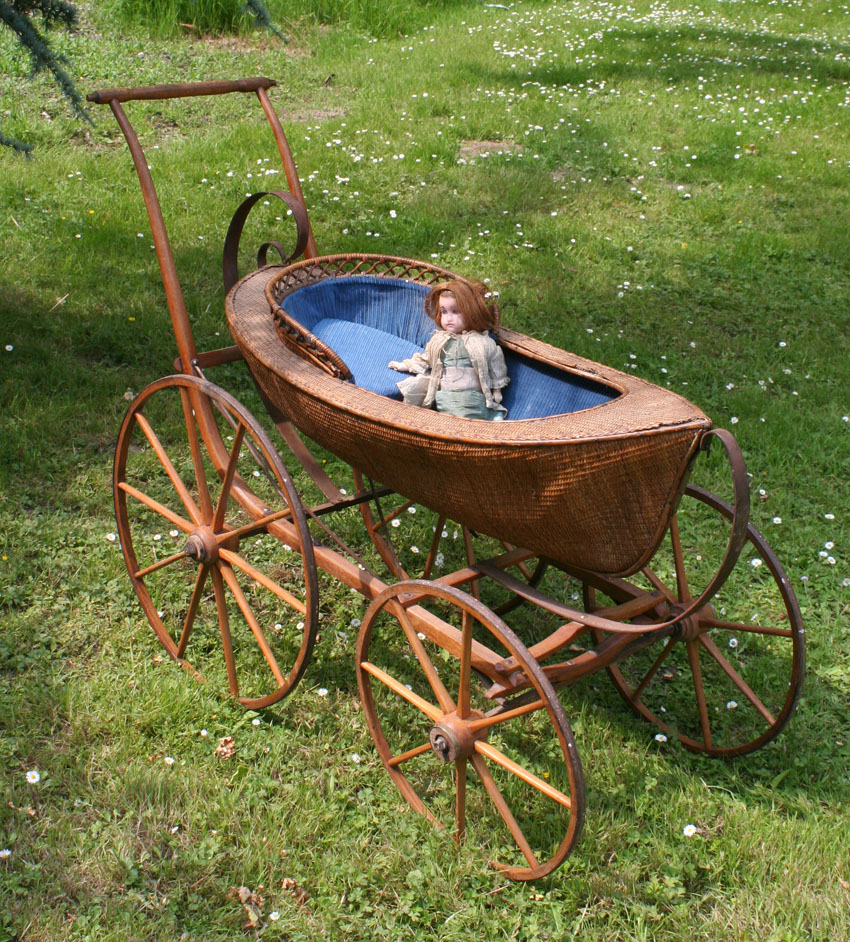