There are slightly different versions of the start of Pope Manufacturing Company, depending on who is telling the story. Most generally agree, but occasionally they conflict on details, particularly exact dates. George Bidwell, who later became Pope’s first superintendent of Agencies, recalled that the Colonel and his cousin Edward started out making a hand-held cigarette-rolling machine in a small factory at 87 Summer St. ‘This was in 187475,’ he remembered. Cigarettes were new, and there was only one pre-made brand, the ‘Sweet Caporal,’ so the simple little machine, run by hand and carried in a pocket, proved popular. ‘The business and the firm made plenty of money, enough to branch out and take on another line.

This ‘other line’ was the firm’s biggest pre-bicycle product, the ‘Pope’s Target Air Pistol.’ Nephew Harry Pope recounted that in October 1874, the Colonel purchased the rights to an advanced air pistol invented by Henry M. Quackenbush of Herkimer, New York. Born in 1847, Quackenbush apprenticed at the Remington Arms Co and began a career as a prolific inventor while still in his teens. His first patent was for an extension ladder, which he sold for $500. During the great velocipede boom, Quackenbush purchased a velocipede manufacturing licence from the owner of the all-controlling Lallement patent, Calvin Witty of New York, but in the end made only six or eight bone shakers before the boom collapsed. In 1871 he patented a spring-driven air pistol and, a year later, he began selling his ‘Target’ air pistol, a much-improved version that had the air chamber below the barrel instead of surrounding it.

In the fall of 1874, Pope and Quackenbush signed an agreement under which Pope took over the Target name and supported Quackenbush’s venture. Soon after entering into the contract, Quackenbush applied for a reissue of the Target pistol’s patent, assigning the rights to Pope. He also moved out of the cramped barn he had been using as a factory into a new two-storey plant in Herkimer and added a foot-powered scroll saw to his catalog of offerings. The following February, Quackenbush filed another patent, this time for air gun darts and their construction. He built four delicate, complex automatic dart-making machines and sold one to Pope. In January 1876 Pope received two patents in his own name covering improvements to the basic design of the Target.

However, a dispute developed sometime in late 1875 or early 1876 over the dart-making machine, which Pope’s men apparently could not get working right. Pope stopped making royalty payments and, according to Harry Pope, Quackenbush sued in March 1876. Pope and Quackenbush settled a few weeks later with Pope returning all the patent rights in both the Target Air Pistol and the dart-making machine. As in most business disputes, there was probably more at stake than either party was willing to admit in public. At least one of the other dart-making machines worked successfully for a century, until 1993, when it was retired by the Benjamin Air Rifle Co after producing two million darts.

A few days after Quackenbush filed the paperwork to reclaim ownership of the Target patent, he filed another patent for an even better spring gun action that formed the basis of his Number 1 Air Rifle. Introduced in late 1876, the Number 1 revolutionised the gun industry, and it is essentially the same action that all single-stroke-cocking air guns have used ever since. Quackenbush sold thousands before the patent tan out, earning a modest fortune. By yielding his patents and failing to get half the rights to the Number 1, Pope missed out on the payoff from his and Quackenbush’s two-year partnership, a mistake he later estimated cost him $100,000. From that point on the Colonel began to exhibit a level of sophistication in patent matters that was exceeded only by his ruthlessness and tenacity.

…Although Pope may have got burned by Quackenbush, he continued to carry his air pistols, and one eyewitness to the early days specifically recalled that after Pope became interested in bicycles he ‘carried them in his air pistol store in Boston.’ The firm featured an engraving of an air gun on the company letterhead as late as 1880.

– Peddling Bicycle to America: The Rise of an Industry, by Bruce D. Epperson (pages 21-23)

The manufacture of pistols and rifles, which flourished in America in the 19th century – particularly as a result of the Civil War – is an integral ingredient in the history of the bicycle. All arms manufacturers started in small workshops. The successful ones employed staff or merged with others. Having established engineering workshops, and production lines and also negotiated distribution networks, usually via larger arms companies, they were in an ideal position to capitalise on the popularity of the bicycle when it arrived.

Arms and bicycles shared similar metalworking techniques. But the main point in common was the need for constant innovation and invention to refine each product. The start of the cycle industry – and the automobile industry that followed on its heels – was an era where ordinary working class men, engineers and toolmakers, through experimentation and diligence, could refine an existing product and receive immediate rewards from a manufacturer. In fact, creating and patenting a prototype, or patenting ‘improvements’ to a product, was usually more financially rewarding than actually manufacturing it.

As this era was also the beginning of the modern advertising industry – which got rich and evolved directly as a result of sales of guns, bicycles and then cars – we are able to observe this time in history easily a century and a half later through magazine advertisements. Patents are also available to help us piece together the early history of the bicycle industry.

The final aspect that connects the rifle, the pistol and the bicycle is the style of this ‘Target’ air pistol. It is a long-barreled pistol with a detachable stock. By connecting the wire stock, the user can fit it to his shoulder, turning it into a rifle. Note that Pope’s advertising, below, describe it as a ‘Rifle Air Pistol’ for this reason.

This air pistol predates bicycles. But, some years later, in the late 1880s, by which time the bicycle boom was in full swing, Stevens advertised their own ‘Pocket Rifle’ as the ‘Stevens Bicycle Rifle.’ The ‘Stevens Pocket Rifle’ had been introduced in 1869, and was a single shot .22 and .32 pistol shaped gun with a rifle barrel, also with a detachable wire stock.

Because the stock was easily removed, the gun could fit into a short case and be mounted under the crossbar of a bicycle. It was ideal for a cyclist to use for target practice or hunting. It’s also interesting that whereas a conventional rifle is too cumbersome to use one-handed, a ‘bicycle rifle’ could theoretically be used with one hand, with the stock at the shoulder, while the cycle was being ridden; this aspect was not advertised – accuracy would be suspect in such circumstances – but I have little doubt that a young chaps out on his bikes with bicycle rifle attached would have noticed a similar opportunity. You can see the Stevens Bicycle Rifle on the next page. 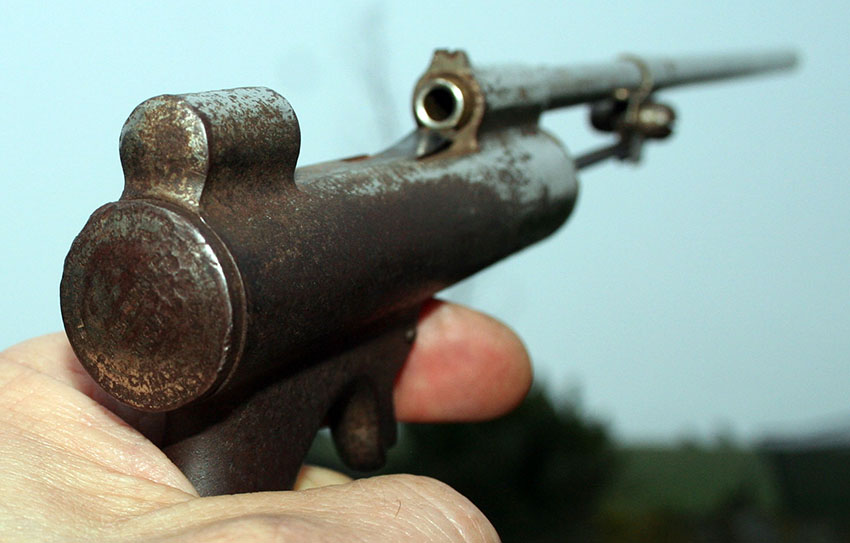 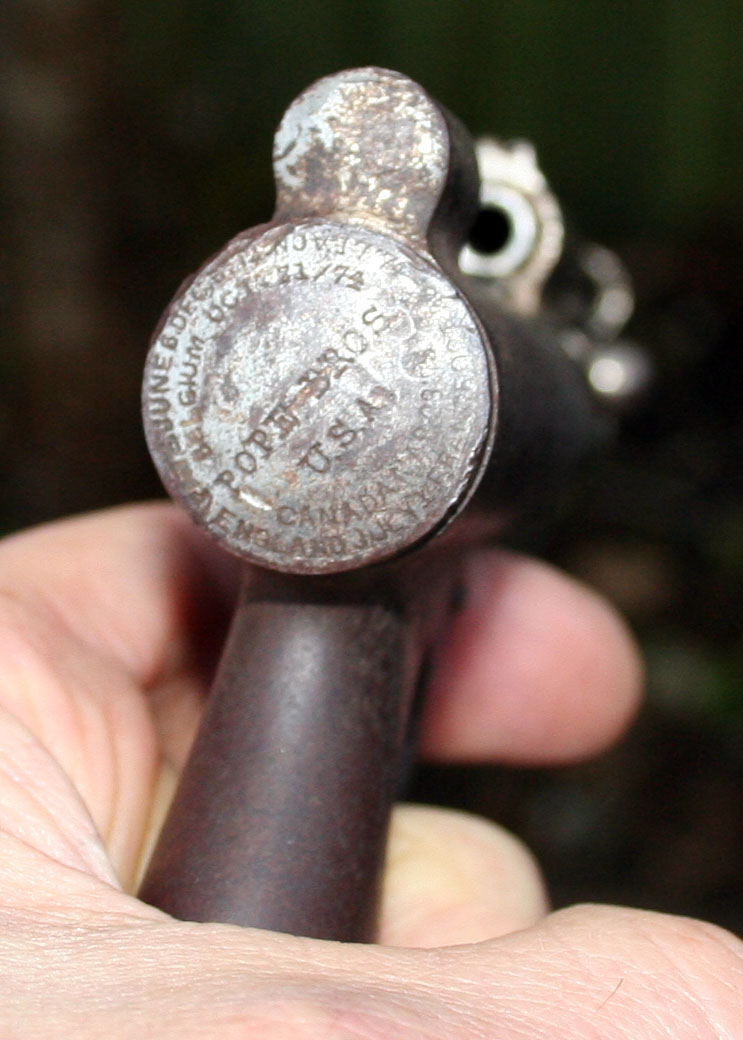 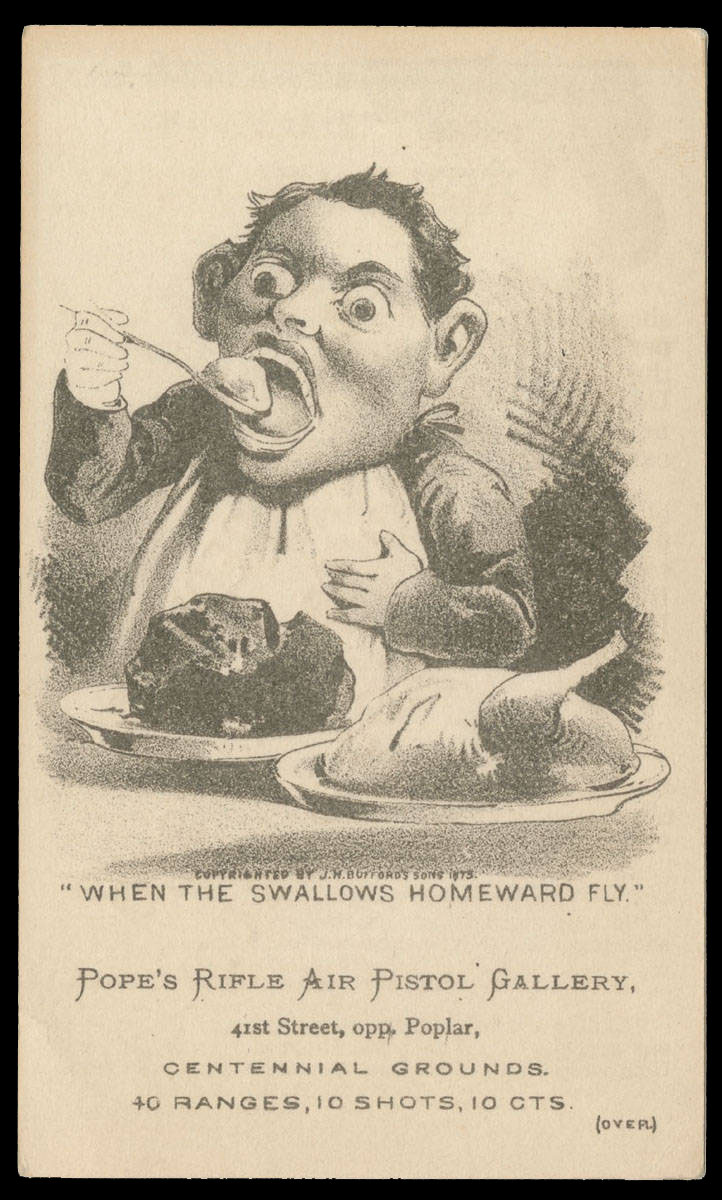 The ‘Target’ air pistol provides some fascinating insights in particular into the history of the Pope Manufacturing Co, being the venture established by Colonel Albert Pope, in 1875, prior to his cycle importing and subsequent manufacturing business (1878).

Brothers Albert and Edward and father Charles Pope created the Pope Manufacturing Co, in business to:

The Pope ‘Target’ air pistol was intended as a short-range target pistol that could be used indoors or out and was sold in a box with various accessories. These included a shoulder stock made of bent rod, a ramrod, targets, pellets and darts. The shoulder stock could be fitted into a hole drilled in the butt of the pistol, hence the title ‘Rifle Air Pistol.

The pistol is cocked by pulling the barrel forward to compress the spring. This exposes the breech for loading, the barrel being slid back in to its rear housing ready for firing.

The complete pistol set, with all its accessories cost $5. Nickel plating cost an extra $1.

The sales literature made much use of testimonials from satisfied customers, the most notable of which was General WT Sherman. 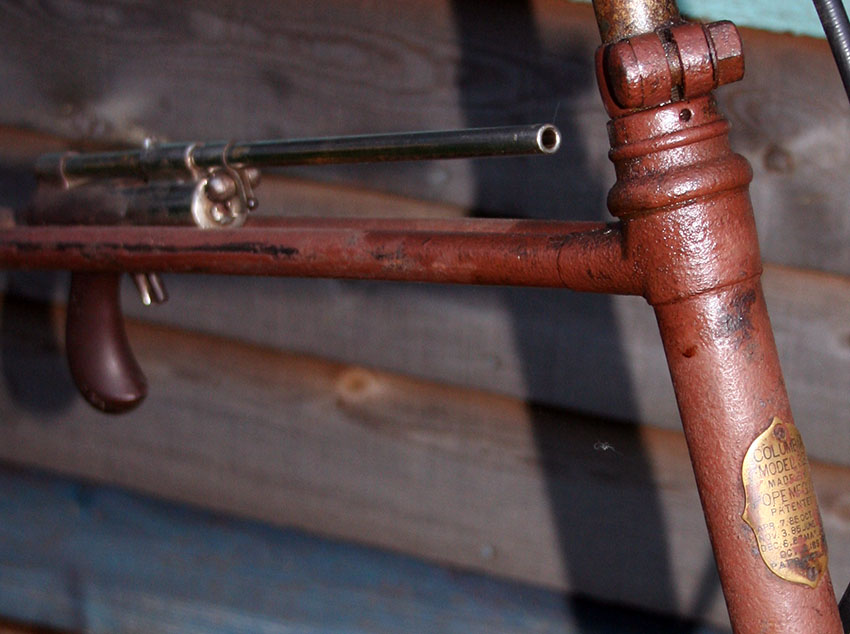 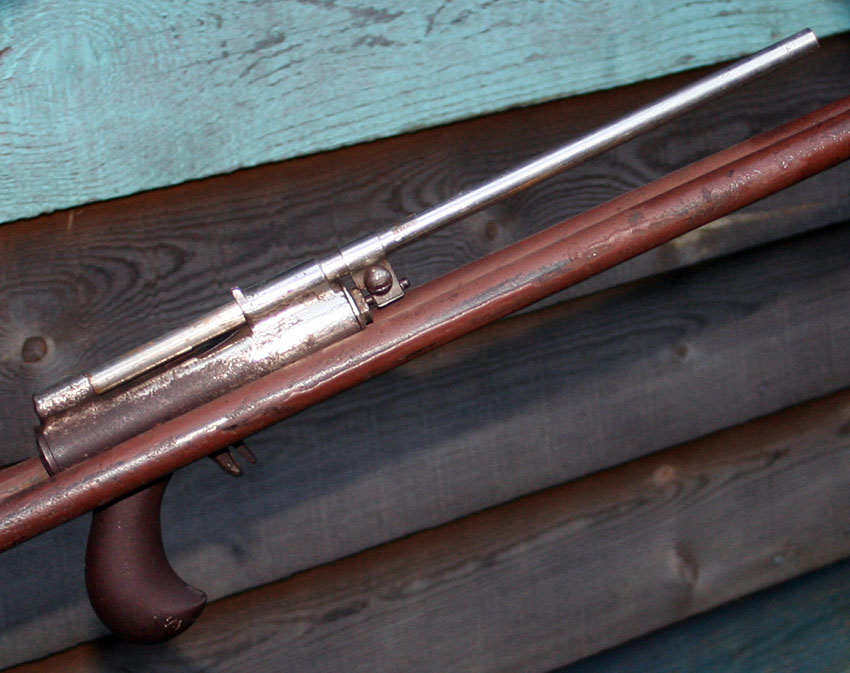 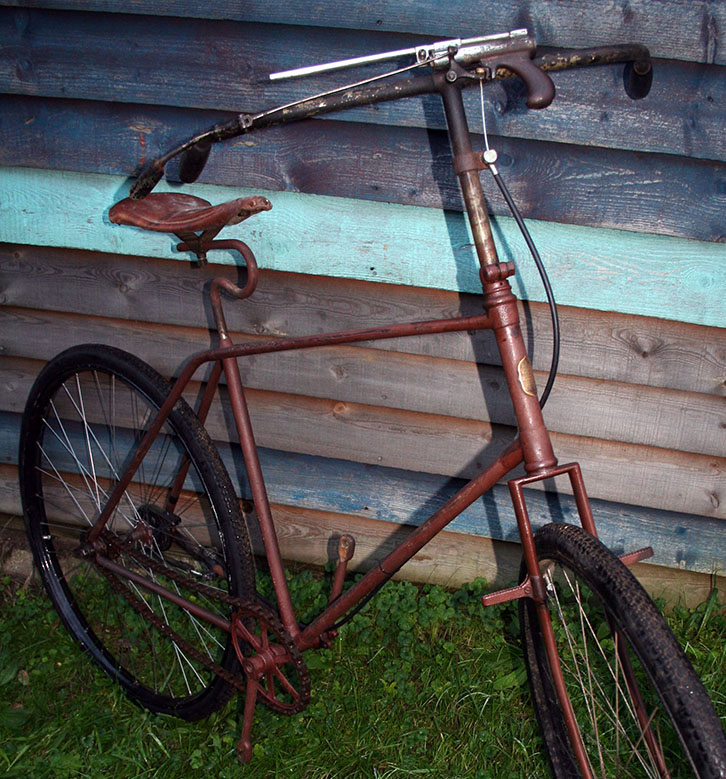 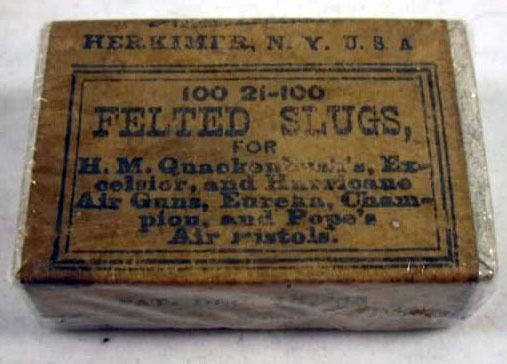 Above, felted slugs for the Rifle Air Pistol. Below, a 1902 advert showing the Improved Quackenbush Bicycle Rifle. 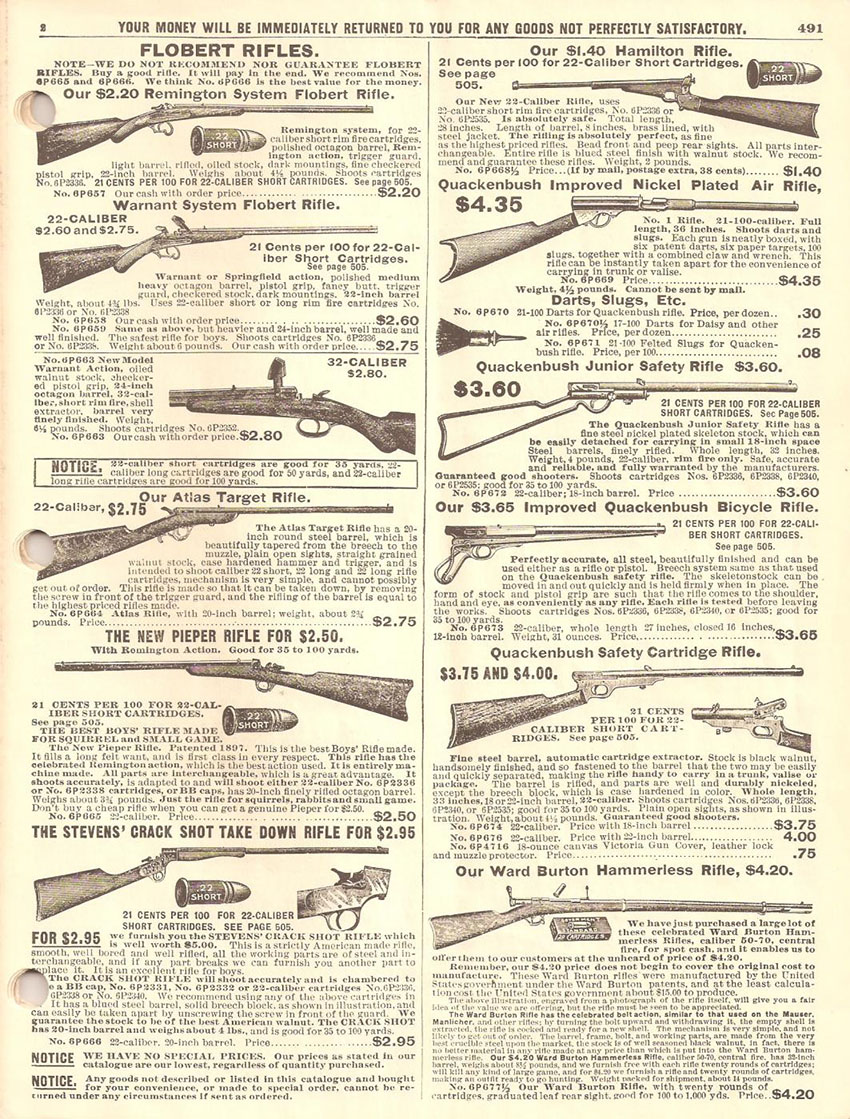 Observe the new design of skeleton stock on Quackenbush’s Improved Bicycle Rifle: whereas the first version was extremely basic, and its wider angle was not ideally suited to lining up the sights, the Improved version, patented in 1896, is housed alongside the rifle frame for easier storage and slides out easily, at a much better angle.

Although the advert shows an ornate handle on the end of the skeleton stock, the examples I’ve seen have a plain handle. 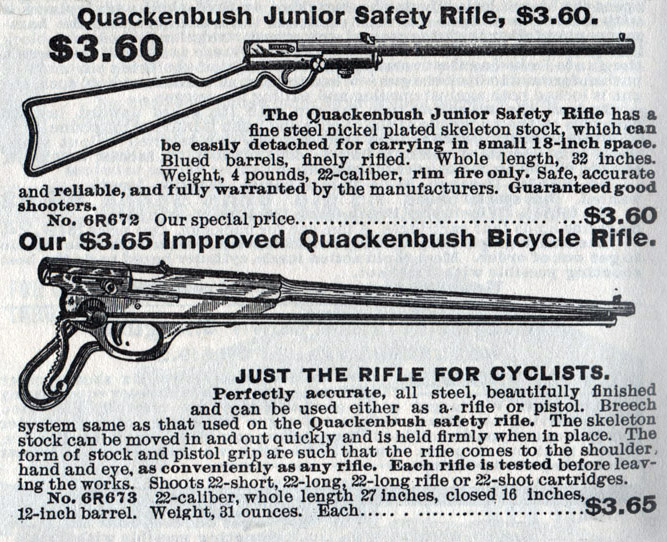