Skating is an art to which all ladies should attain. It is especially feminine in its character, graceful, elegant, requiring little apparent force, and yet affording good exercise. Ladies soon learn to skate. I have had the honor of initiating several ladies to the art, and have been surprised by the felicity with which they learn it. Whether from some innate quality of the feminine sex, I know not, but it is invariably the case, that if a boy and a girl, or a gentleman and lady, of equal ages, and having enjoyed equal advantages, are put upon skates for the first time in their lives, the lady always manages to skate independently sooner than the gentleman.

The difference between the first two-wheeled (inline) skates and subsequent ‘quad’ skates of the 1860s is comparable to that of the Ordinary (later called ‘penny farthing’) and the safety bicycle introduced in 1886.

The early two-wheeled skates were hard to turn or stop. What would become known as ‘quad’ skates were invented in 1863: these provided much greater control over the skates, so greatly popularised the hobby.

Just as cycling was lampooned when the first velocipedes appeared on the streets in 1869, George du Maurier’s wry observations of (inline) skating appeared in the 17th February 1863 edition of Punch magazine (below). 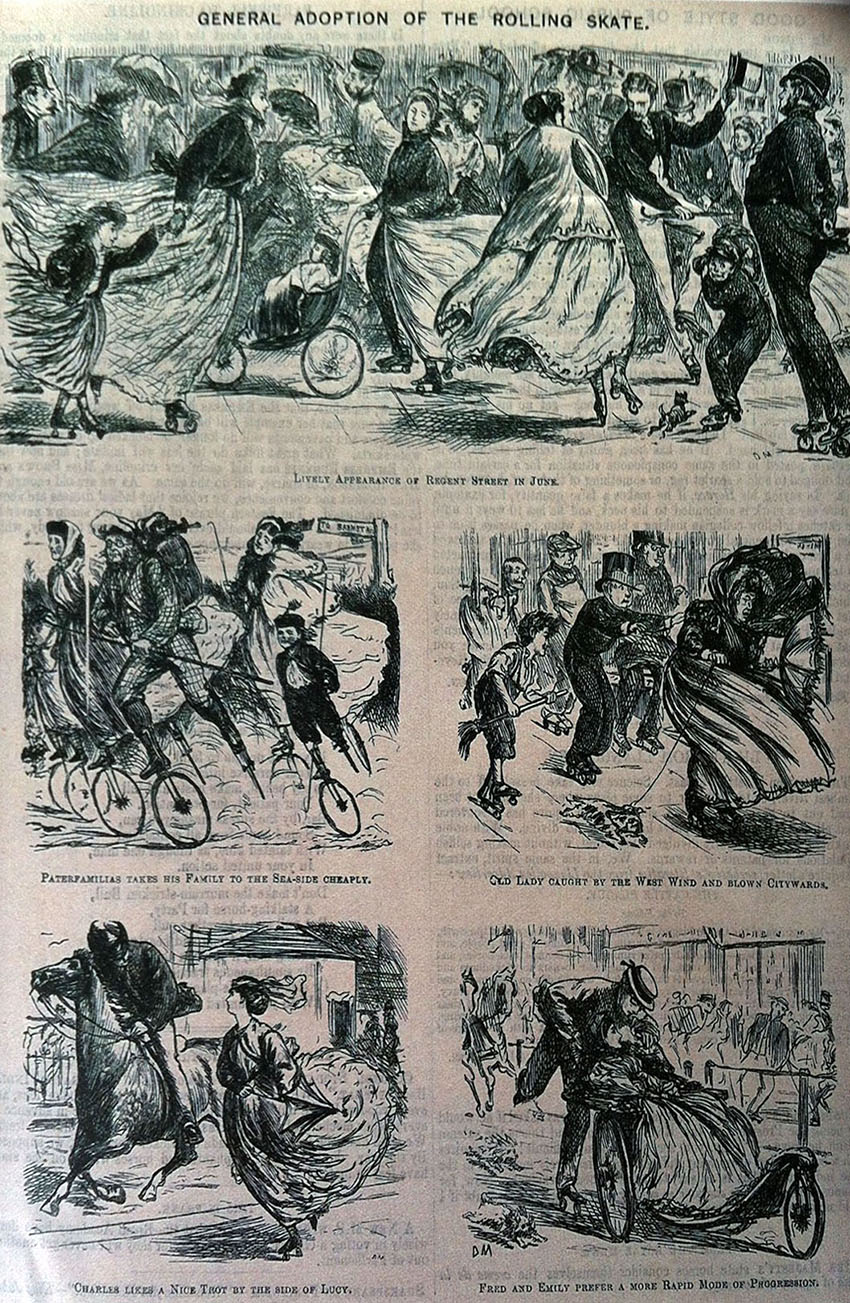 Although quad skates made inline skates obsolete by the mid-1860s, inline/road skates such as the Ritter became popular again in the 1890s. While ice skating and quad roller skating were favoured by women, road skating subsequently became a predominantly male sport. Serious ice or fen skaters and racing cyclists liked to use Ritter Road Skates to keep up practise out of season. 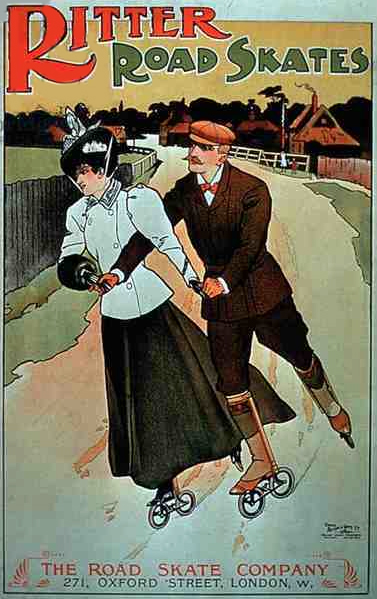 Wheelbase of each skate: 8″ 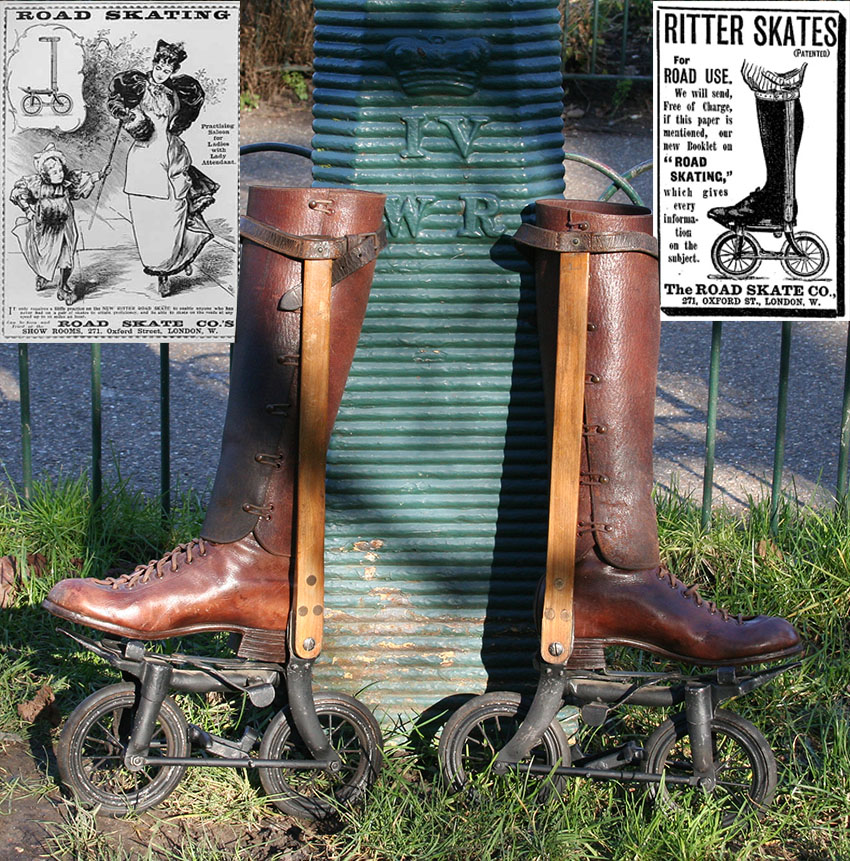 Every year throughout the late 19th century and early years of the 20th century, more amazing ‘novelties’ on wheels made their debut. Engineering companies throughout the industrial world were cashing in on a remarkable consumer boom in new forms of personal transportation, and professional and amateur inventors everywhere were cobbling together primitive ‘vehicles’ of all sorts to satisfy public demand. More often a patent made the inventor more money than its production.

Bicycles were the latest fashion in the mid-1890s. So you can almost imagine Mr Ritter waking up one morning with his ‘eureka’ moment …a pair of roller skates with the skater standing on top of a pair of miniature bicycles! It’s a credit to the foresight of the inventor and the engineering company that produced these skates that a few still survive twelve decades later in fully working order.

Each Ritter skate is stamped either ‘left’ or ‘right.’ It also shows the size. This matched pair is a size 9 1/2. Unusually, they have smaller diameter wheels – 5″. The normal wheel diameter is 6″, so I assume these to be ladies’ Ritter Road Skates.

The wheelbase of these ladies skates is 8″, whereas the larger gents’ Ritter skates are 9″.

Every skate is hand-built so I assume that a customer could order a bespoke fitting.

Each Ritter skate has a brake with an eyelet at the top. String is attached to the eyelet and the other end could be held in the skater’s hand; a handle could also be attached, to put into the skater’s pocket. This novel feature might have been for novice skaters.

The well known Bartleet’s Bicycle Book, published in 1931, shows a pair of Ritter skates with the top of the string tucked through the leather strap at the top of the wooden leg support. The text accompanying the illustration (below) states: ...The skates weigh 40 lbs each and each skate is secured to the boot by clips on the principle of the ‘Acme’ ice skate. The wheels run on ball bearings and, as you can see below, feature a braking system reminiscent of that of the velocipede. The brake is applied to the rear wheel by pulling the cord which follows the wooden strut up to within a few inches of the skater’s knee.

However, this gives the impression that the skater would bend down and pull the string to activate the brake, which is wrong… and rather dangerous if you needed to brake while skating! In fact the string did not end at the knee, but extended to the skater’s hand. (Some people think everything in Bartleet’s book is 100% true, but Bartleet’s assumptions were sometimes wrong).

Ritter skates are well constructed. This pair has recently been serviced, and is in good original condition, except for the brake apparatus which has been repaired (though you’re unlikely to notice). On the Right skate, the buckle is missing on its leather strap. If required, I can provide replacement leather straps which look very similar, but I preferred to leave the originals in place. On the Left skate, a thin metal capping has come loose at the end of the wooden strut where it attaches to the skate; in one of the photos, I’ve bent it open so you can see this; it simply needs gluing back into place.

A bar on the side of a Ritter skate opens up to clamp its shoe in place, though skates of this era are made for people with narrow feet. The Victorian ladies boots fit into the clamps, but modern shoes and boots with wider soles would not. However, if you strap the wooden supports around your leg, it’s not necessary to clamp the boots for casual skating.

These Ritter skates are sturdy and fully functional. 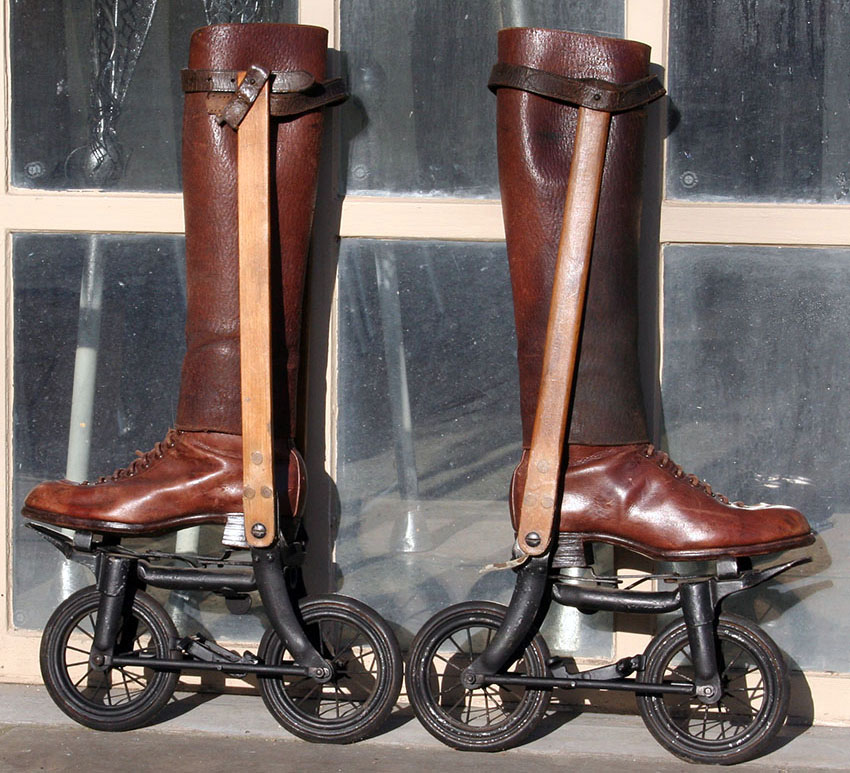 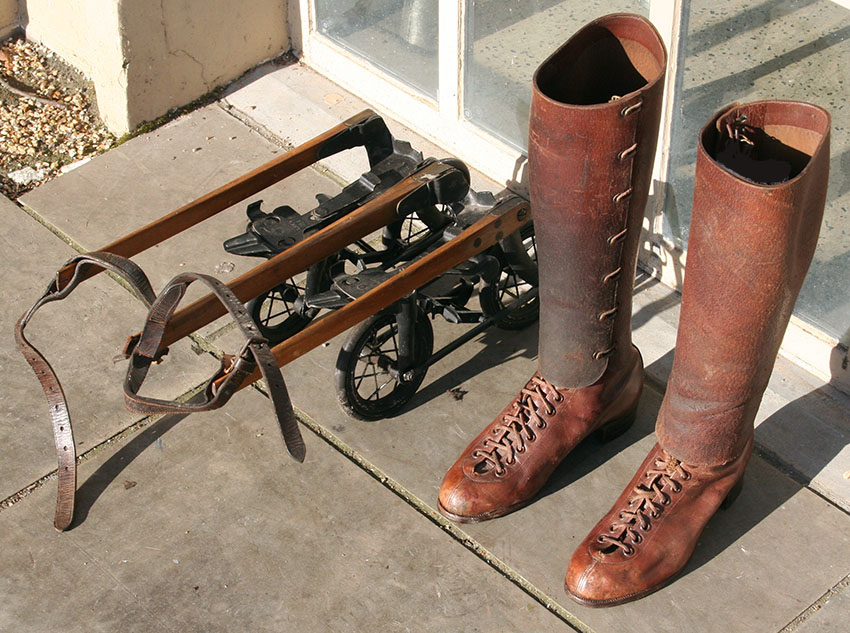 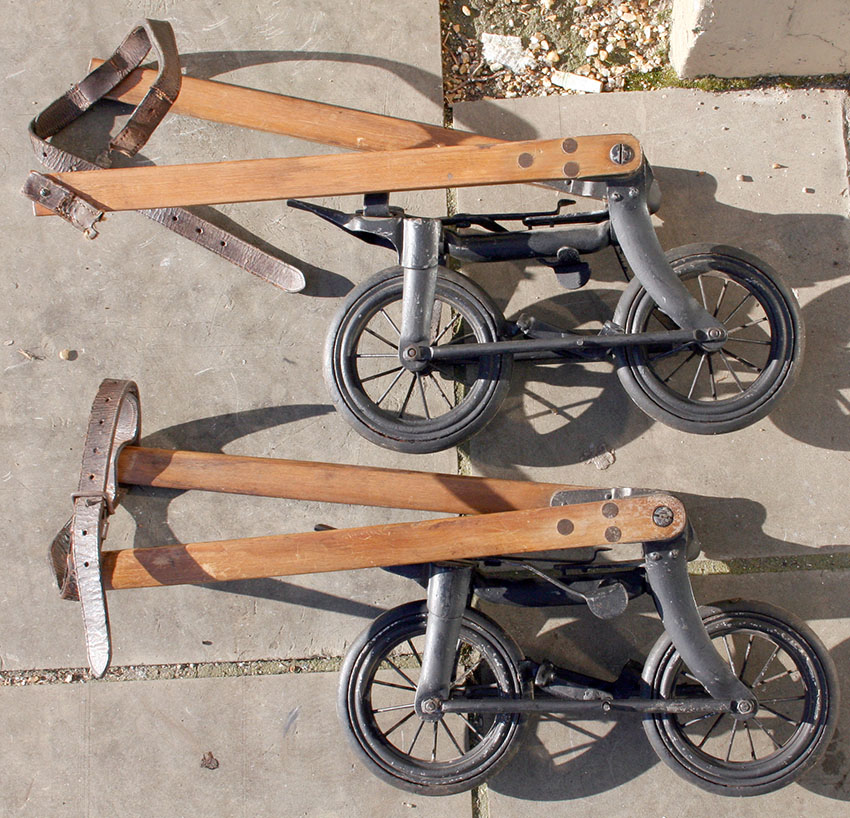 The skates were marketed by The Road Skate Co of Oxford Street, London. The company also issued a booklet – free of charge – on ‘Road Skating’ which purports to give ‘every information on the subject.’ The design was unique to this style of skate. One of the company’s adverts proclaims:

Unlike other skates, the Ritter Road Skate has a hinged splint on either side of the leg, which in conjunction with the brake, entirely prevents any twisting or undue strain on the ankle joint. People with the weakest ankle may therefore use this skate, and derive great benefit from the exercise. It only requires a little practice on the new Ritter Road Skate to enable anyone who has never had on a pair of skates to attain proficiency, and be able to skate on the roads at any speed up to 16 miles an hour.

‘Road Skates’ were the ancestors of roller skates. They were invented by Mr. Ritter, a Swiss, who was foreman at the original Napier Works at Vine Street, Lambeth, London, where (later) the first Napier motor-cars were made. The Ritter skates were popular around 1897/ 1898, and several well-known cyclists, notably M. S. Napier, Walter Munn, and A. Hoffman, formed a club and skated on the road every week-end. When last heard of (1929) Mr. Ritter was in business as an engineer in Paris under the name of Ritter and Smith, 35 Rue Batignolles. (These premises are now occupied by a hair salon ‘Caroline Coiffure’).

H.W Bartleet says of the skates in his own collection:

No. 50. Pair of ‘Ritter’ road skates. Though strictly speaking, not qualifying for inclusion in a collection of cycles, these instruments of travel are very closely associated with cycling. The men who made them and the enthusiasts who used them were all cyclists, and, indeed, each skate is in reality a tiny bicycle.

These skates were invented by Mr. Ritter, a Swiss, who was foreman at the original Napier Works at Vine Street, Lambeth, London, where (later) the first Napier motor-cars were made. The Ritter skates were popular about 1898, and several well-known cyclists, notably Montague Napier, Walter Munn and A. Hoffman, formed a club and skated on the road every week-end.

When last heard of (1929) Mr. Ritter was in business as an engineer in Paris under the name of Ritter and Smith, 35 Rue Batignolles. The skates weigh 81 lbs. the pair. They were presented to the Collection by C. G. Bowtle, the well-known racing cyclist. 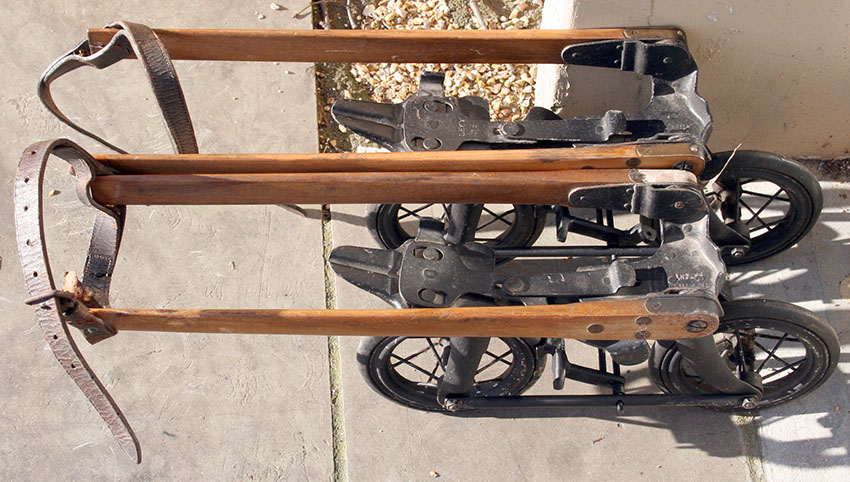 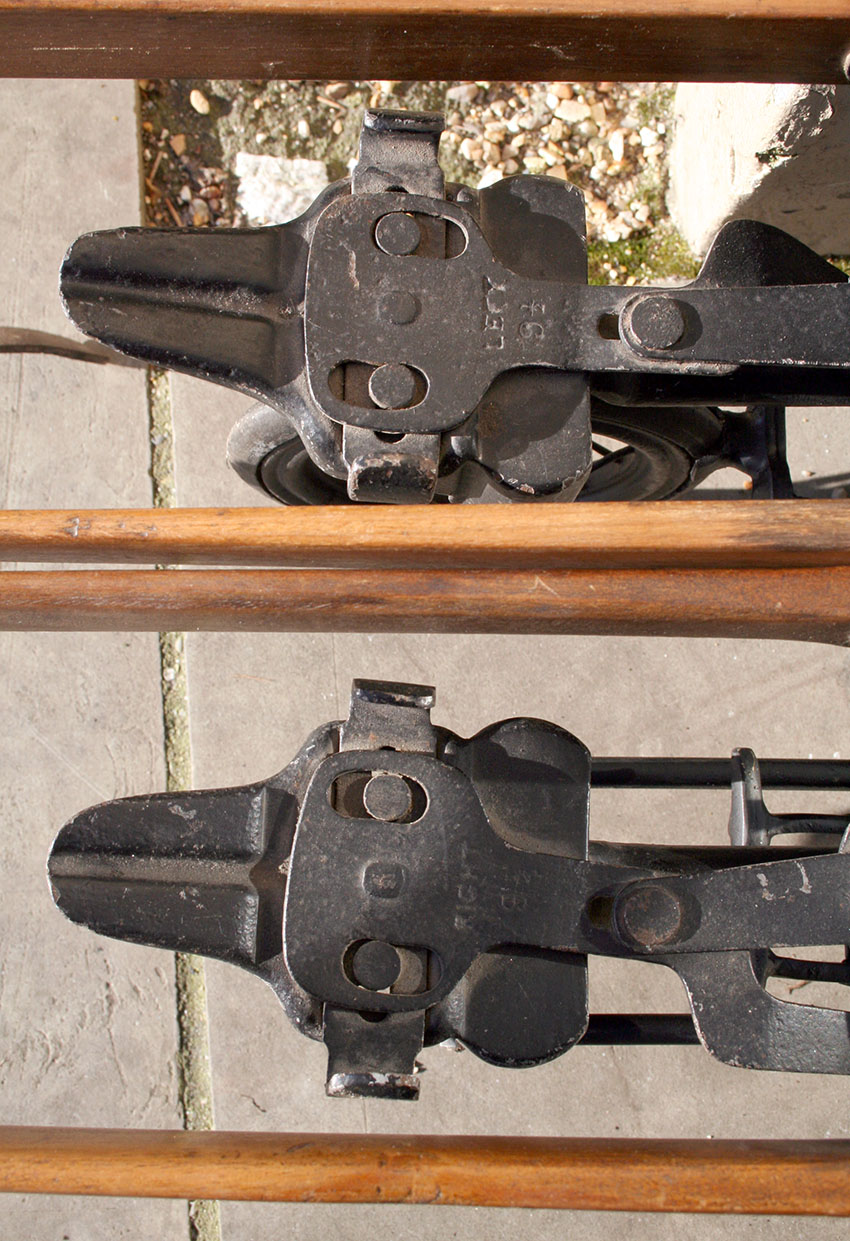 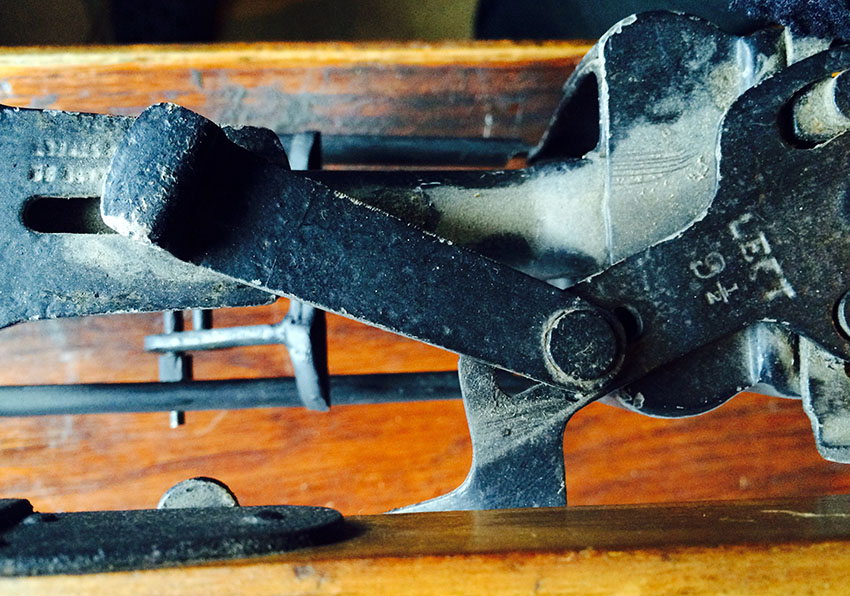 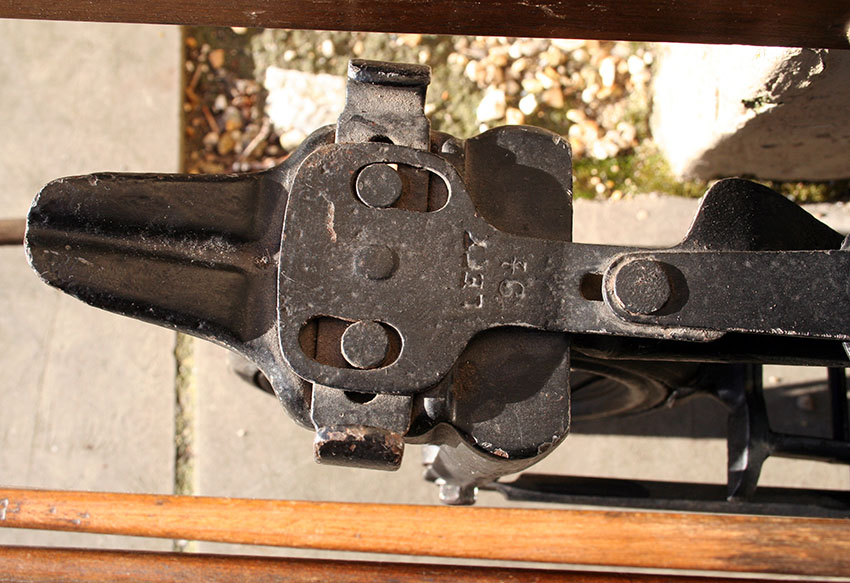 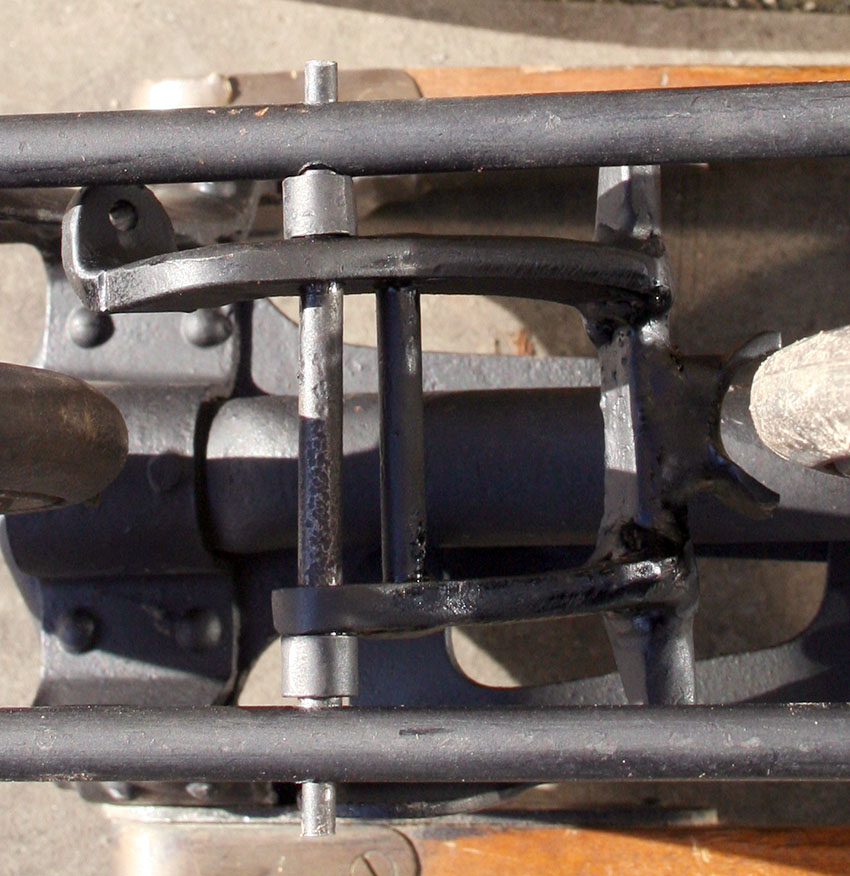 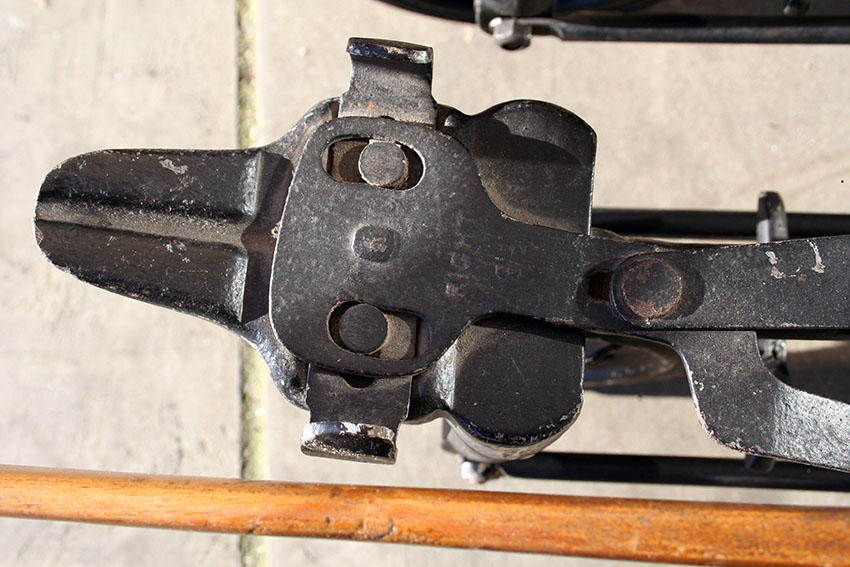 Below, on the right, you can see where the thin metal capping over the hinged strut is bent back; it requires gluing back into place. The inscription reads ‘The Ritter Patent.’ 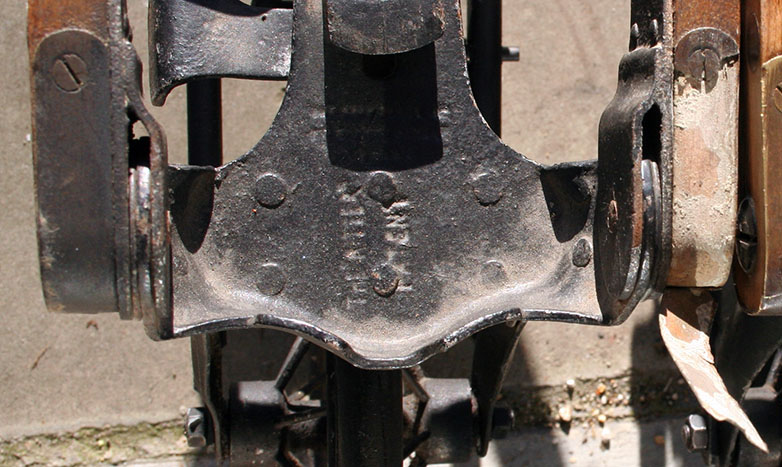 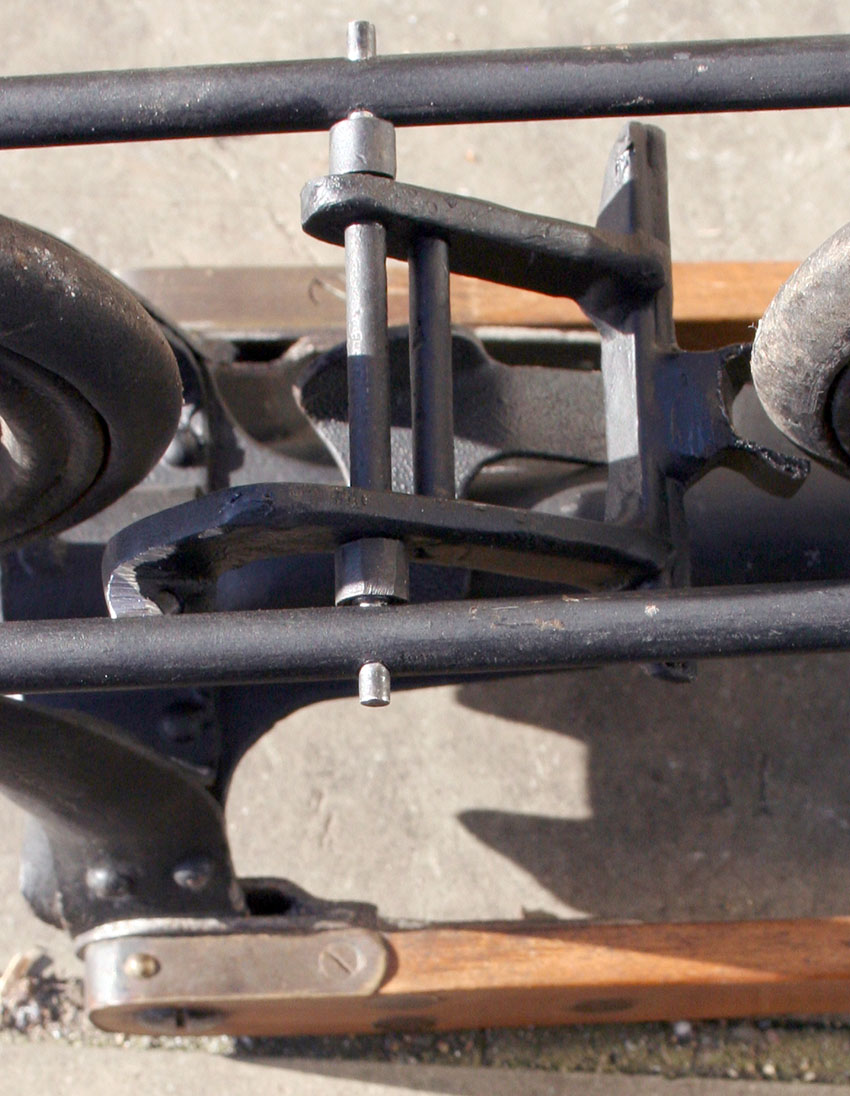 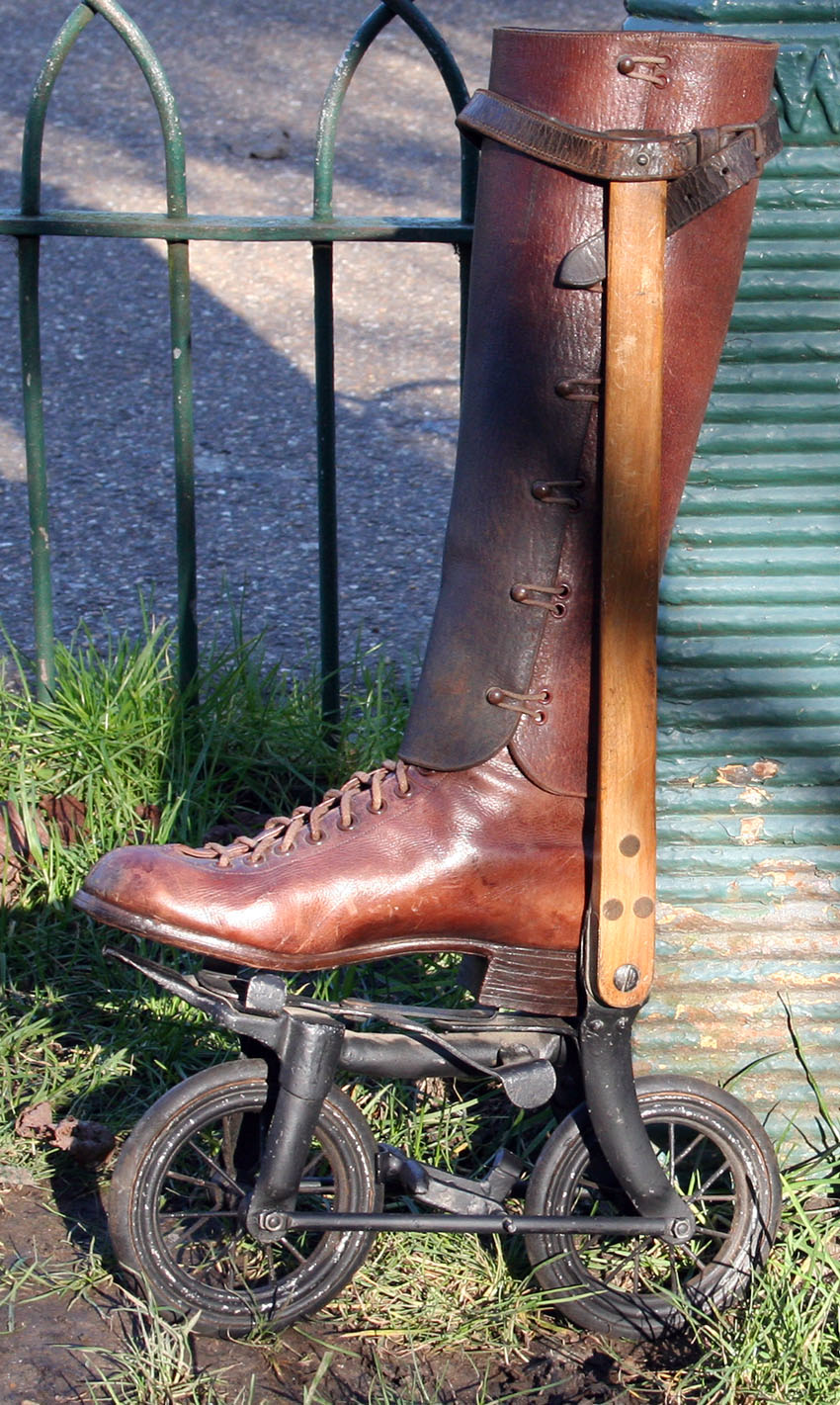 Ritter Road Skates were also marketed around the world, as these articles from New Zealand newspapers illustrate. 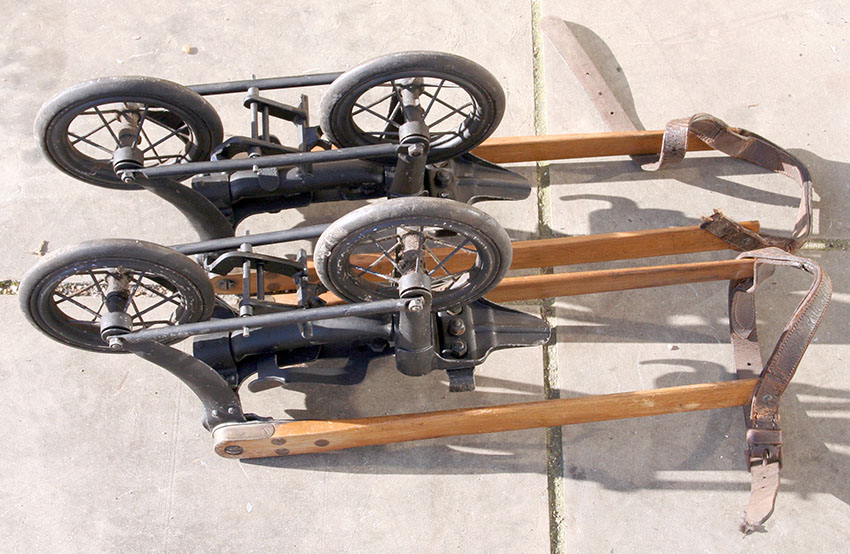 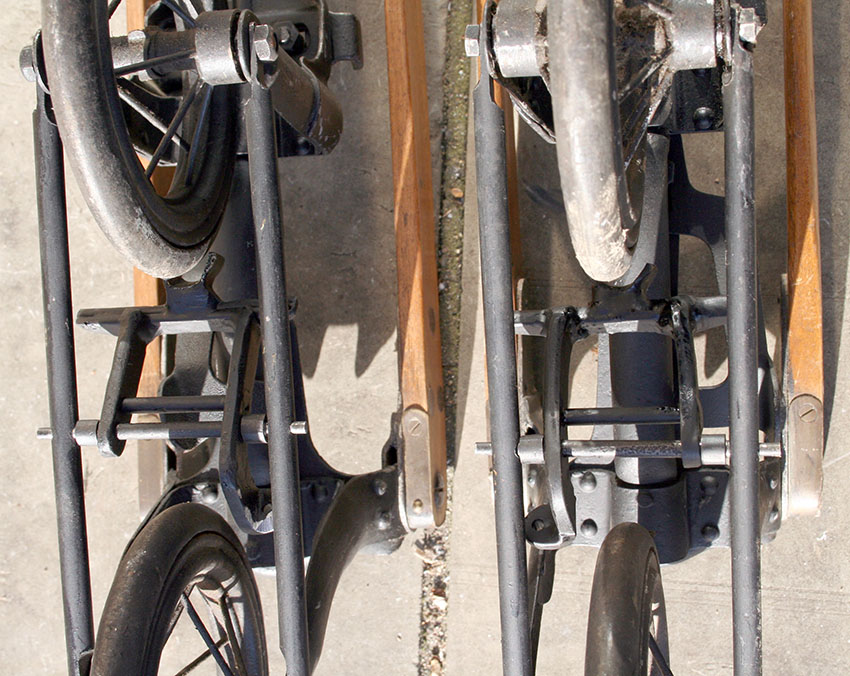 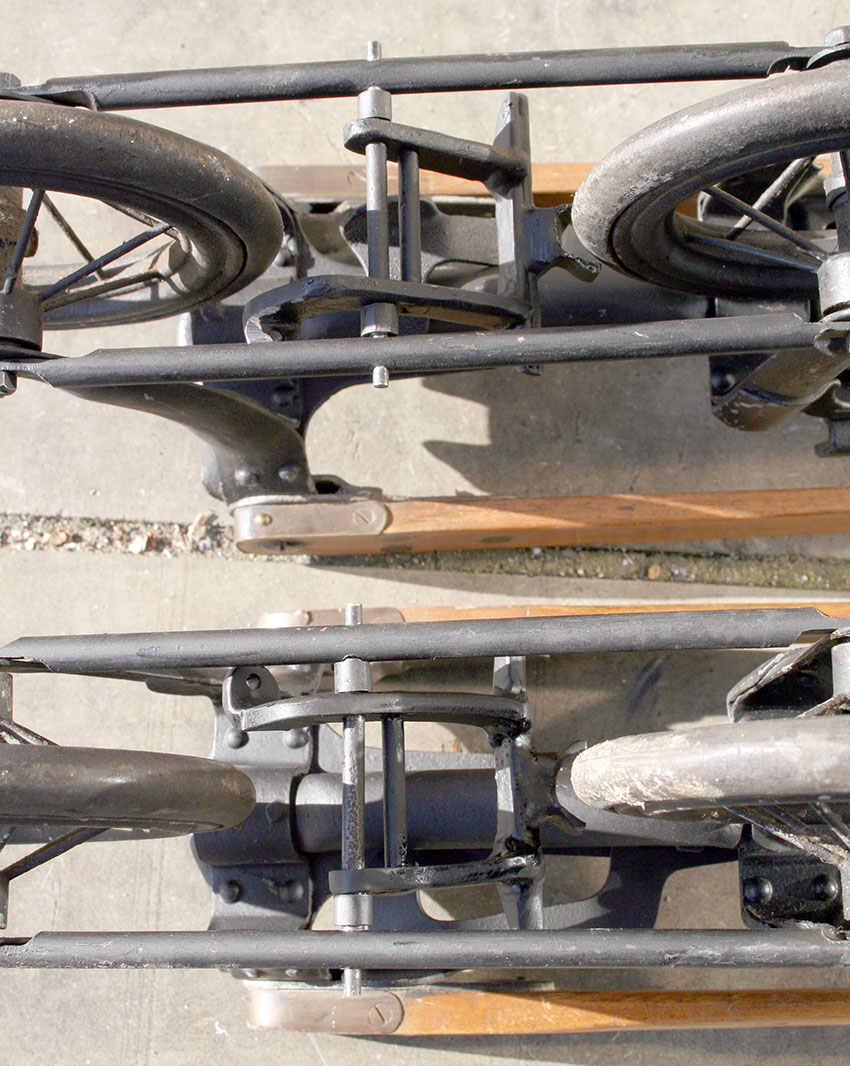 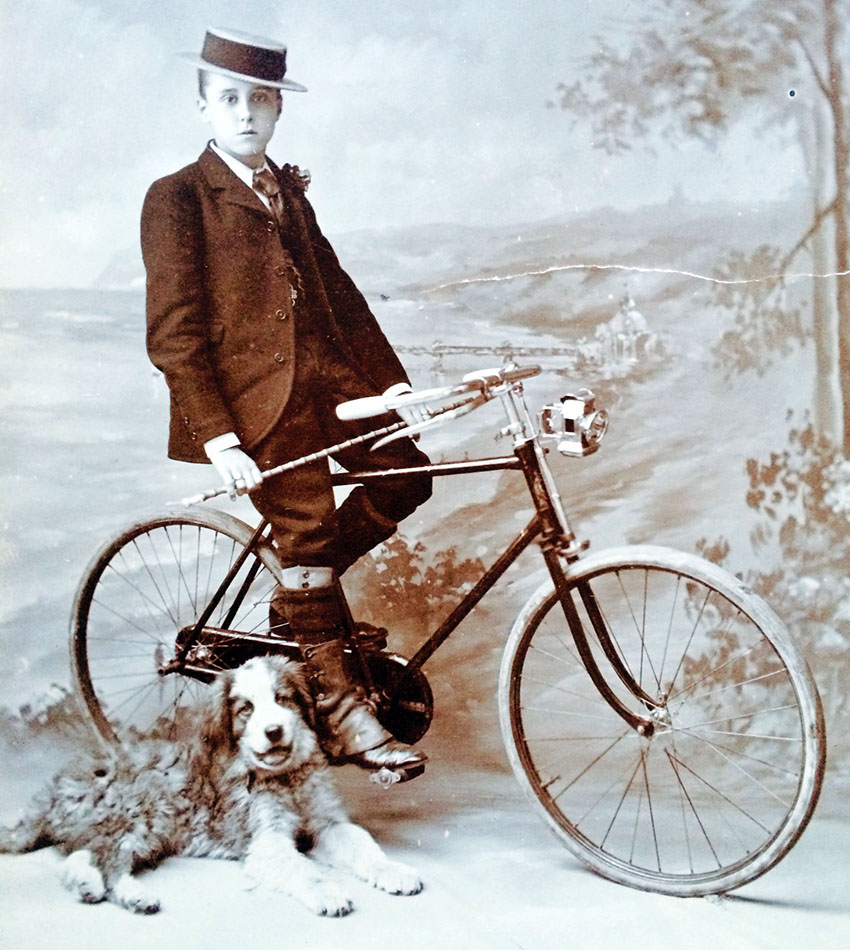 These photos were taken in Pavilion Gardens, a typical place to use your Ritter skates in Victorian times. The inscription on the lamp post (above) reads ‘IV WR.’ This relates to King William IV, who reigned for seven years, before Queen Victoria.

When George IV died on 26 June 1830 without surviving legitimate issue, the Duke of Clarence succeeded him as William IV. Aged 64, he was the oldest person ever to assume the British throne. Unlike his extravagant brother, William was unassuming, discouraging pomp and ceremony. In contrast to George IV, who tended to spend most of his time in Windsor Castel, William was known, especially early in his reign, to walk, unaccompanied, through London or Brighton. Until the Reform Crisis eroded his standing, he was very popular among the people, who saw him as more approachable and down-to-earth than his brother.

The King did his best to endear himself to the people. Charlotte Williams- Wynn wrote shortly after his accession: “Hitherto the King has been indefatigable in his efforts to make himself popular, and do good natured and amiable things in every possible instance.” Emily Eden noted: “He is an immense improvement on the last unforgiving animal, who died growling sulkily in his den at Windsor. This man at least wishes to make everybody happy, and everything he has done has been benevolent.”

William dismissed his brother’s French chefs and German band, replacing them with English ones to public approval. He gave much of George IV’s painting collection to the nation, and halved the royal stud. George IV had begun an extensive (and expensive) renovation of Buckingham Palace; his brother refused to reside there, and twice tried to give the palace away, once to the Army as a barracks, and once to Parliament after the Houses of Parliament burned down in 1834. His informality could be startling: When in residence at the Royal Pavilion in Brighton, King William used to send to the hotels for a list of their guests and invite anyone whom he knew to dinner, urging guests not to “bother about clothes. The Queen does nothing but embroider flowers after dinner.”

During his reign great reforms were enacted by Parliament including the Factory Act, preventing child labour, the Abolition Act, emancipating slaves in the colonies, and the Poor Law, standardising provision for the destitute. He attracted criticism from reformers, who felt that reform did not go far enough, and from reactionaries, who felt that reform went too far. The modern interpretation is that he failed to satisfy either political extreme by trying to find compromise between two bitterly opposed factions, but in the process proved himself more capable as a constitutional monarch than many had supposed.

Though he had a reputation for tactlessness and buffoonery, William could be shrewd and diplomatic. He foresaw that the potential construction of a canal at Suez would make good relations with Egypt vital to Britain. Later in his reign, he flattered the American ambassador at a dinner by announcing that he regretted not being “born a free, independent American, so much did he respect that nation, which had given birth to George Washington, the greatest man that ever lived”. By exercising his personal charm, William assisted in the repair of Anglo-American relations, which had been so deeply damaged during the reign of his father. 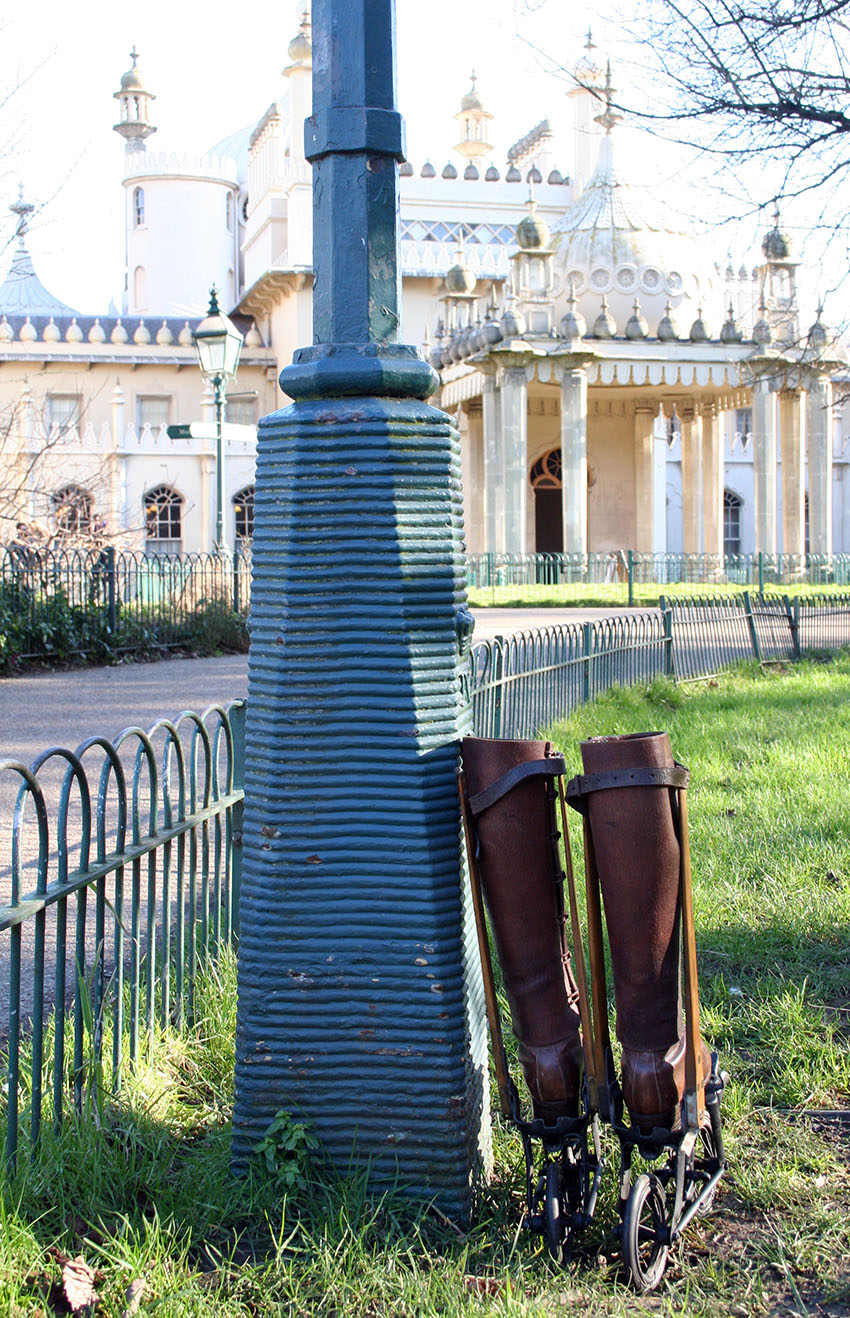 * Ice Skating: A Pleasure for All, by Victoria Rumble