Although the French tyre market was dominated by the large manufacturers, small specialist tyre companies also existed in the early years, eventually taken over by the larger concerns as they became multinationals.

Baudou of Bordeaux made the popular ‘La Sirene’ tyre and their famous poster featuring the mermaid ‘siren’ has assured that the company’s name is still remembered a century later, even though most remaining examples of Baudou cushion tyres have become extinct.

This lithograph poster, printed by Vercasson around 1920, was designed by Leonetto Cappiello – considered the ‘father of modern advertising’ because of his innovations in poster design. Cappiello started designing posters for Vercasson in 1900 and created several hundred posters over the following decades in a style that revolutionised the art of poster design. Cappiello redesigned the ‘fin-de-siècle’ pictures into images more relevant to the faster pace of the 20th century.

‘Cushion tyres’ are not inflatable: they are made of thick rubber with internal strengthening ribs. As you can see in the illsutration, Baudou cushion tyres have an air tube in the centre; nevertheless, they are heavy tyres. They must be glued to the wheel rim.

Cushion tyres are interesting from a historical perspective because this was one of the earliest tyre styles, becoming a popular – though expensive – option when they were first introduced by cycle manufacturers around the world in the late 1880s. As Dunlop perfected his pneumatic tyre design soon after, cushion tyres became unnecesary (although the American cycle industry used similar ‘tubeless’ tyres until 1932 in order to avoid paying patent royalties for pneumatic tyres).

This beautiful French racing bicycle was found by my friend Ray in 1999, and lovingly restored by him a few years later. He had it painted in French talbot blue, and re-nickeled throughout.

It made its debut when he rode it on the Herne Hill track in 2002.

It is fixed wheel, without brakes, in the style of the day. The chainwheel is a Brillant (there’s a link to the Brillant bicycle at the bottomof the page). The machine is geared to 80″.

The 700 x 35C tyre size is the equivaalent of 28 x 1 5/8 x 1 3/8″ (37-622) which is a common size for early French bicycles; modern versions are available in France (specially made and imported from Vietnam). To see a tyre comparison chart for obscure tyres PLEASE CLICK HERE

Situated in the town of Toucy, 160 metres south of Paris, Bernasse was one of thousands of small manufacturers who set up to cater for local bicycle sales at the end of the cycle trade’s first ‘boom years’ of the 1890s.

The 1900 Paris Exposition (debut of the Eiffel Tower) inspired many small regional cycle companies to create a higher profile: it acted as a forum for manufacturers to meet and exchange ideas, as well as create alliances and agencies to give them a larger share of the market.

The owner Max Bernasse subsequently made a number of other lines, including three-wheelers, children’s pedal cars (under license from Eureka) and, later, motorcycles. The company was connected with the Hygina brand name. 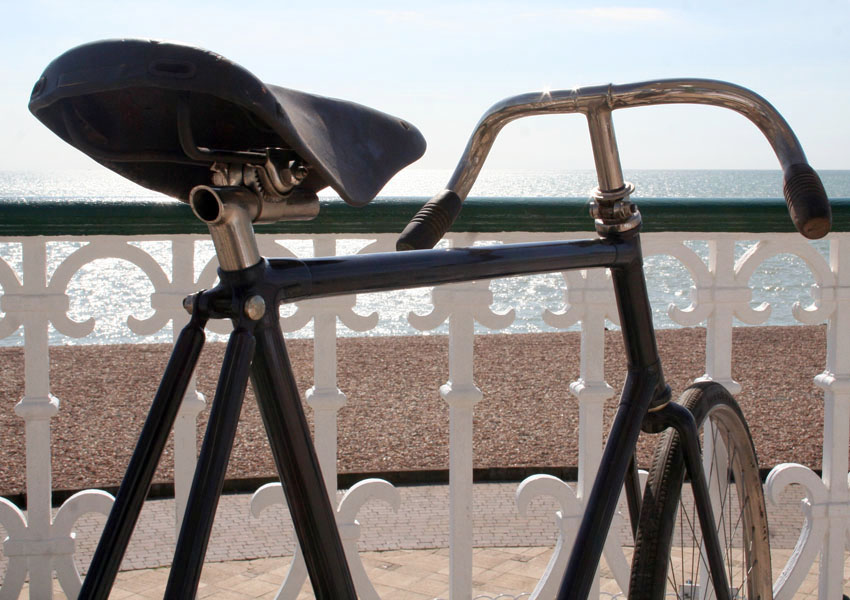 In 1903, for the first time Cappiello dares to paint a red horse on the walls. The horse is moreover ridden by an Amazon in green. The shock of the colors and the fury of the horse strike the public. Everyone starts talking about and buying Klaus chocolate. The horse and its Amazon will stay on the chocolate bars until 2004.

This Bernasse uses a Brillant chainwheel.

Cycles Brillant was a rival manufacturer, whose most famous poster (above) was designed by Henri Gray.