RUSHBROOKE & Co: Frederick William Rushbrooke started the company as a hardware merchant in 1892 in Charlotte Street, Birmingham. A move was made to 30 Moor Street in 1894 and about this time Frederick Dale Tippets was engaged as general manager. Rushbrooke was a keen cyclist and the company took a stand at the Stanley Cycle Show in 1897. It seems likely that at this stage the company probably bought-in cycles and cycle fittings although it is known that a ‘Tom Thumb’ juvenile tricycle was made for the company. In 1900 a Mr George Smith was engaged who had previously been with the Enfield Manufacturing Co., the Albert Eadie Chain Co. and the New Comet Cycle Co.

in 1904, Rushbrooke opened a shop at 9 Halford Street, Leicester, to sell cycle fittings and parts to the trade, and published a catalogue. In 1907, after eight more shops had been added, Halford Cycle Co. Ltd was formed. 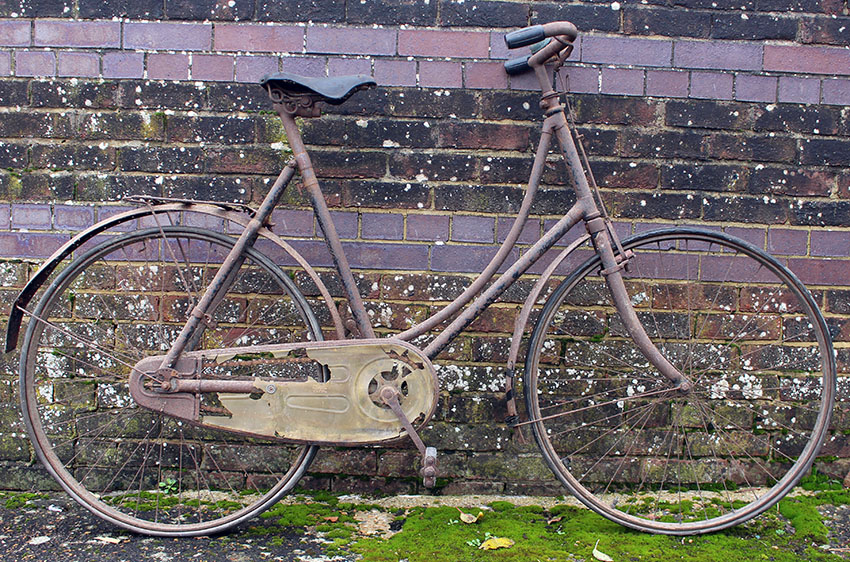 I bought this as a mystery machine 10 years ago and it was eventually identified for me by Andrew Millward in 2014 from the design of its fork crown, handlebar and front rim brake with thumb lever, illustrations of which appear in the 1902 Rushbrooke catalogue. There’s no illustration of the Rushbrooke Lady’s Cycle in the catalogue. The New Departure coaster brake fitted to this machine was introduced in 1903, so we’ve assumed its year from that. It’s unlikely to be any later as thumb lever brakes were quickly superseded by other styles adopted throughout the cycle trade, and every company was keen to show how ‘modern’ their brake designs were.

While various other parts fitted to the bike aren’t shown in the early Rushbrooke catalogue, the company does not appear to have updated them as they were still being advertised in the 1910 Halfords catalogue: coaster brake, rear carrier rack, grips, pedals. It’s not known if the bicycle was purchased direct from Rushbrooke & Co – from one of their shops, at a cycle show, or by mail order from their catalogue – or supplied through the cycle trade to a local cycle shop.

The only number I could find on the bike is a number 7. Andrew commented: “The number on your frame ‘7’ doesn’t suggest a serial number – could it be a model number I wonder? The lady’s frame is given as R77 in the catalogue – perhaps the number on the frame is a factory number. Pure speculation, but plausible.”

As Rushbrooke sold fittings as well as cycles, a pre-Halfords (1907) era machine is not easy to find or identify. This is the only example I’ve come across and appears to be the earliest known survivor.

The Rushbrooke is in lovely ‘as found’ condition, obviously stored in the dry since coming off the road many years ago. The tyres look like the originals. I’ve spun the pedals and back pedalled to see if the New Departure coaster brake operates, and it does. The paint has long since faded and there’s surface rust throughout, though the metal is sound everywhere, apart from the lower edge of the front mudguard, which is split (a common problem) but easy to fix. The celluloid chaincase is also cracked; these are very delicate and rarely last 116 years, the age of this bicycle. I usually remove them when they are broken, but I was inspired to keep this bicycle completely ‘as found’ due to its historic interest.

As you can see towards the bottom of the page, I also have a history file and Halfords ephemera to accompany this rare machine.