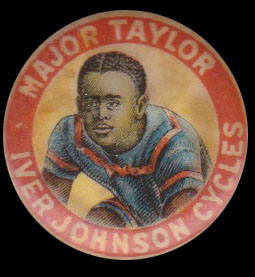 The history of bicycle improvement is very largely written around four feature points: 1. Truss frame. 2. Use of drop forgings. 3. Use of flush joints instead of outside joints for frame sections. 4. Dropped hanger. ALL FOUR of these engineering triumphs were Iver Johnson discoveries. Each has revolutionized the methods of bicycle designing and manufacturing.

…Take the Truss Bridge Frame, for instance, the most striking of all Iver Johnson innovations. Our engineers saw thousands of the single straight-bar type of bicycles buckle and collapse. So they borrowed the basic principle of truss bridge construction and adapted it to the bicycle. The steel bridge at Niagara and the new Hell Bridge over the East River in New York (below) are well-known examples of truss bridge building.

Iver Johnson not only made their name with their Truss Tube Frame patent, they also achieved many racing triumphs in the 1890s before the Truss Tube Frame was invented, with world champion Major Taylor their star rider. 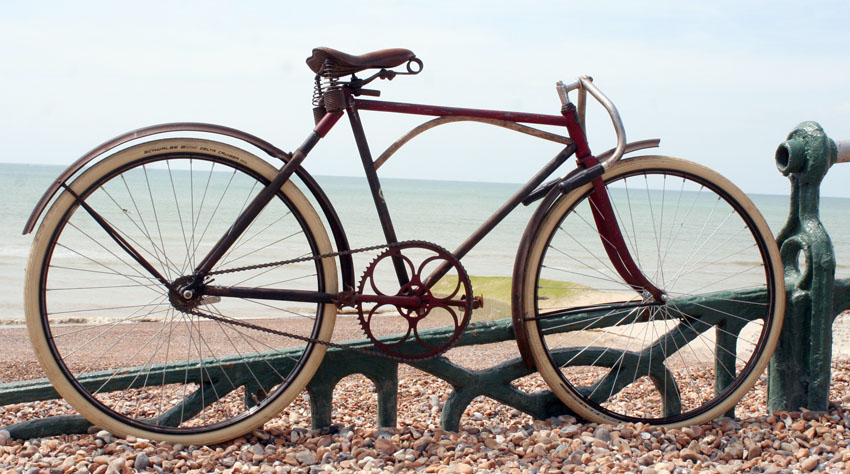 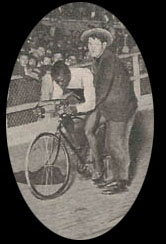 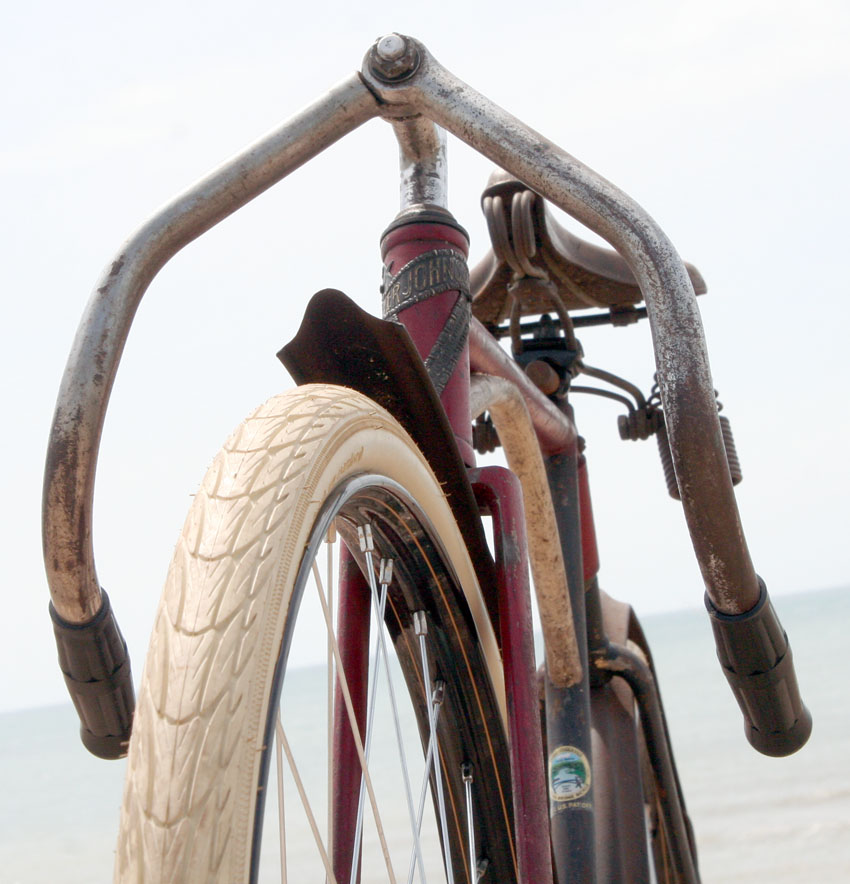 This machine came to me as a frame, forks and sprocket. I purchased the nickelled Torrington Adjustable handlebars in America. I’ve fitted a retro coaster wheel-set and other parts for now, to get it on the road. In due course, I’ll substitute some period wooden wheels. 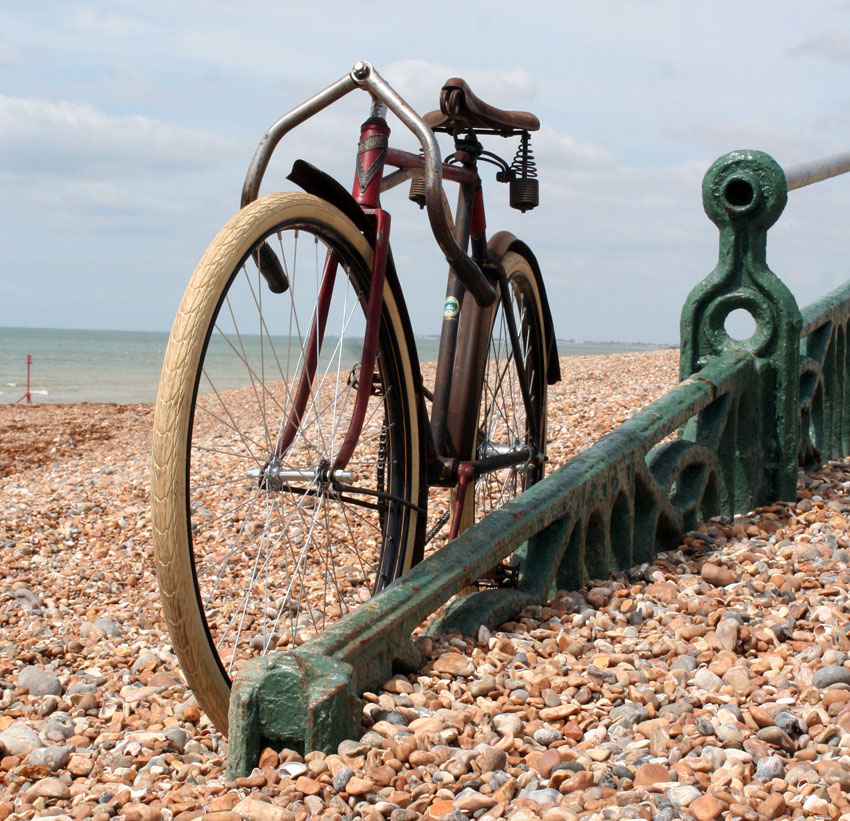 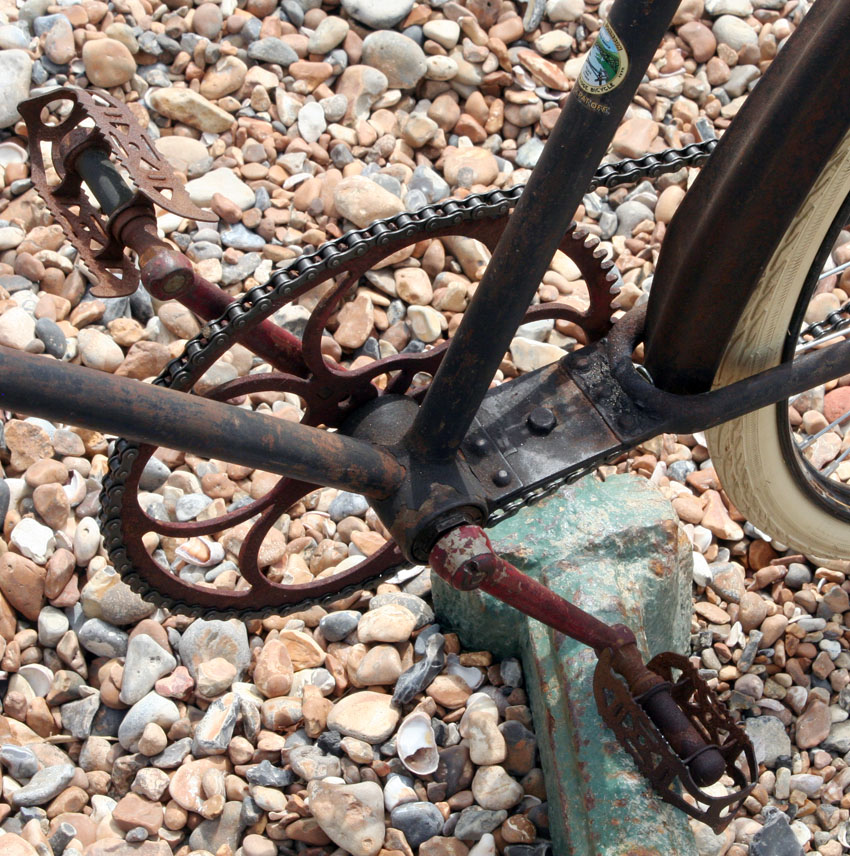 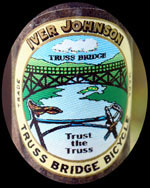 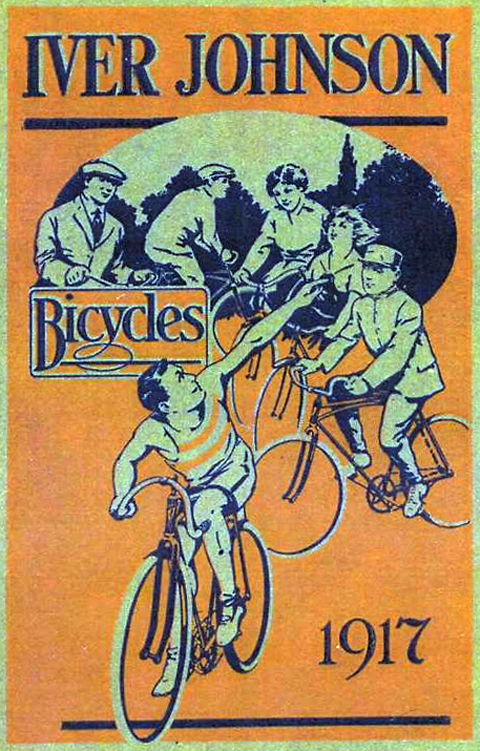 The differences between the Iver Johnson Cushion Frame Track Racer and Roadster, above and below, are the size and style of the chainwheel and the design of the the truss tube, whose arch joins the seat tube at a lower point, presumably to provide extra bracing. 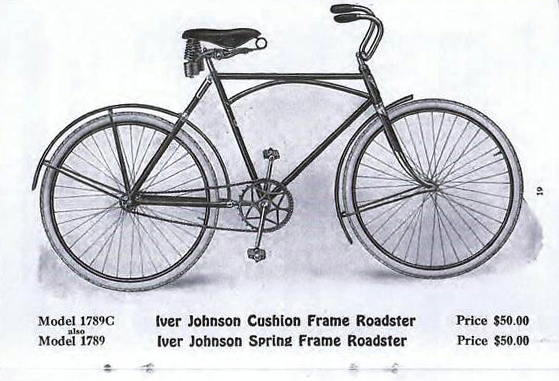 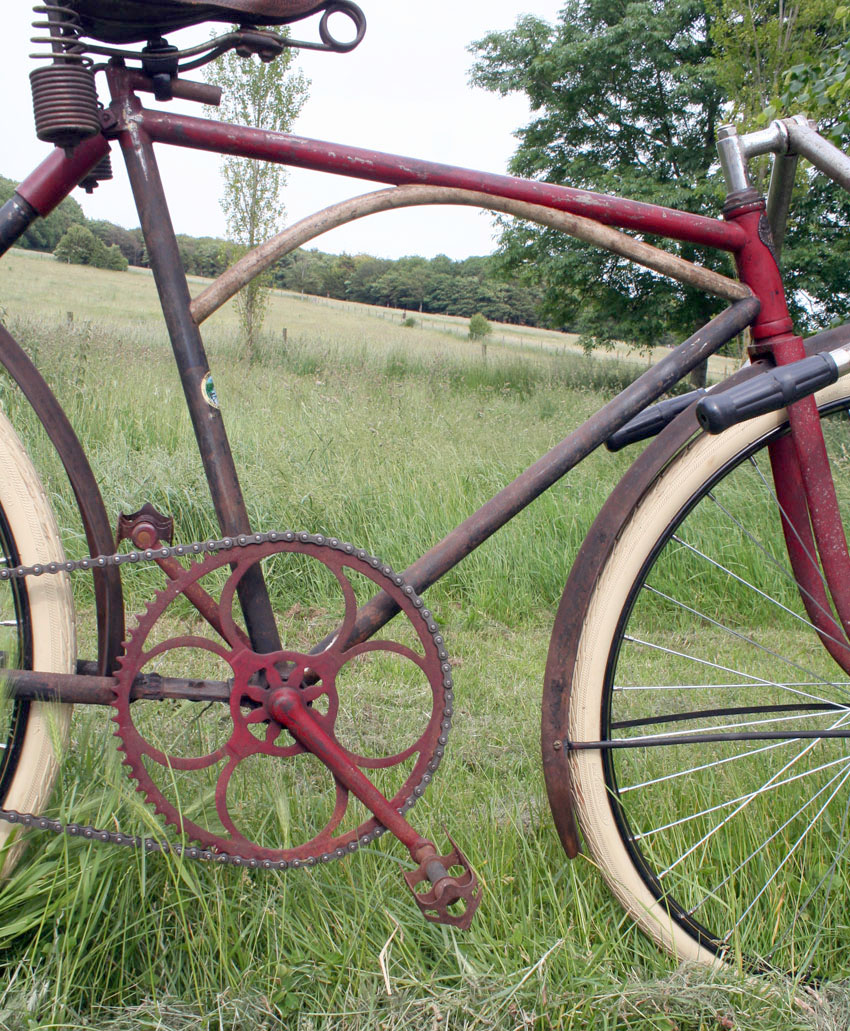 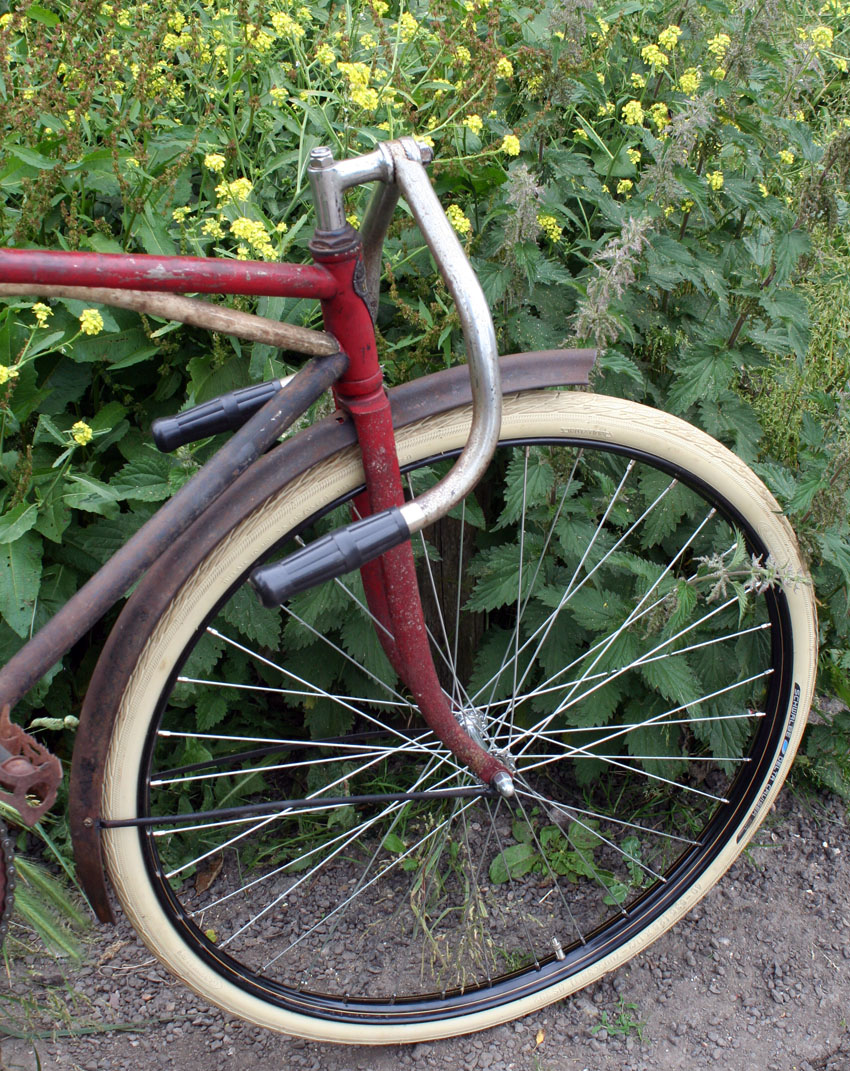 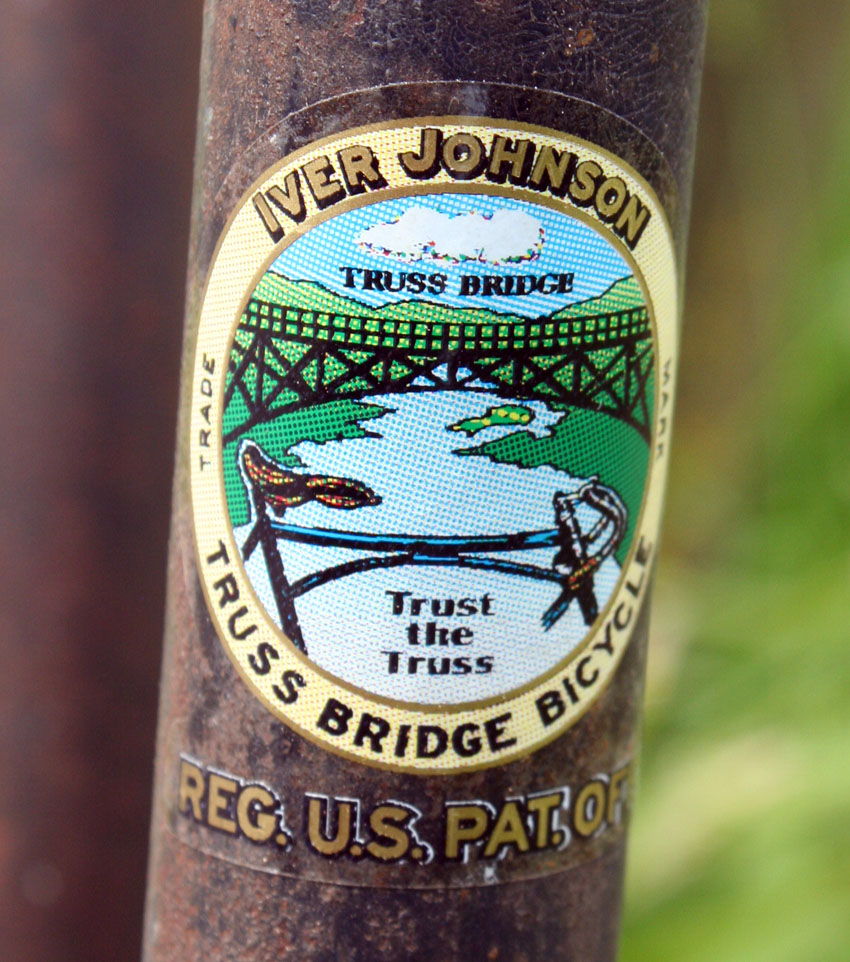 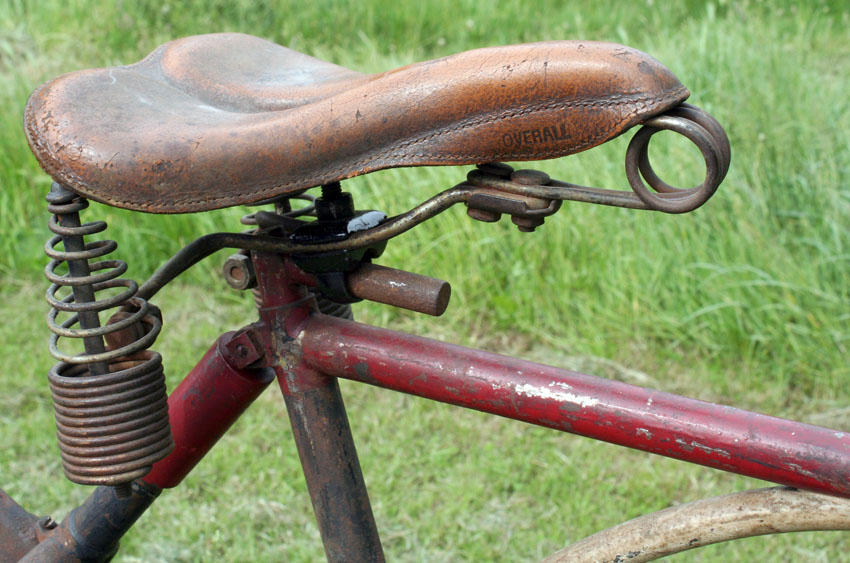 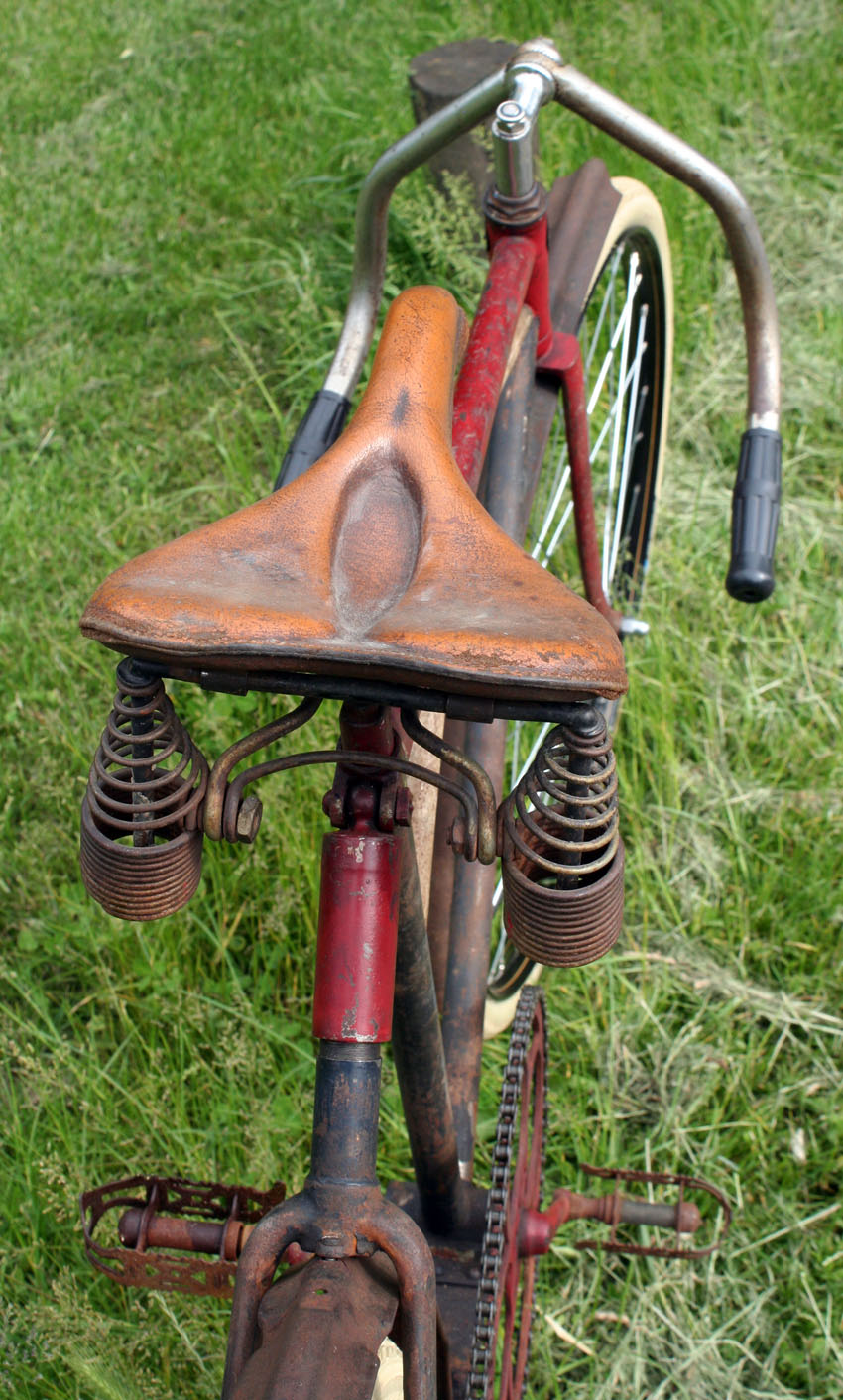 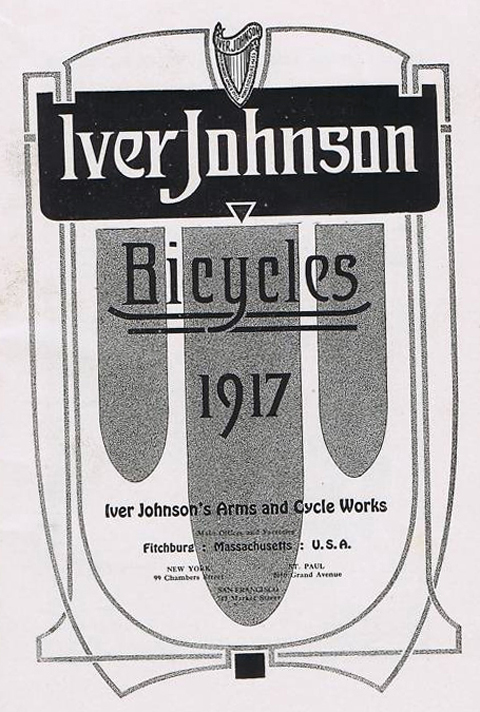 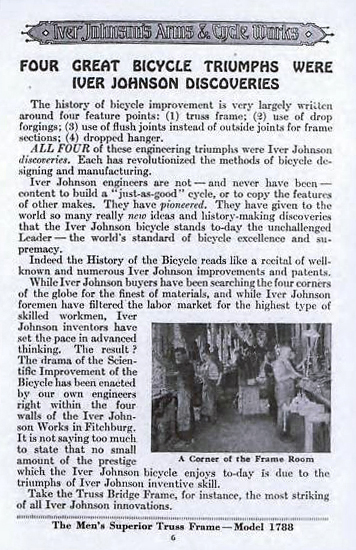 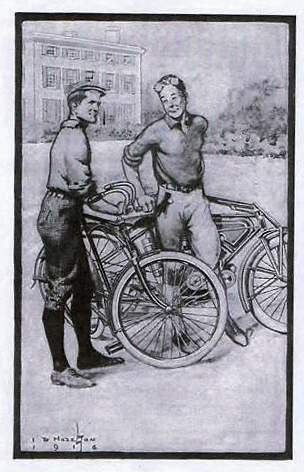 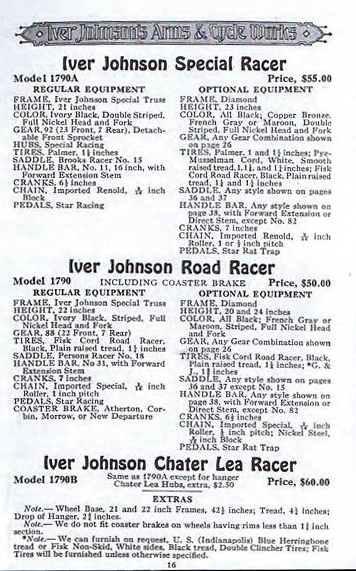 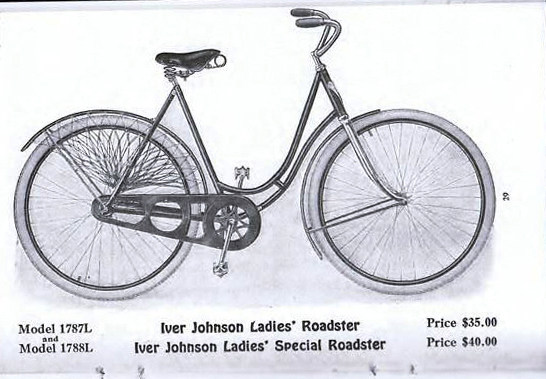 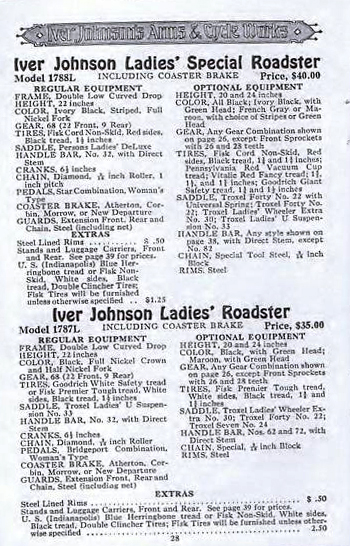 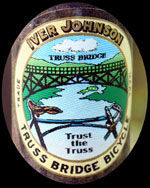 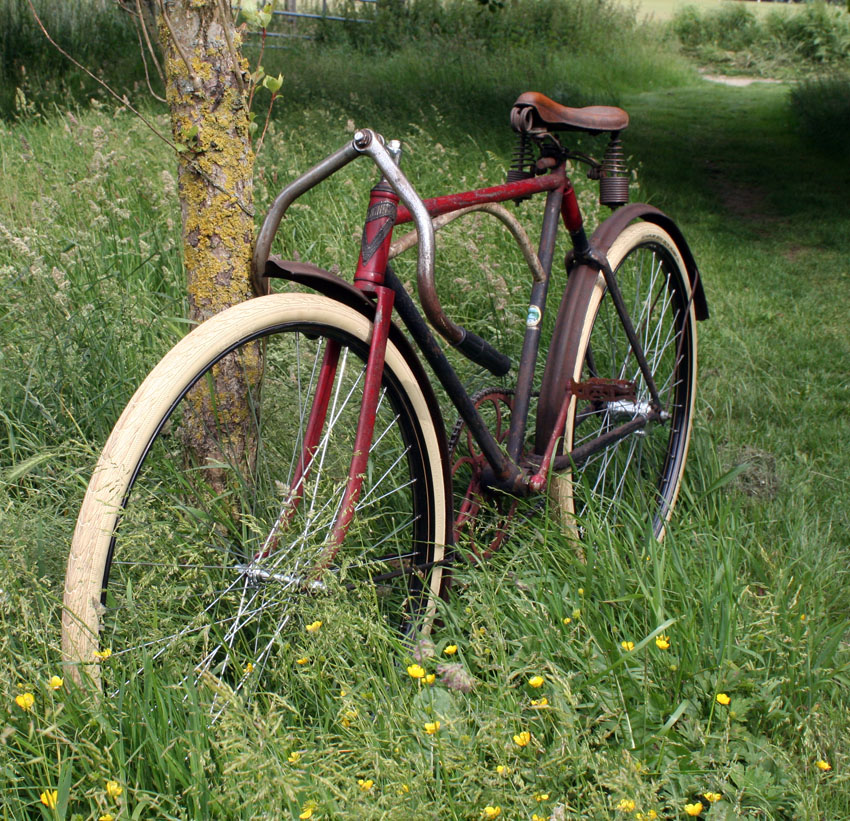 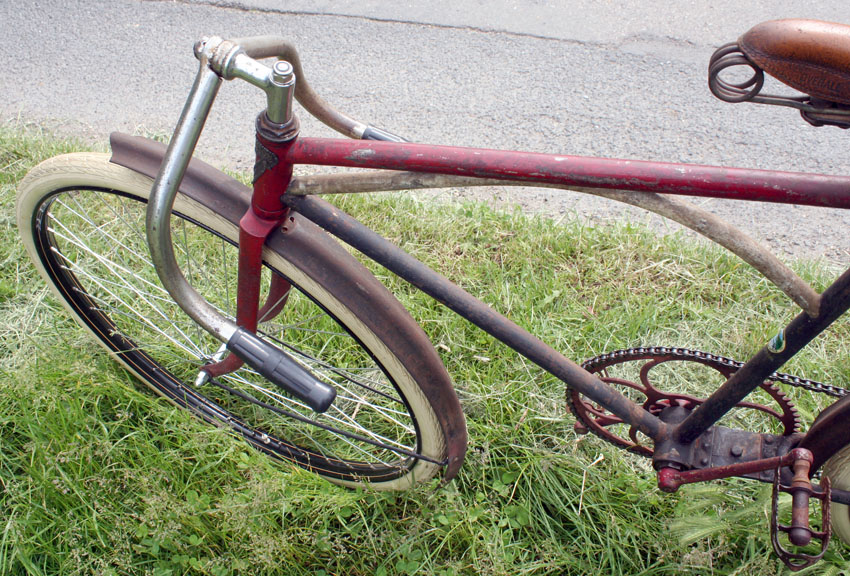 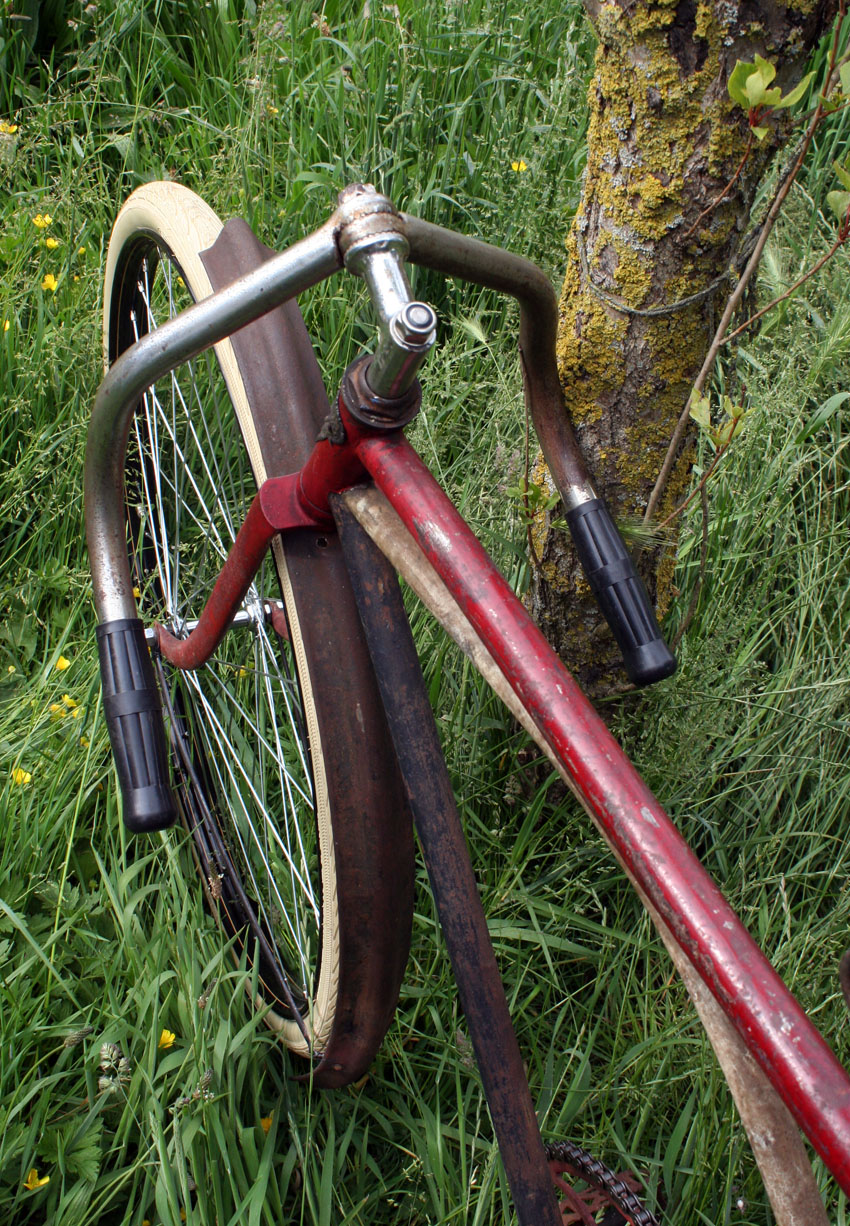 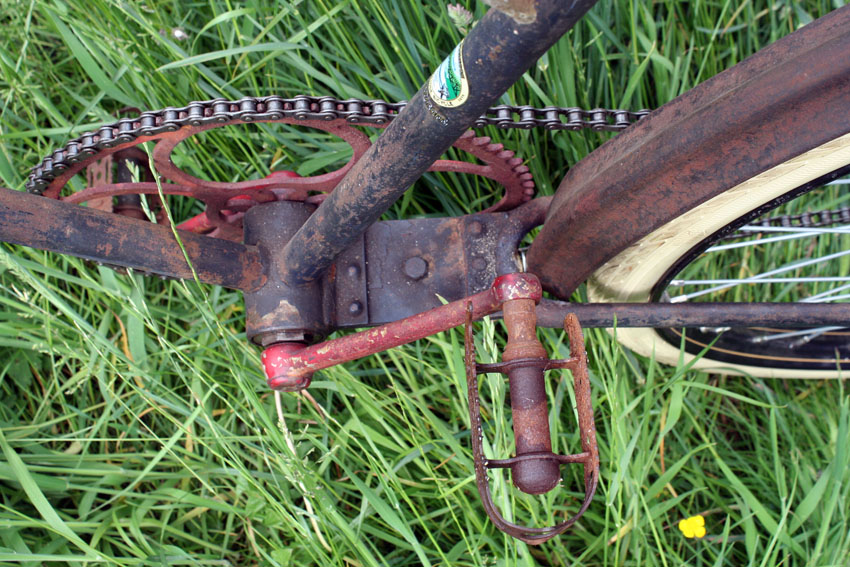 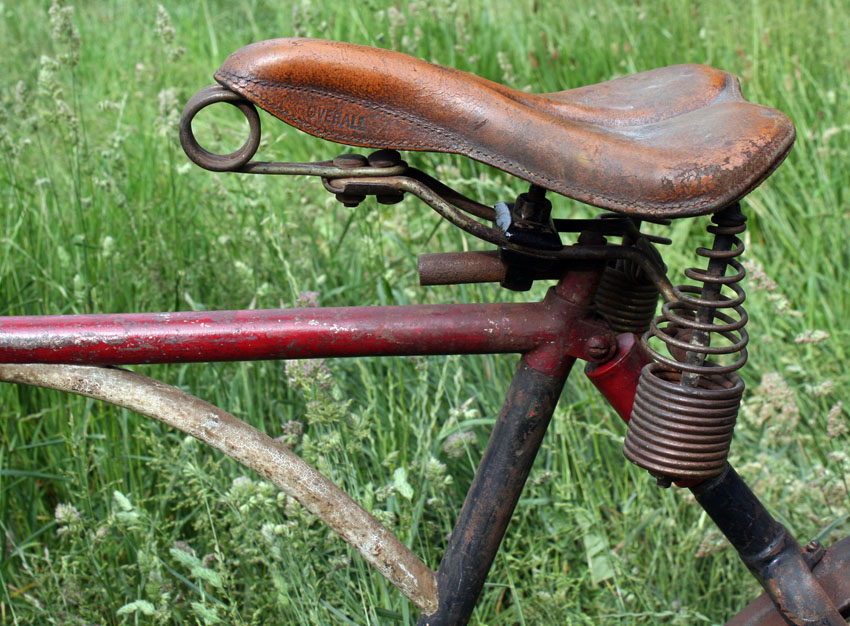 Over 110 years ago, when bicycle races drew crowds that filled Madison Square Garden, the biggest draw of all was Major Taylor. The New York race promoters who signed 19-year-old Marshall W. ‘Major’ Taylor to their team in 1898 knew fans would flock to see the ‘Worcester Whirlwind’ compete.  They also knew that controversy surrounding the ‘Colored Cyclone’ – whose star was rising in muscular defiance of the Jim Crow segregation permeating the sport – was sure to generate headlines. And any kind of publicity would be good for the box office.

Taylor won his first race at age 13 in Indianapolis. Soon bicycle manufacturer and former racer Louis “Birdie” Munger hired Taylor as a factory helper and nurtured his racing career. Blacks were banned from amateur bike racing in the United States in 1894, just as bicycling’s popularity surged. But the move stimulated the growth of black cycling clubs and black races, which gave Taylor his early opportunities to prove his ability. By the time Munger decided to set up a factory in Worcester — in part to take advantage of the biking boom, but also to find a more tolerant atmosphere for his black protege — Taylor was black champion of the United States.

‘I was in Worcester only a very short time before I realized that there was no such race prejudice existing among the bicycle riders there as I had experienced in Indianapolis,’ Taylor wrote in his 1929 autobiography, The Fastest Bicycle Rider in the World. But Race relations remained a challenge. In 1897 Taylor had to abandon the quest for national sprint points champion when Southern race promoters refused him entry to key competitions. When he did compete, hostility from white riders included conspiratorial race tactics, threats and physical assault. One time in Taunton, a competitor pulled Taylor from his bike and choked him into unconsciousness. The offender was slapped on the wrist with a $50 fine, but Taylor didn’t lose his nerve — or his popularity.

In 1900, when Taylor bought a house on Hobson Avenue in Worcester’s Columbus Park neighborhood, near Coes Pond, white neighbors were upset and offered to buy back the house for $2,000 more than he had paid.  Taylor refused.  In the end, the neighborhood grew to accept its distinguished black resident, whose racing career made him one of the wealthiest blacks in the country.

Taylor embraced religion after his mother’s death in 1898 and was a steadfast member of the John Street Baptist Church in Worcester.  For years, he resisted invitations to race in Europe because he refused to race on Sundays.  He finally signed a European contract in 1901, was welcomed as a hero in France, and proceeded to beat every European champion.

‘Major Taylor had a proud and confident identity in Europe and was not a crushed or threatened black man,’ Andrew Ritchie wrote in the 1988 biography Major Taylor (republished in paperback in 1996 by Johns Hopkins University Press). Though the European press always made references to Taylor’s skin color, the labels were largely to give him a strong, recognizable identity, not to judge him or comment on his social standing. ‘For the first time in his life, it was an advantage for him to be black.’

Ø 1892: Nicknamed “Major” because of a soldier’s uniform he wears while performing cycling stunts outside an Indianapolis bike shop.

Ø 1902-1904: Competes as a superstar in Europe, Australia, New Zealand and the United States, with a brief comeback in 1907 after a two-year hiatus.

Ø May 1948: Ex-racers have Taylor’s remains move d to a more prominent spot in Mount Glenwood Cemetery in Illinois and put up a marker stating:

“World’s champion bicycle racer who came up the hard way without hatred in his heart.” 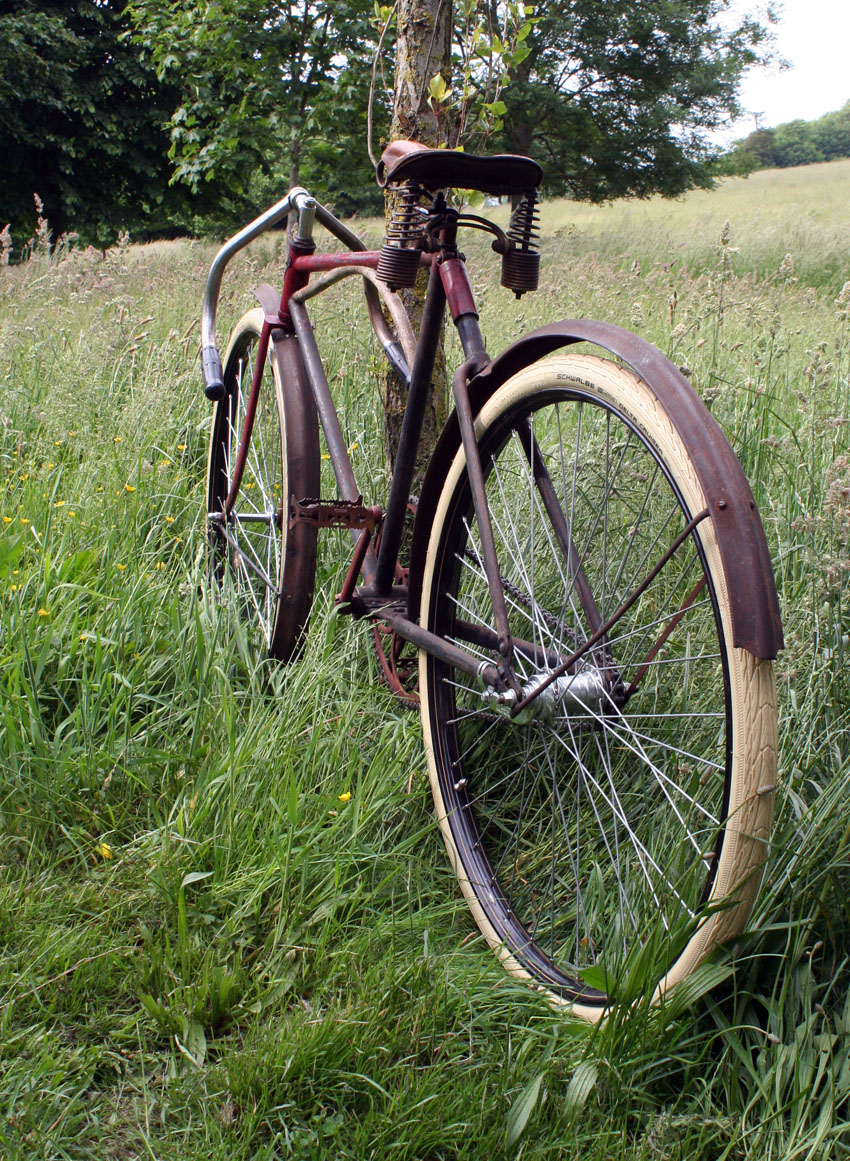