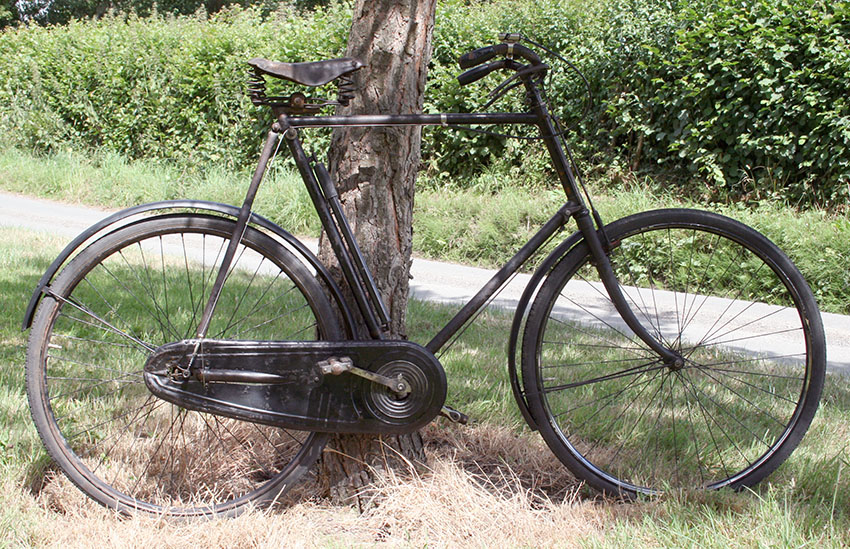 SINGER & Co Ltd, Stand No 120:
We are glad to find Messrs. Singer and Co. again among the exhibitors at the Stanley Show, and have little doubt that their present display will encourage them to take part in the future exhibitions held by the club. They have quite a long range of patterns at 6, 7, 8, 10 and 14 guineas in bicycles, and 18 and 20 guineas in tricycles, while juvenile machines are shown at 5 guineas for boys and £5 10s. for girls. The 6 guinea “Royal” is fitted with Cambridge tyres, roller brakes, and is finished with lining on the enamel. The next higher price includes Dunlop tyres and Brooks’ saddle. The 8 guinea model is finished in green, and there is a “Special Speed” model at this price, with wood rims, cemented-on tyres, and celluloid covered handlebars. It weighs about 20 lbs., and those who are familiar with the model will recognise that the price has been considerably reduced for the coming season. The 10 guinea type is an excellent machine. It is finished in black and gold, and has oil-bath gear-case and extended front mudguard. Only one guinea extra is charged for either a two or three-speed gear on this model. The Grand also has an oil-bath gear-case, and is finished in either the well-known Singer chocolate or in black, with gold lines. The back and front rim brakes are provided with enclosed springs, and present a neat appearance. The tricycle has the well-constructed Singer back axle, and is made in two grades, as already intimated. It is built in patterns suitable for use by ladies and gentlemen respectively, and a free-wheel can be fitted at an extra charge of two guineas.