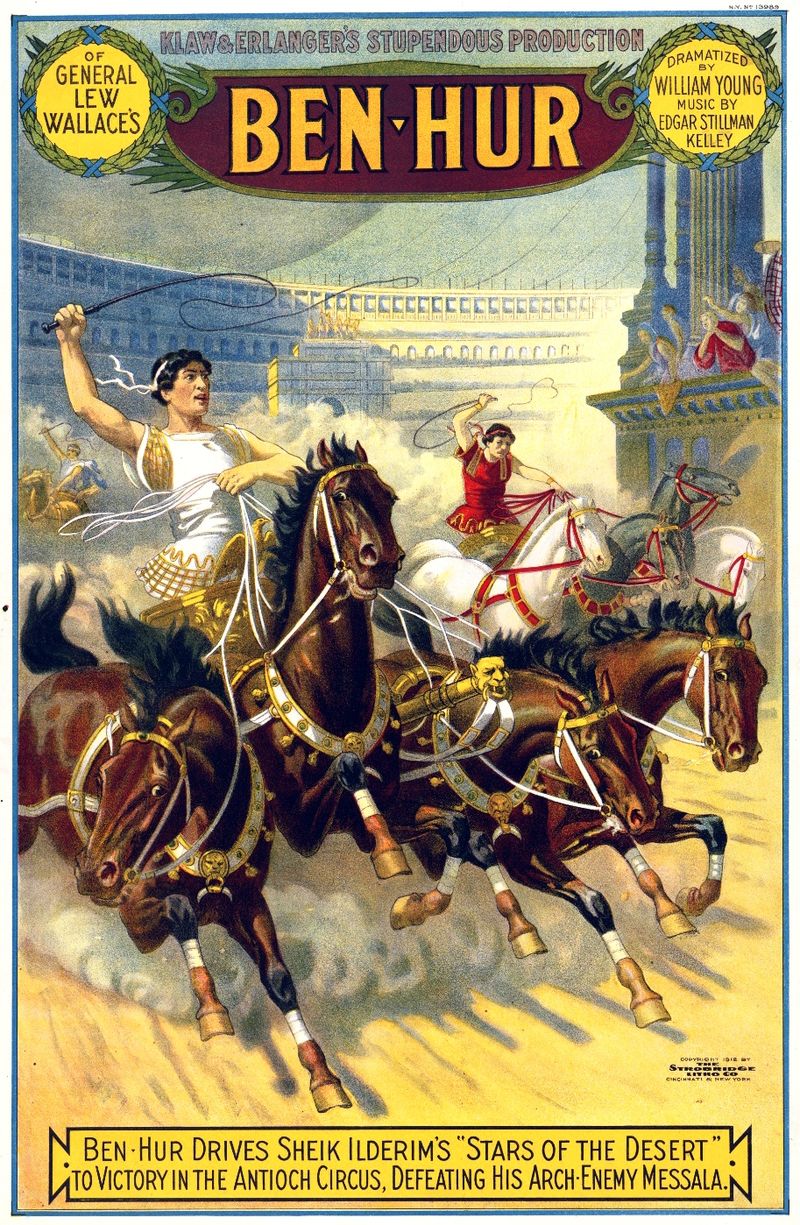 The first time the public met the hero ‘Ben Hur’ was in a religious book from 1880, written by Lew Wallace. Today, most people are familiar with the name because of the renowned 1959 movie ‘Ben Hur’ – which had the largest budget of any movie made to date. With Charlton Heston as the leading character, it became  the second-highest-grossing film in movie history after ‘Gone with the Wind’ and the nine-minute chariot race has become one of cinema’s most famous sequences. There were two other Ben Hur movies: the first cinematic adaptation was an epic 1925 silent film with Ramon Navarro in the tile role; and a new Ben Hur film was recently released.

But the first adaptation of the book was for the stage, with the chariot race the centrepiece …and run with real horses on giant treadmills! The stage production opened at the Broadway Theater in New York City on November 29, 1899, and became a hit Broadway show. Traveling versions of the production, including a national tour that ran for twenty-one years, played in the United States, Great Britain, and Australia. By the end of its run in April 1920, the play had been seen by more than twenty million people and earned over $10 million at the box office.

At 57″ long, it was the top-of-the-range Irish Mail child’s handcar, and was advertised with a spare wheel mounted at the rear, over the gear-case. Hill-Standard was the leading manufacturer of wheels for children’s toys, founder Hugh Hill having been the initial patentee of the ‘Irish Mail’ style of children’s handcar, which was named after the one man speeder in use by railroad employees for making their rounds. The first Irish Mail went on sale in 1906, promoted as a healthy toy because it built up children’s muscles as it was pumped: 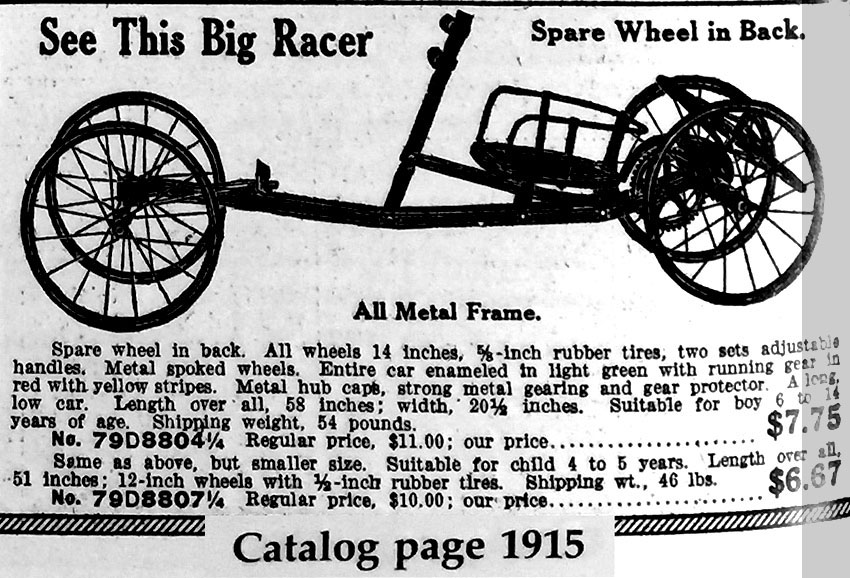 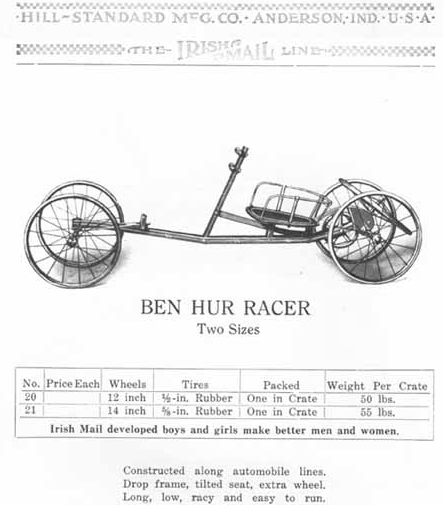 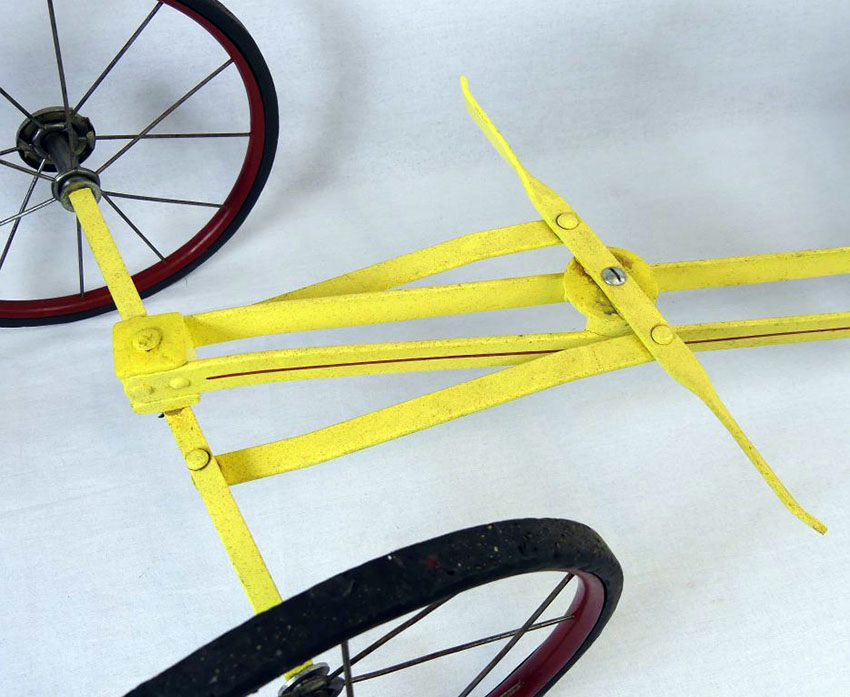 PARENTS – HERE’S HEALTH AND PLEASURE FOR YOUR BOYS AND GIRLS

The ‘Irish Mail’ Car is the only form of outdoor exercise for children that keeps them in robust health.

It is worth more than any medicine or ‘tonic’ on earth, because it is a perfectly natural method of forcing pure, fresh air into the lungs.

It assists digestion, soothes the nerves, reddens the blood, and develops strength and regularity of the heart action.

Arms, hands, wrists, shoulders, legs, ankles, back and chest are evenly developed by the steady forward and backward ‘wiring’ movement necessary to propel the IRISH MAIL.

No strain upon any part – no over-exercise of the legs at the expense of the chest, arms or back, as with the tricycle.

Speediest of all the children’s cars, because GEARED, yet can’t upset, as it is built so close to the ground.

Made of steel and selected hickory – simple, durable (not a ‘toy’ car) – no complex parts to break or get out of repair – will last for years with reasonable use.

Rubber tired, smooth, quiet, safe, easy-running – the IRISH MAIL runs without the nerve-racking clutter of the velocipede or wagon.

So get an IRISH MAIL today and start them on the road to perfect health. Their bright eyes, rosy cheeks and well-developed little bodies will be your best reward. 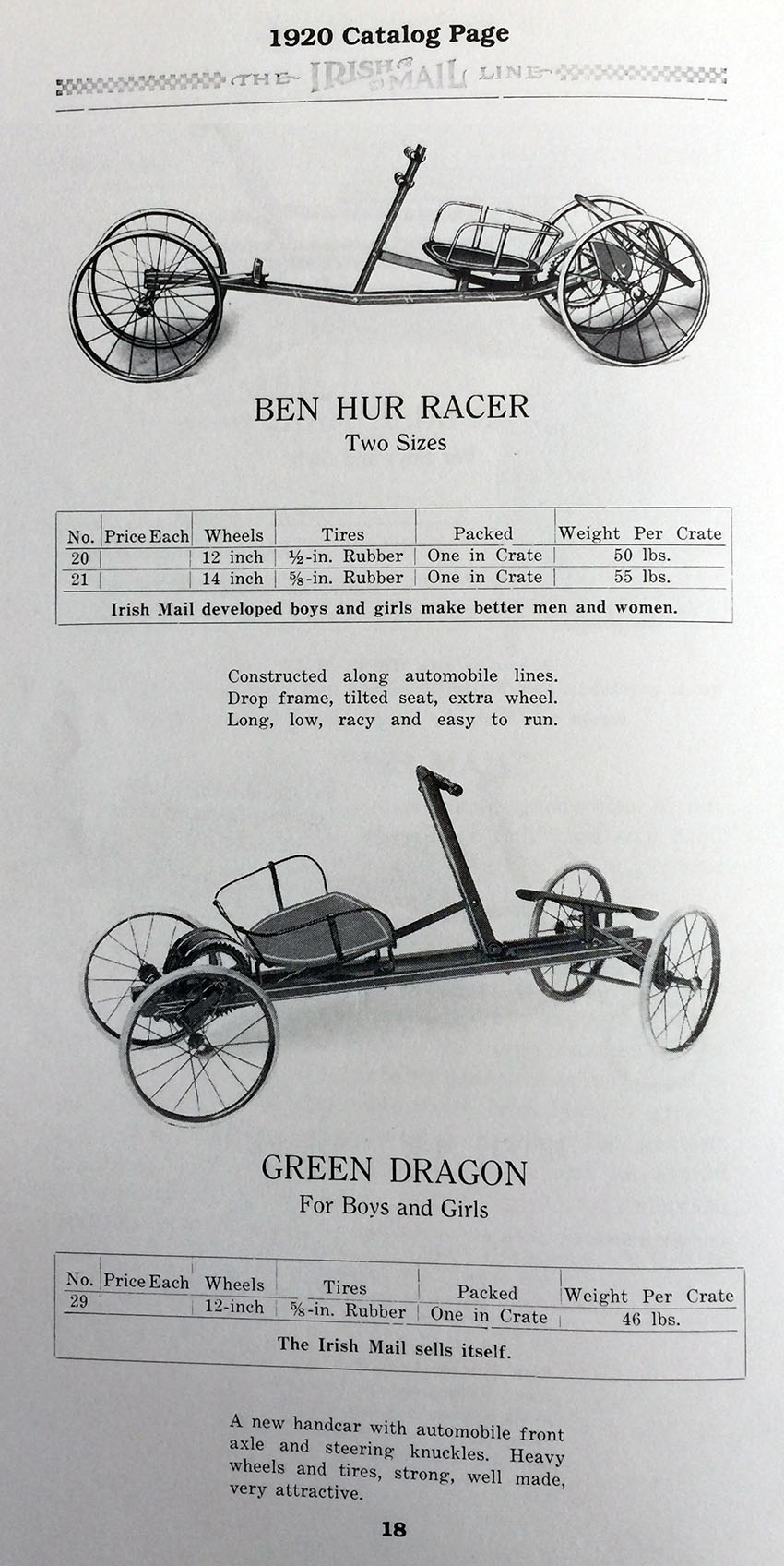 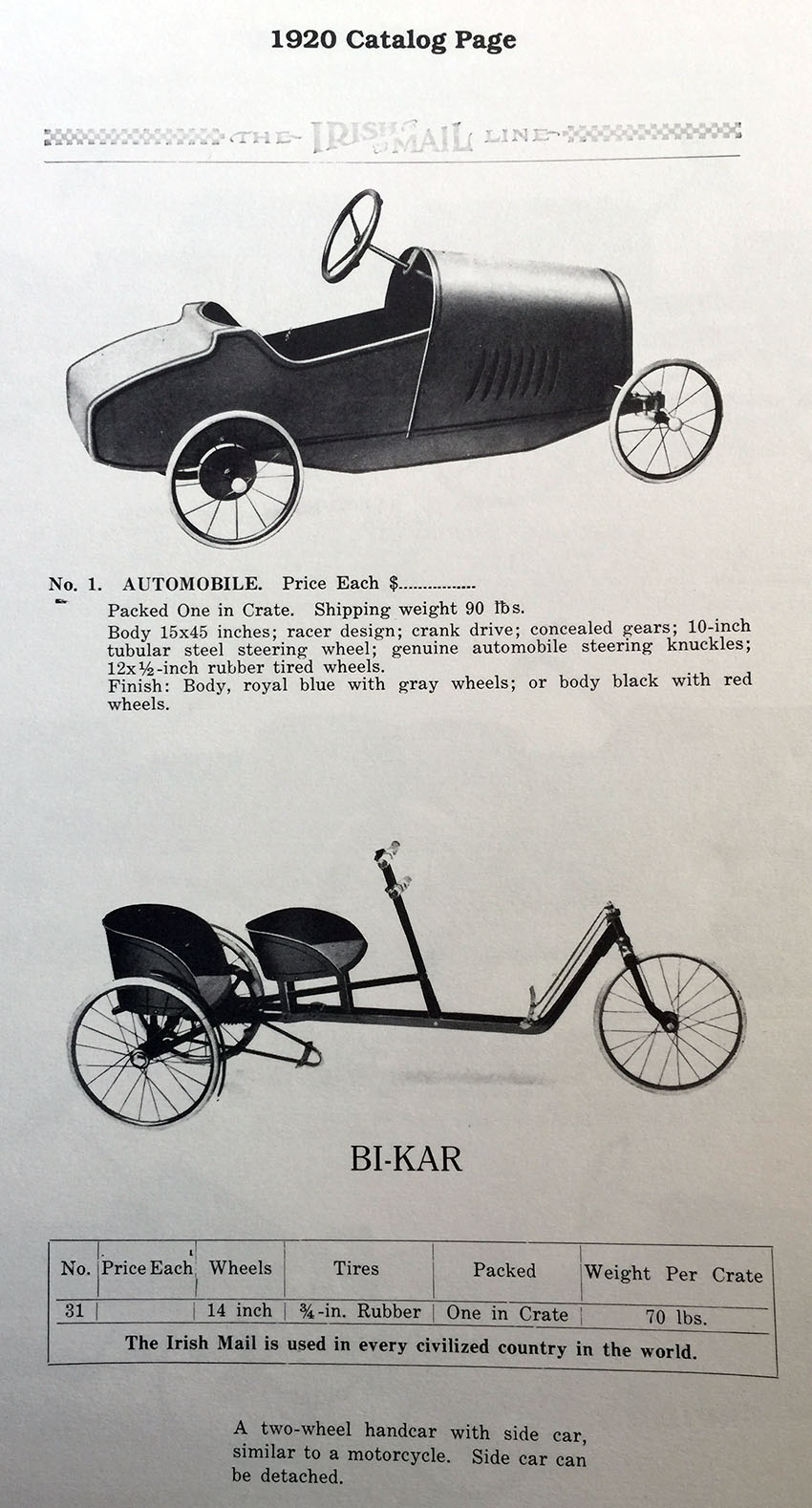 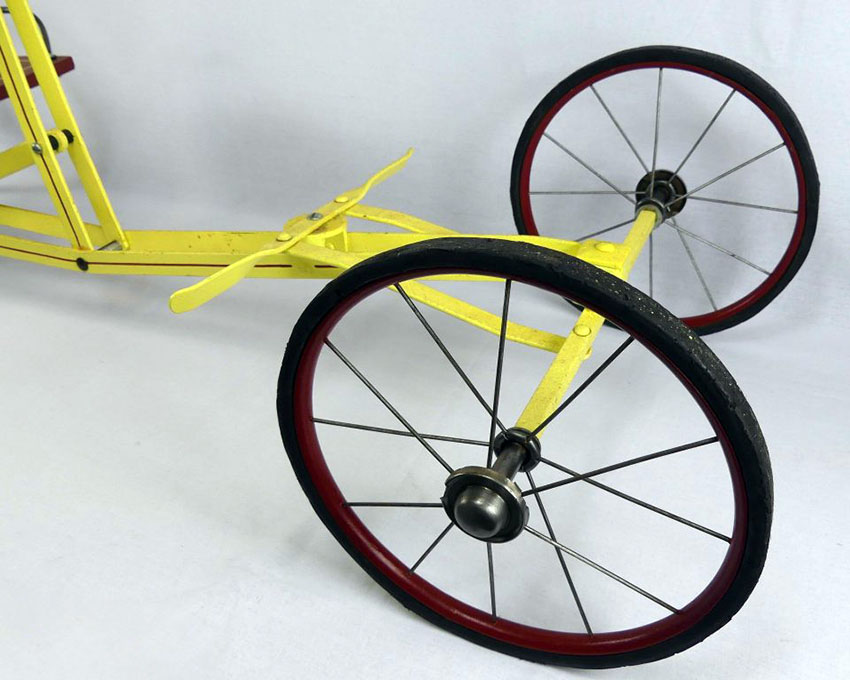 Hugh Hill was born in Ohio in 1862, but his father moved the family to Anderson when Hugh and his brother were two. In 1888, Hugh joined his father and his brothers to form the Hill Machine Company. For the next 14 years, Hill played with a series of inventions and the Hill family developed a pump manufacturing company (called Hill-Tripp and then Hill Pump) and Hugh Hill developed several tools, both original patents and improvements on existing models. To market his inventions, he formed a company called Hill Tool in 1900.

One afternoon in 1902, while riding the interurban home to Anderson from Indianapolis, Hugh Hill saw a little boy on a sidewalk pumping a small, wheeled toy with his feet. As he watched the child he became intrigued with an idea for a child’s toy that would be propelled by pumping it with the arms.  In his home workshop, he tested ideas and finally came up with toy that had a long, rectangular seat, four wheels and a handle to pump the toy along.

He asked his 4-year old son, Robert, to test it for him and they went outside.  Robert pumped the toy up and down the sidewalk easily. As the test came to an end, a man approached Hill and told him he would like to buy the toy for his own son. Hill happily sold his prototype to the man, probably because he already knew he would be making more toys. A lot more toys.

Hill’s new toy — literally and figuratively — changed everything. He formed another company, Standard Manufacturing, to handle the manufacturing of new toy. The toy needed a name and the company decided to call it the Irish Mail, after the Irish Mail train, the fastest train in the world at that time.

The new toy was instantly popular.  The Irish Mail was especially a boy’s toy.  Pumped with the arms and steered with the feet, it took some skill and strength to run it properly.  Compared to it, a tricycle (a girl’s toy) was for sissies.

Within a few years, Hill merged his two companies to form the Hill-Standard Company, which continued to market tools for a while, but was soon completely given over to toys.

In 1910, the company began to manufacture their own toy wheels and became one of largest producers of light wheels in the world.  More models followed. An Irish Mail with a shortened seat and a truck bed was called the Irish Mail Delivery. There was a tandem Mail for two. A Ben Hur racer looked vaguely like a chariot.

The company added a line of scooters and, later on, playground equipment.  Branch factories in Kokomo and Toledo, Ohio were opened to help with demand.  The Irish Mail was sold worldwide; Hugh Hill took great pleasure in travelling to Europe and South America and introducing his toys there.

Hill-Standard’s heyday was the early 1920’s. The company had just added a line of playground equipment and they won a Gold Medal at the Brazillian International Toy Exposition for the best display and for the Irish Mail.

The company was producing 4 million light wheels a year and estimated that it had sold over 1.5 million Irish Mails in a 20-year period. Unfortunately, tastes and times change. The Hill-Standard Company did not survive the Depression and went out of business in Anderson in the mid-30’s.  Hugh Hill retired from manufacturing and remained in Anderson. He died in 1948. 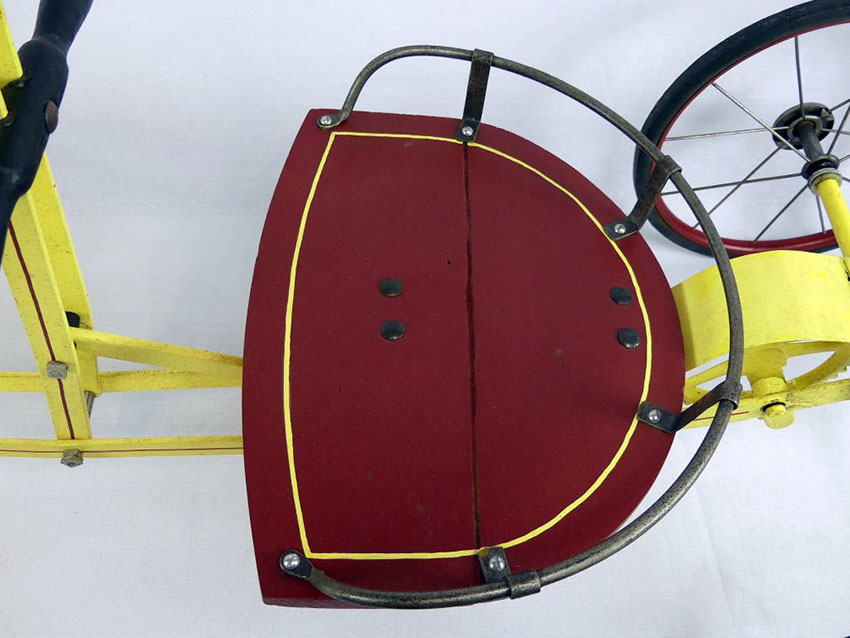 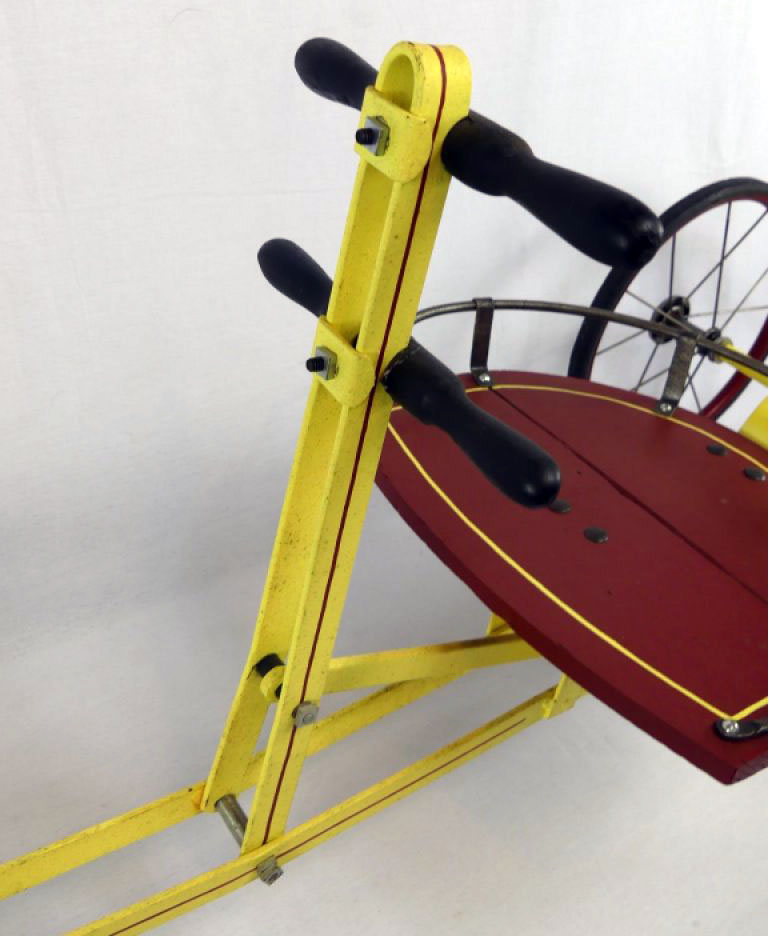 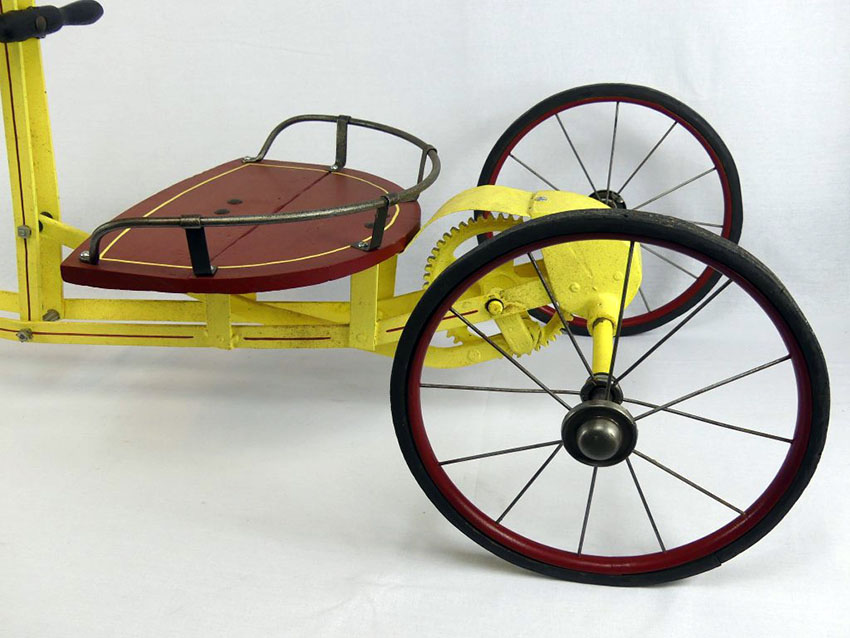 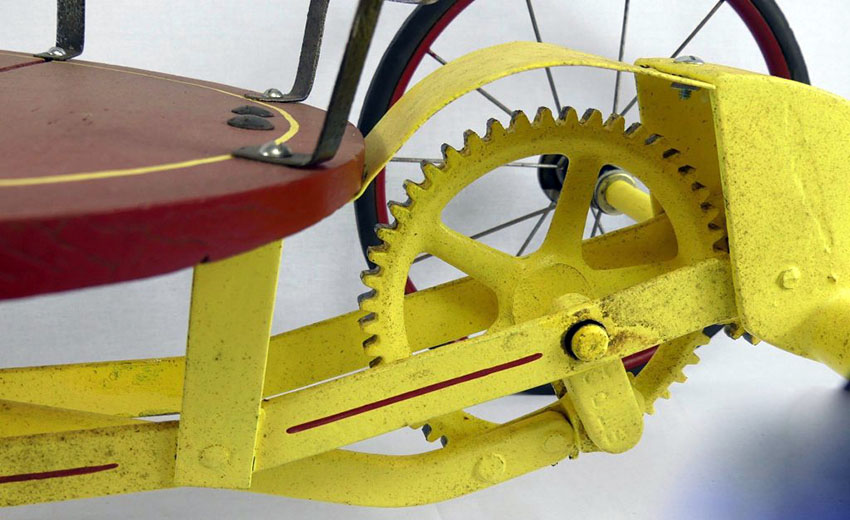 CHARIOT RACING THROUGH THE AGES 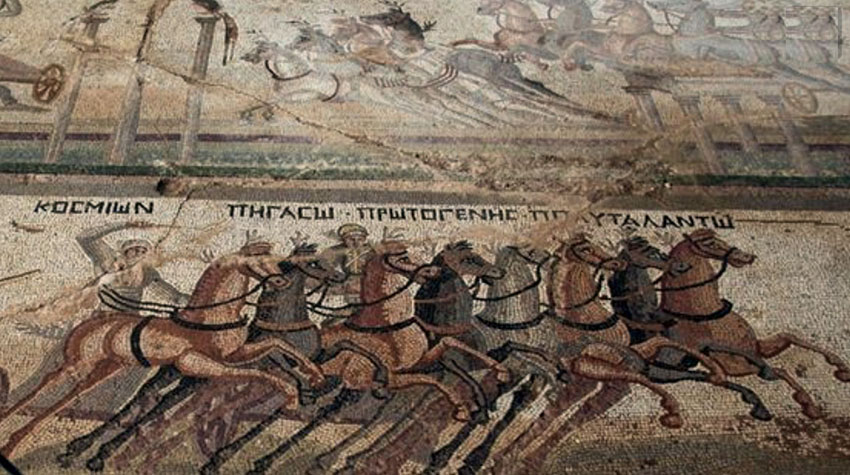 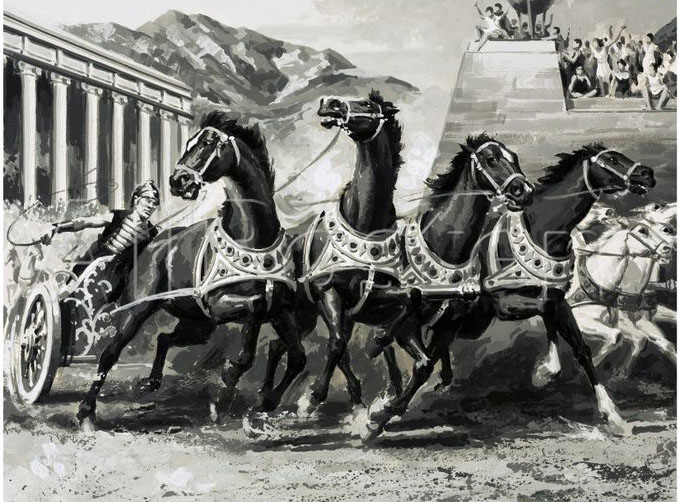 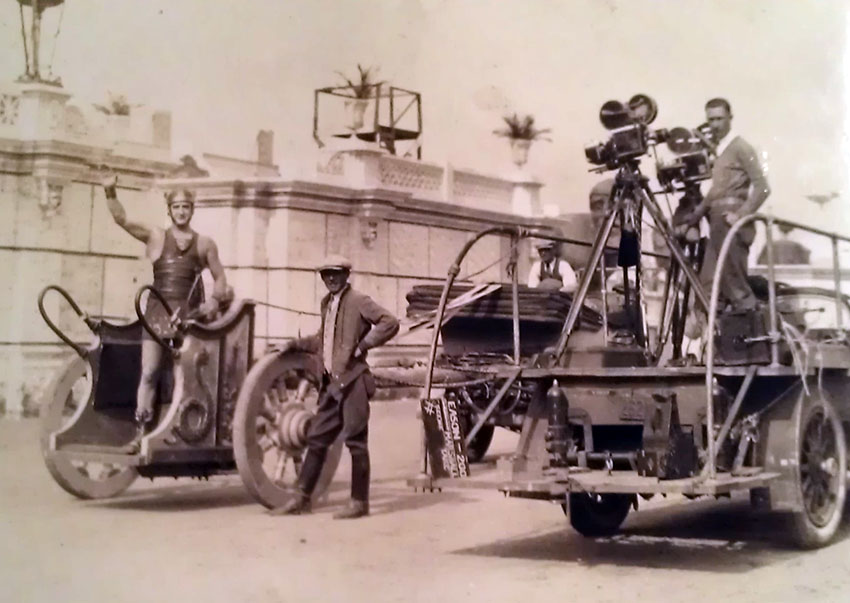 In the 1930s, chariot racing with motorcycles became popular in America and Australia and Europe. 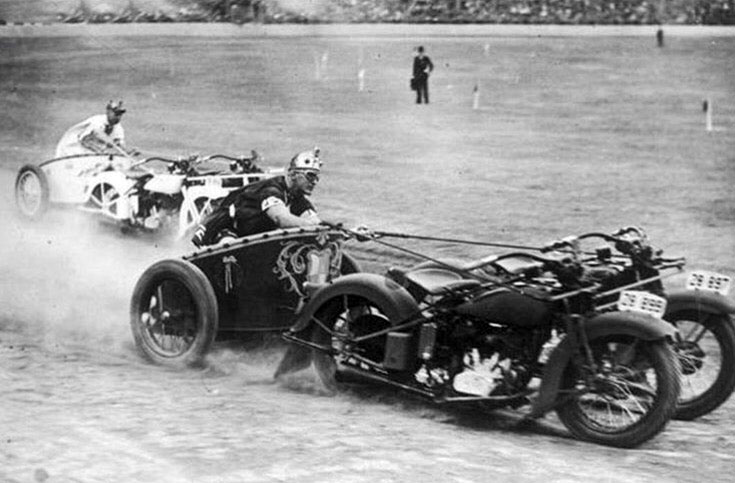 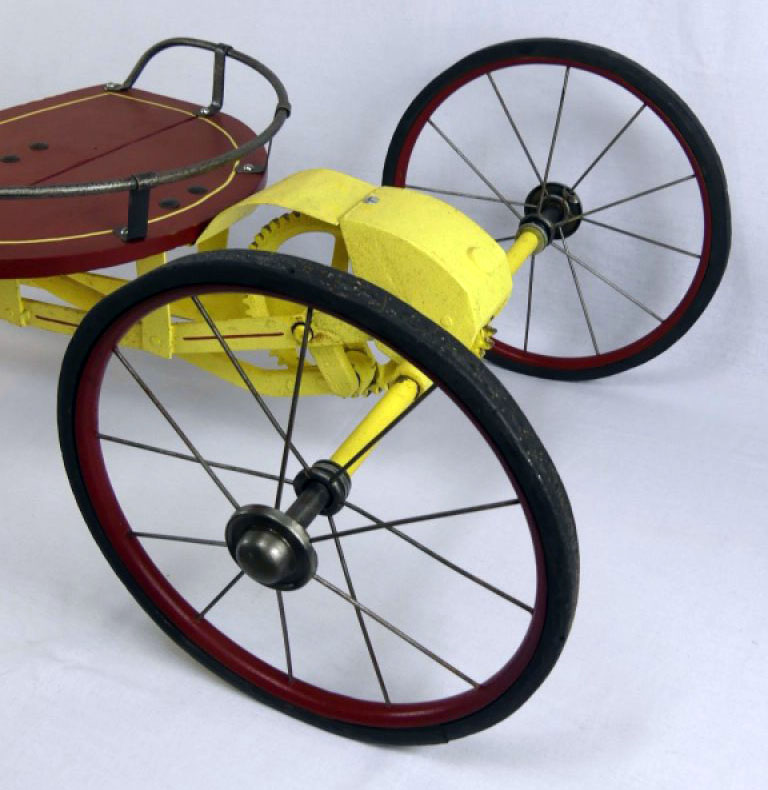 Hugh Hill info with thanks to –

Ben Hur info with thanks to –