The GYS Engineering Co of Bournemouth listed its cyclemotor attachment engine from summer 1949, with a marketing office at 44 St Pauls Crescent, London NW1.

The earliest traceable reference to the first front wheel drive cyclemotor appeared as an entry in ‘The Motor Cycle’ of 23 June 1949, announcing that “Deliveries of the new GYS attachment are due to start next week”.  The makers were advised as GYS Engineering Co Ltd, High Clements Yard, R L Stevenson Avenue, Westbourne, Bournemouth, Hampshire, with Eustace Watkins as sole London distributors.  The retail price was posted at £21, total weight of the complete unit given as 14 pounds, and claimed output of 1.2bhp @ 3,500rpm would probably seem rather an optimistic exaggeration from the primitive 49cc deflector top engine.

Using the above serial number table, this example was made in November, 1949, and was the 21st engine unit to be built in that month. As you can see from the photo below, printed in ‘Moto Revue’ magazine, the GYS was the first cyclemotor made in Britain. For the first 6 months, GYS engine units were made in Bournemouth, in lock up garages and workshops behind No 9 Robert Louis Stevenson Ave, Westbourne. In December, 1949, production of the unit was switched to the Cairns Cycle and Accessory Mfg. Co. Ltd., Stoneswood, Todmorden, Lancs. This one is a rare surviving example of those made in Bournemouth.

This rare early Cyclemotor is in good general condition. The bicycle is in full working order. The engine has been cleaned, however there is not much compression so it will need attention. 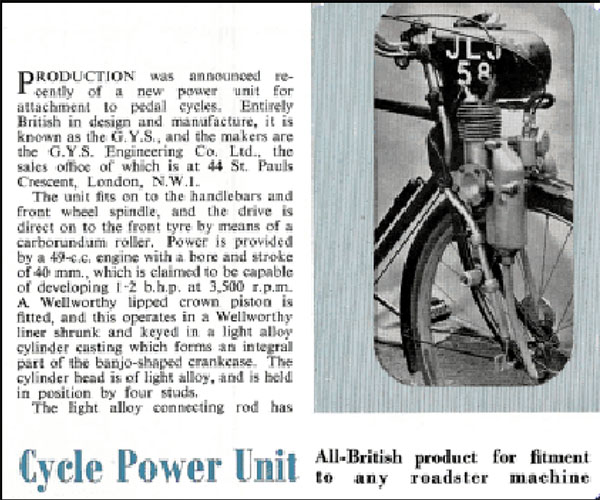 The address of High Clements Yard is recorded as owned by Robert Clement, and generally described as an “old area behind R L Stevenson Avenue, with lots of stabling and lock-up garages”.  It appears that some of these buildings were being variously numbered for use as small business units:

The 1947 edition indicates no sign of GYS Engineering Co Ltd, but records the occupancy of two businesses in Number 5: Clements Motor Eng, and A B Green & Son, General Engineers.  Address 9A is listed to a ‘Cab Proprietor’.

The 1952 directory contains no trace of GYS, and indicates Number 5 as lock-up garages to Clements Motor Eng, and further storage for the window display company.  Address 9A is listed to Westbourne Engineering Co. – proprietor A J Green; Clesly – builder; and Ives Motor Eng. Ltd. engine reconditioning with head office in Leeds.  Address 9B is listed to Chapeltown Light Industries, Precision Engineers, and other occupancy to Bournemouth Motor Engineering.

The 1955 directory still indicates address 9A as listed to Westbourne Engineering Co. – proprietor A J Green, and Clesly – builder.  Address 9B to Chapeltown Light Prec.

Apart from the Bournemouth directories, another obscure reference can be found on page 591 of the December 1949 edition of British Cycles and Motor Cycles Overseas, headed “GYS Engineering” … “F R Sampson has resigned from the board of GYS Engineering Co Ltd, and as a result the firm has decided to close its London sales office.  All correspondence will be dealt with in future at the head office and works, 9a R L Stevenson Avenue, Westbourne, Bournemouth.”

Qualification of the 9A address pretty effectively confirms that either A B Green or A J Green (presumably the son) represented the ‘G’ in GYS. Despite his ‘dairyman’ occupational entry, sharing the same address at exactly the same time might appear just too circumstantial for William J Young not to be involved with the business, so he probably represented the ‘Y’, and that F R Sampson (director) was almost certainly the ‘S’.

Therefore, GYS is seemingly the surname initials of Green, Young and Sampson.

It would appear that (1947) A B Green & Son General Engineers, represented as GYS Eng in 1950, and became (1952) Westbourne Engineering Co. – proprietor A J Green, when the son seemingly adopted the business.  Due to the ‘transition’, it’s unclear whether the A B Green (father), or son A J Green were represented in the GYS cyclemotor, but their engineering business certainly played a major involvement in its production, though it’s probable that other subcontracted services may have been required.

A small passage in The Motor Cycle magazine, dated 1 December 1949, presented that “Manufacture under licence of the GYS 49cc two-stroke front-wheel-drive cycle attachment is being undertaken by the Cairns Cycle and Accessory Mfg. Co. Ltd., Stoneswood, Todmorden, Lancs.”

Within just six months, manufacture of the cyclemotor unit was transferred from Bournemouth to the north of England, to be made instead by Automotive Components Ltd, Cairns’s associate company, also at Todmorden.

December 1949 – F R Sampson resigns from the board of GYS, and licensed manufacture transfers to Cairns Cycles in Lancashire.

1950 – Cyclemotor kit price £22-1s, and from April titled as GYS Motamite cyclemotor kit in some adverts.  Also listed as a complete machine called Cairns Mocyc, comprising the GYS mounted on a Cairns Cycle, price posted at £32-1s.  By July 1950 the price was being advertised at £34-1s-8d (including purchase tax).

1951 – Price continues as £22-1s for the cyclemotor kit.  Around 1,000+ engine units are estimated to have been built prior to introduction of a new engine number series during the year (somewhere between February and October 1951).

1953 – The official posted price was £21, but during the year became discounted to £16-16s in an attempt to stimulate sales.

1954 – Listed price was further reduced to £14-14s.  By November the ultimate bargain-basement price was offering a partially assembled kit for just 12 guineas!

1956 – Marked price increased to £19-2s-3d, though following the seeming clearance of remaining stock over the year, the kit became de-listed.

Recorded engine serials suggest that fewer than 2,000 Mocyc units were produced by Cairns.

Bournemouth directories up to 1955 continue presenting Westbourne Engineering Co with the same proprietor, so, like the departed F R Sampson, A J Green’s involvement with the GYS cyclemotor didn’t seem to transfer to Cairns Cycles in 1950, and he appears to have remained in Bournemouth.

In July, 2020, I took the GYS Motamite back to Bournemouth, and photographed it outside its place of birth at 9A Robert Louis Stevenson Ave, Westbourne. As you can see in the photo below, the workshops behind No 9 have now been redeveloped and houses built there.

Information and ads with thanks to – http://www.icenicam.org.uk/articles3/art0059.html