This is a chrome Comrade bicycle used for company exhibitions to advertise the Comrade Cycle Co products. This particular example has a chromed Cyclemaster built into its 28″ wheel.

Most Cyclemasters were built into 26″ wheels, and were not normally rechromed! It’s very unusual to see one in a 28″ wheel, and this is the only chromed combination.

This Comrade All-Chrome was manufactured as a copy of the Raleigh’s All-Chrome Superbe model, which were used as showroom display bikes in Africa, where the model was known as the ‘Boss-Bike.’

Simeon Taylor had a shop at 76 Pinfold Street, where he sold sports goods, and repaired bicycles at the back. He suffered from hearing difficulties and so his wife helped in the business. The Taylor family lived upstairs above the shop and had several children. Simeon built a workshop and started to assemble bicycles. Sometime later Simeon purchased an old nut and bolt factory on The Leys, in between Alma Street and Stafford Road, in which to manufacture bicycles and tricycles. The factory was previously occupied by David Harper & Sons.

It became a family business. Simeon’s daughter Florence, sons Jack and Richard, grandsons John and Philip*, and granddaughter Lynda also worked at the factory. They became well known for their high standard of craftsmanship.

Simeon died in 1960 after a long illness. By this time half of the company’s products were exported, and many competitors had ceased to trade because of cheap foreign competition. Comrade went on to become the largest independent cycle manufacturer in the country. The company was hit by the recession in the late 1970s and 1980s, and moved to new premises near the Bull Stake. Unfortunately it all came to an end in 1987 because of the continuing recession, and the large number of cheap foreign imports that flooded the market. 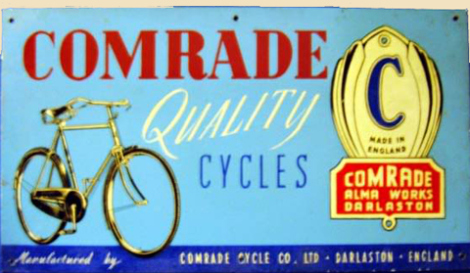 Comrade was once the largest independent bicycle manufacturer, and the second biggest bicycle manufacturer in Great Britain. However, the company is not very well known in this country, and the reason for this is that most of their bicycles were either supplied to Brown Brothers to be re-badged as Vindec, or were exported. Raleigh/ TI was the biggest British manufacturer, with around 40% of the market share. Despite being the second biggest manufacturer, Comrade’s share was less than 5%. To quote a 1980 trade report examining the previous 12 years:

‘It is normal for United Kingdom manufacturers to distribute their bicycles directly to the retail trade and imports are handled either by United  Kingdom subsidiaries or by independent importers/distributors who again tend to deal directly with the retail trade. There are, however, some 15-20 wholesalers in the United Kingdom of which Brown Brothers is the largest with  around 30 branches selling bicycles. Wholesalers are generally the source of supply for the very small specialist dealers, but some sell to the multiple stores as well.’ The trade report continues:

‘There are eight main manufacturers of bicycles in the United Kingdom  (T I Raleigh, Comrade Cycle Co, Dawes Cycles, Trusty Viscount, Elswick Hopper Cycles, Halmanco, Holdsworthy Co and Viking Manufacturing Co). The largest by far is T I Raleigh, which in 1980 had some 40 per cent of the market (about 29 per cent under the trade name Raleigh). Each of the other bicycle manufacturers accounts for less than 5 per cent of the market.’

British bicycle manufacturers have, throughout the lifetime of the bicycle, been a major part of the British export trade. In the late 1940s, the Government helped the bicycle industry with exports in order to generate much-needed foreign exchange. Along with the other bicycle manufacturers, Comrade sold their bicycles in the USA.

By the late 1960s, British bicycle exports were generally double that of manufacturers’ domestic market. Around this time, another important British export market was Nigeria. Both Raleigh and Comrade established factories there in order to assist with the supply and sales to the rest of Africa. An All-Chrome ‘Boss Bike’ model was used by both companies for promotion work.

Nigeria still has a love-hate relationship with the bicycle as a source of transportation. To some, it represents the past, and therefore painful memories of colonial rule, and poorer times when a bicycle was the only affordable transport. But, despite poor roads and danger from motorized vehicles, the bicycle is an ideal form of cheap transport and helps keep its rider fit. The Nigerian Transport Minister, Chief Ojo Maduekwe, became one of Africa’s most vocal proponents of cycling, despite being hit by a bus and forced into a ditch while cycling in 2001.

Darlaston history thanks to – http://www.historywebsite.co.uk/articles/Darlaston/Industries.htm