This Cyclemaster, mounted in a Raleigh Gent’s bicycle, is blessed with an unusual historical feature – a transfer (decal) from the shop that originally supplied it.

It was given to my friend after the garage closed. He restored the engine and serviced the bicycle, and it runs well. 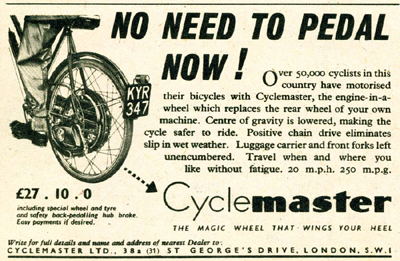 Did you know that the Cyclemaster was actually a German design?

After the War, some German engineers went to work for HNG in the Hague, Holland. The company imported cars and motorcycles and were thinking about developing a DKW 2-stroke car.

After the prototype was assembled it was realized that the production costs would be too high for what was, after all, supposed to be a low-cost car.

Bernhard Neumann, Rinus Bruynzeel and Nico Groenerdijke, three of the design team, discussed alternative projects. They had some blueprints for a 2-stroke engine that DKW had also developed – but had been abandoned because of the war. This engine had its engine, carburettor and petrol tank built into a wheel. After making a prototype they realized that its costs was also too high; however, with some modification they managed to
design an alternative, with the engine mounted over the front wheel. They demonstrated this to HNG once they’d developed a good working prototype. Their name for it incorporated the first two letters of each of their names, Bernard, Rinus and Nico – hence Berini. This 26cc engine was called an M13, and went into production in November 1949 at the HNG ‘Pluvier Motorenfabriek‘ factory (with many of the parts made in England). 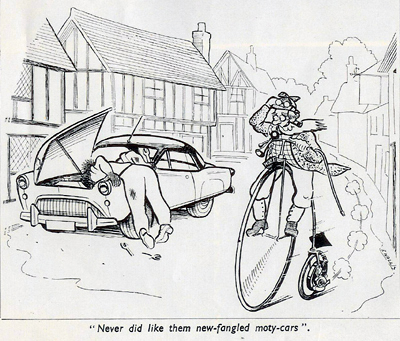 Germans were considered prisoners-of-war, so the blueprints for the original DKW ‘power wheel’ were confiscated by the Interpro Buro, a British, French and American organization that assisted Dutch postwar industry. You can see the words “Interpro Pats. Pend.” stamped on every Cyclemaster cover.

The blueprints were copied and the machine was manufactured at the EMI Factories in Hayes, Middlesex. The German name ‘Radmeister’ translated as ‘Cyclemaster’ and this was the name given to this radical new power wheel. It was marketed by a new company, Cyclemaster Ltd of 26 Old Brompton Road, South Kensington, London.

It made its first public appearance at the Utrecht Industries Fair in April 1950. The earliest engines were 25.7cc, being extended to 32cc in 1951. (The 26cc models are distinguished by their black colour, the 32cc models being silver).

The Town Crier of Tiverton in Devon is pictured below. The ‘Motor Cycle’ magazine of March 1951 features him with the new Cyclemaster wheel fitted to his bicycle.

The public here and abroad lost no time in snapping up new cyclemotors, and putting them into service commuting to work and for summer touring.

EMI gave many of their factories over to war work when War broke out, and their Hayes factory was bombed in 1944, killing and injuring many employees. They’d already had experience of motorized bicycles with their introduction of the Rudge Autocycle in 1939, though the Rudge was killed off because the factory was needed to produce radar equipment. Is this why EMI were awarded the rights after the War to manufacture the Cyclemaster wheel from the German designs?

This is from the diary of Alan B Chesterton, who lived near the EMI factory as a youngster during the war; his Dad worked at the plant when it was bombed.

Despite having important manufacturing plants like Fairy Aviation, ICI filling shells, EMI developing radar, we did not have many conventional air raids, we believed this was due to our near neighbors, the Polish airmen at Northolt Airfield. Official child evacuation stopped, much to our relief, three miles away at Southall, Middlesex.

As an eleven year old attending lessons at Grange Park Junior School, Hayes, on the afternoon of 7th July 1944 whilst in the classroom we heard a loud explosion which from experience we knew was a couple of miles away. After which, the air raid warning sounded and we all went into the surface shelter which was a converted cloaktoom with breeze blocks blocking the windows and scaffolding giving additional support to the ceiling. As children we sat on wooden benches below the pegs which carried out gasmasks and below wire frames which in peacetime held our plimsols.

With pilotless flying bombs known as V1s it was common for the warning to sound after the event and the all clear not to be given until the last batch of V1s had cleared the area. We weren’t allowed home until this occured, although after 16:00 parents could collect theirs and neighbor’s children. This happened in my case, and my agitated mother said the doodlebug had hit the EMI formally known as the ‘HMV’ or ‘Gram’, as before the war it manufactured radios. Now, it was war work on radar sets etc. As we left the school we met a neighbor who said “it’s alright, it’s missed the main factory and landed at the back on some huts”, not knowing this was the sales and service department, exactly where my father worked.

My father had heard the Red Alert given from the factory roof but thought he’d finish his cigarette before going to shelter A to take cover. During this period, the doodlebug landed between shelters A and B and the explosion caused the concrete roof to collapse onto its occupants. When at about 18:00, my dust-covered father cycled home unhurt, except for loss of hearing I was sent out to play, but still remember hearing my father telling my mother about the top portion of a girl in a pink jumper; face and legs covered in rubble, and that he estimated that twenty-three people had been killed, and many injured. Their memorila in Cherry Tree Lane Cemetery, Harlington indicates thirty-four killed, and eighteen injured.

A few months later, on a saturday lunchtime our terrier dog started howling in the back garden. I went out to see, and saw a doodlebug with it’s engine still running approaching. I called out to my parents and brothers and we had all dived into the Anderson shelter by the time the engine had cut. It fell on houses two hundred yards away in Hurstfield Cresent and Wrays Way. Many in my class lived in this area; three died immediately, three later, twenty-two were seriously injured, and there were fourty-five minor injuries. Once again, we lost roof tiles, windows, and plaster board ceilings (the original plaster and lathe went much earlier and were replaced with plaster board which could be refastened)

On the 21st October 1944 the first of our two V2s fell about 500yds away at Gledwoof Drive. Luckily, the ground was very soft so the rocket went deep, and less surface damage was experienced. Although as kids collecting shrapnel, it looked terrible, with mud everywhere, we were lucky and the other rocket that fell in the evening of the 7th December in a park at Hayes End, so once again, we escaped a major incident.

TO SEE THE VIDEO OF