The children’s ‘Irish Mail’ pedal car was developed from an early style of locomotion that predates the bicycle. The railways, introduced in the mid-nineteenth century, revolutionised society by providing cheap travel. Not only could local people now visit other areas safely and fast, but industry also had the means the transport goods cheaply and promptly. Rural areas benefited particularly.

As well as a regular train service provided by engines, small individual railway vehicles were built, for carrying one or two operators, primarily for track inspection or to convey engineers to repair track where required. The first models were geared, with a large lever used for propulsion. These machines were also used to transport mail in rural areas.

The ‘Irish Mail’ captured the popular imagination in America, and this style of toy became a ‘must-have’ for children from 1900 onwards. Like soap box derby cars and go-karts later in the century, kids not only used them while they were young, but built their own versions when they became teenagers and raced against each other.

These very basic ‘rowing machine’ tricycles and quadricycles inspired a German engineer in the 1950s to create a bicycle that used a similar form of propulsion. It became known as the Hercules Cavallo (Cavallo being the Italian word for a horse). 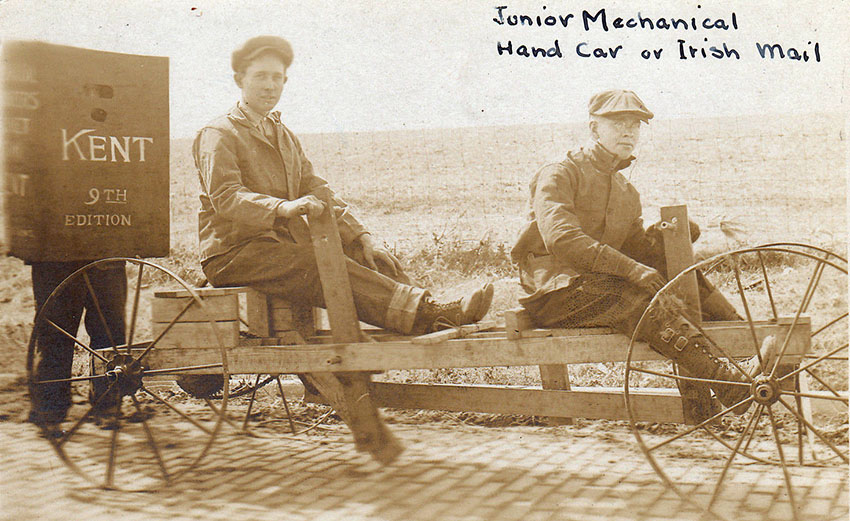 Compare the height of the Cavallo in the photos above and below; this is the extent of its travel, which provides its propulsion. 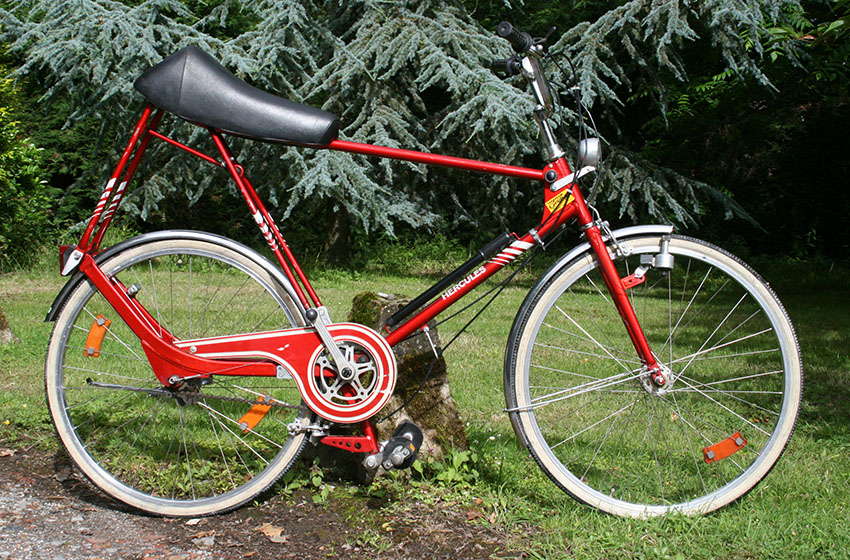 This example is in very good original unrestored condition, with decent paintwork and transfers (decals). The bell has the Hercules name on it. The Cavallo is fitted with a Torpedo three-speed gear, which allows it to be ridden quite fast if required. I was surprised how easy it is to ride.

CAVALLO: PEDALS UP, SEAT DOWN FOR MOUNING

CAVALLO: SEAT UP, PEDALS UP IN MOTION

You mount the machine with the saddle in the lower position. This is the bicycle’s natural position when stationary. When the seat is in the lowest (stationary) position, the handlebars are upright and the pedals are up.

Stepping onto the pedals and pulling on the handlebars starts the motion and, as the seat rises, the pedals move down (below). 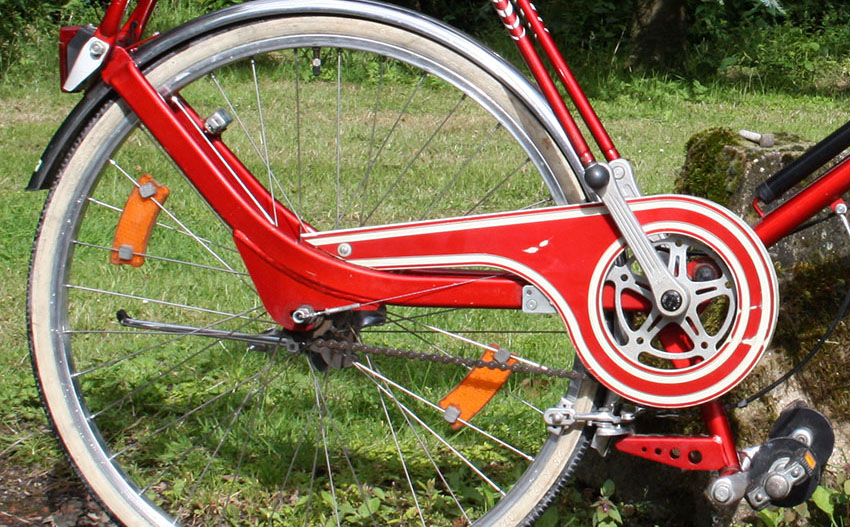 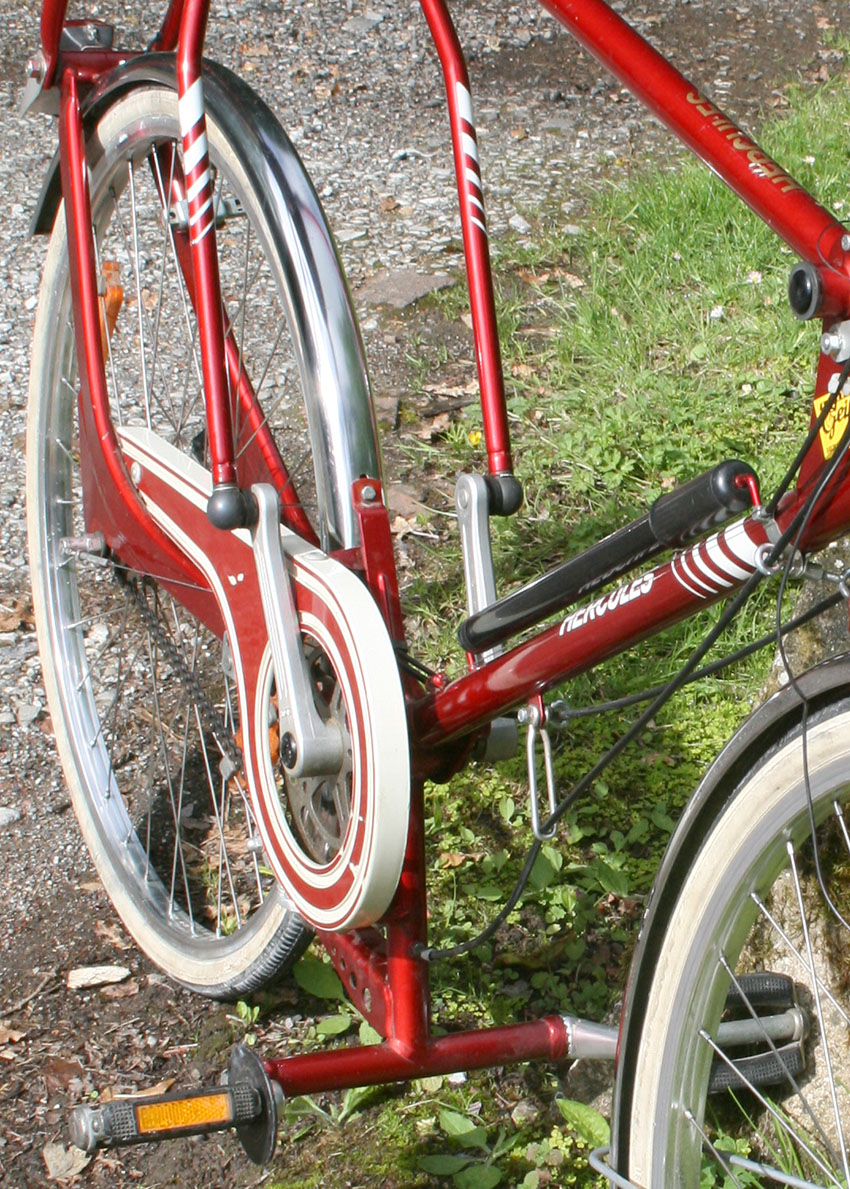 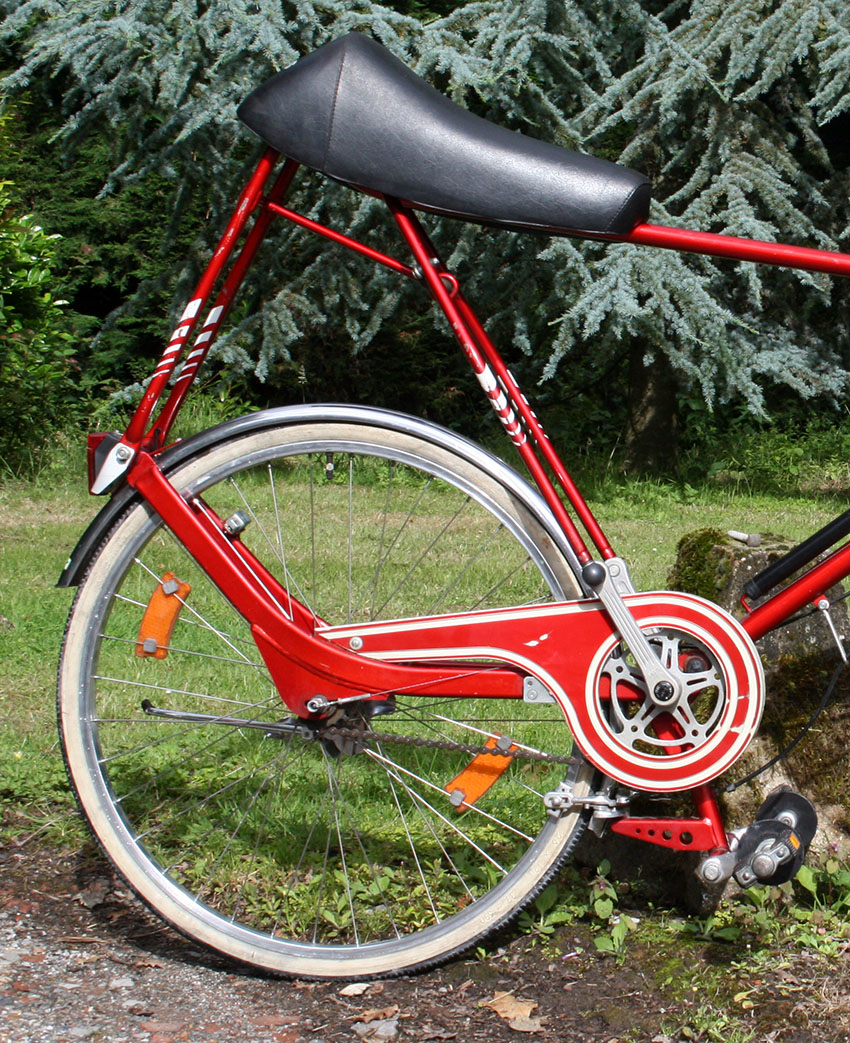 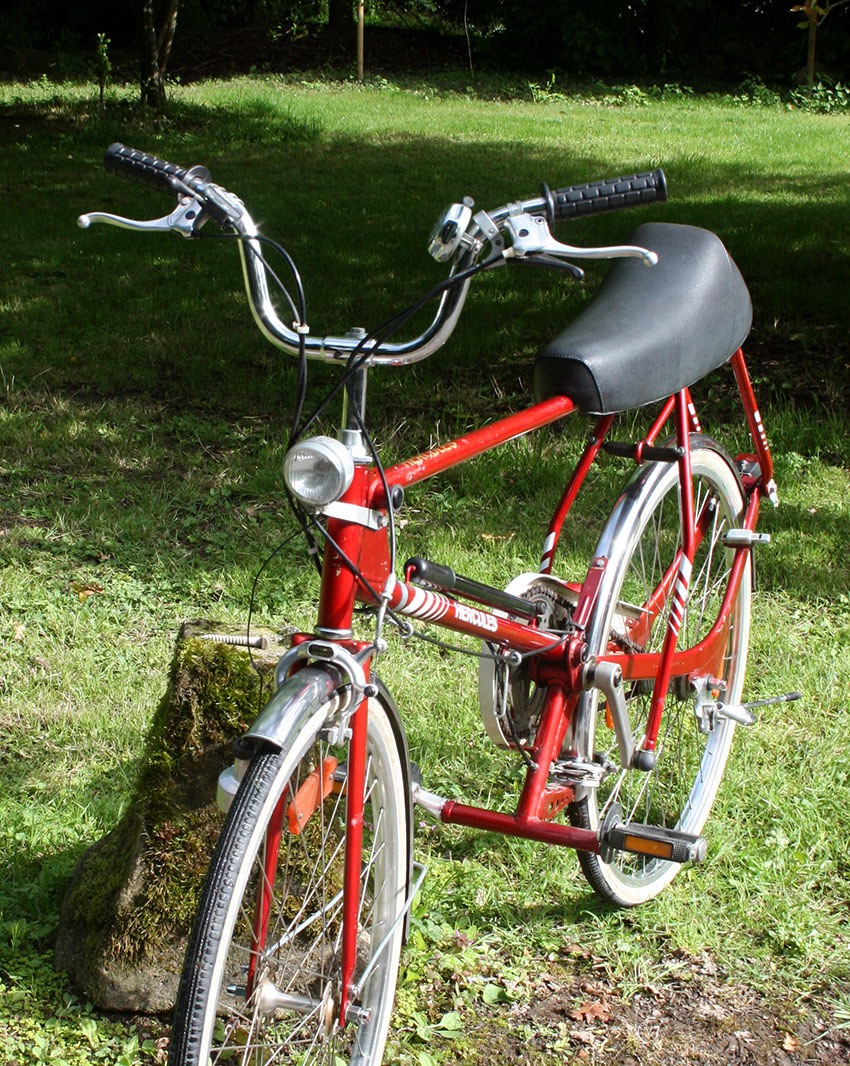 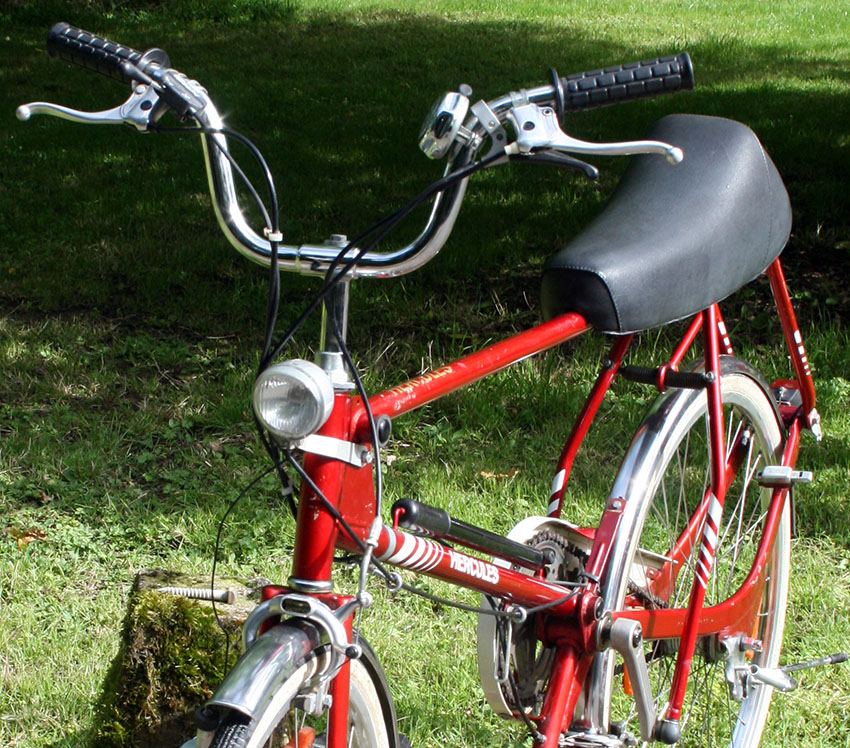 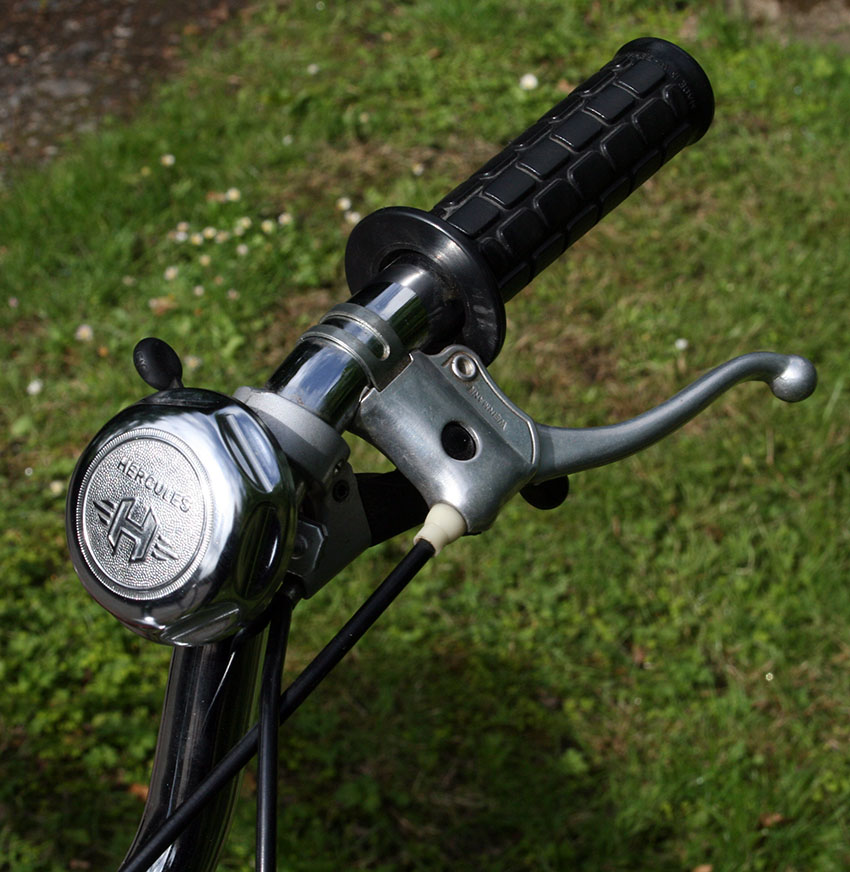 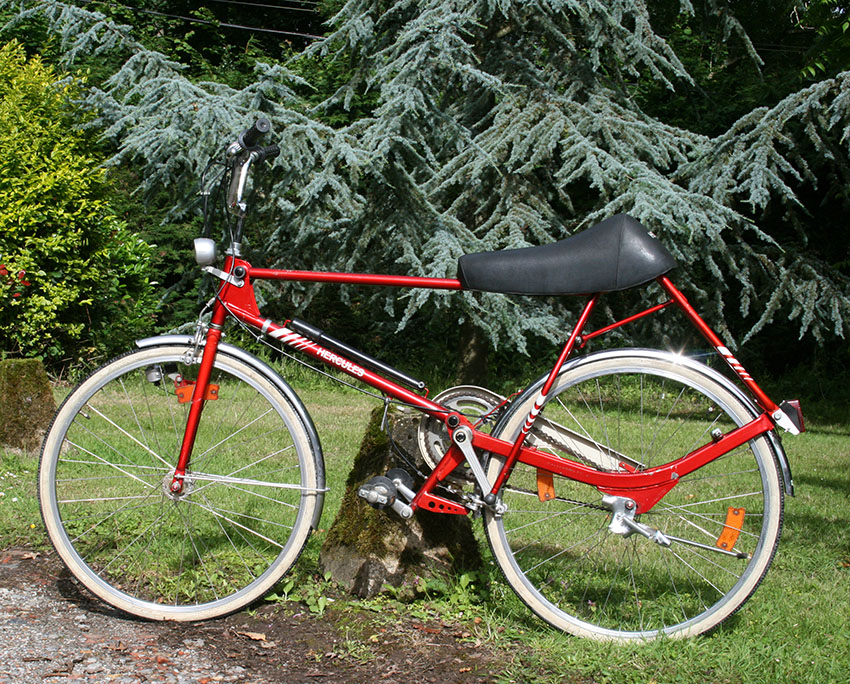 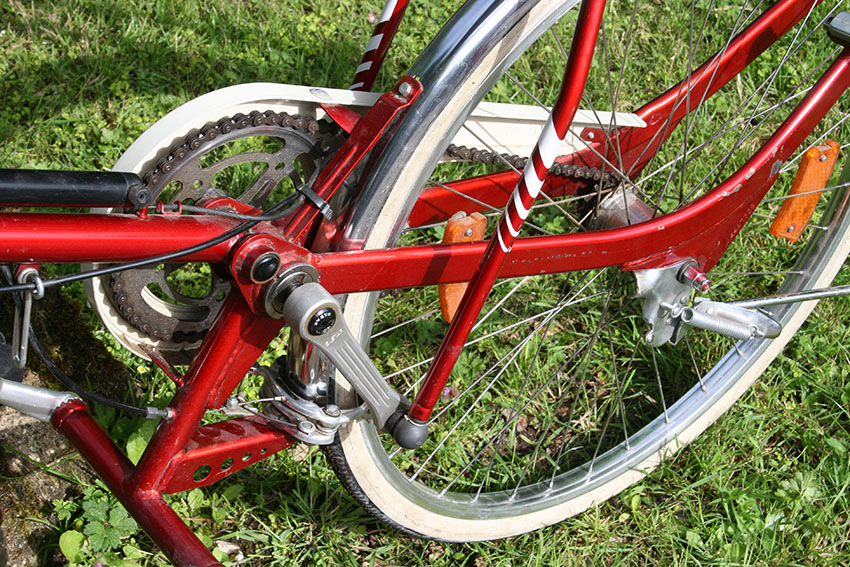 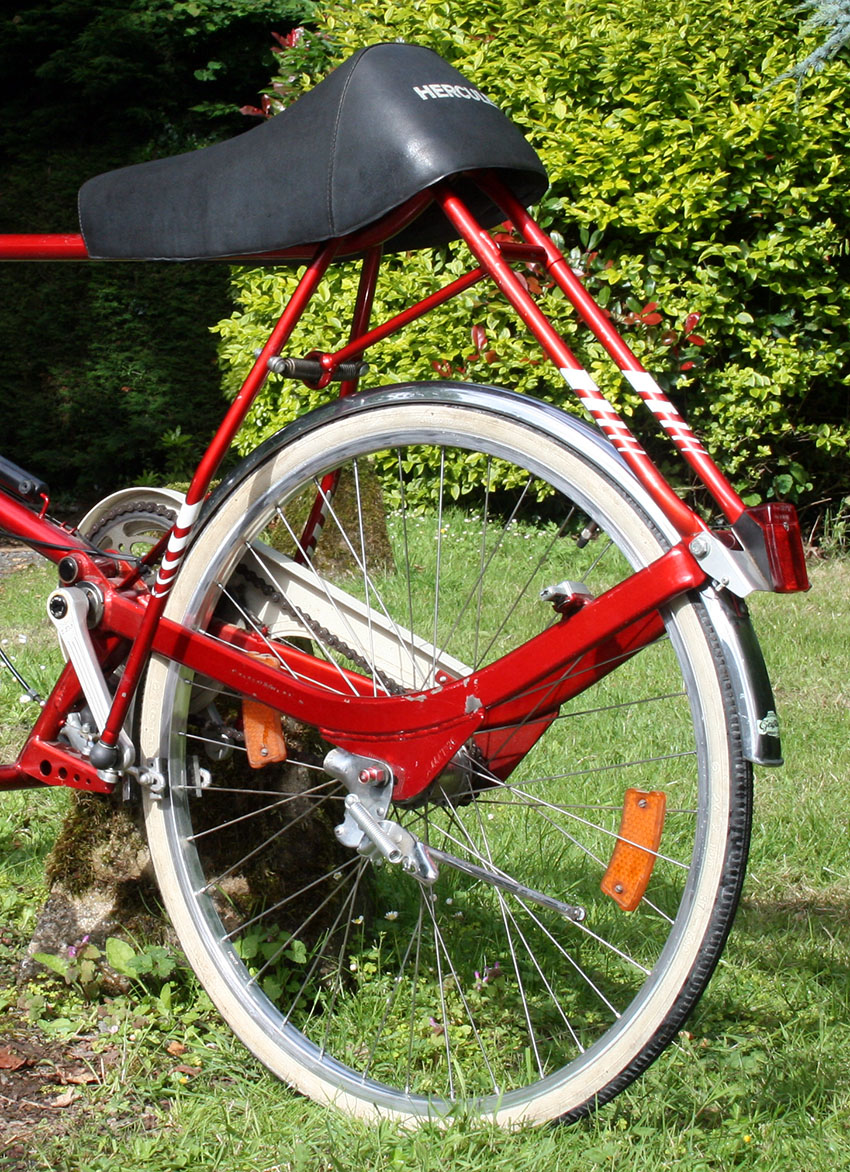 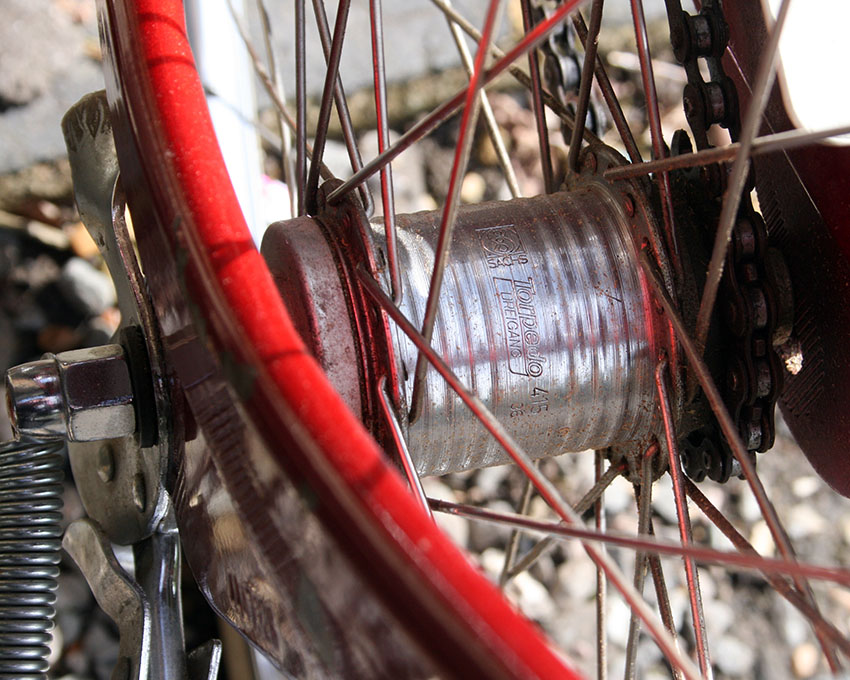 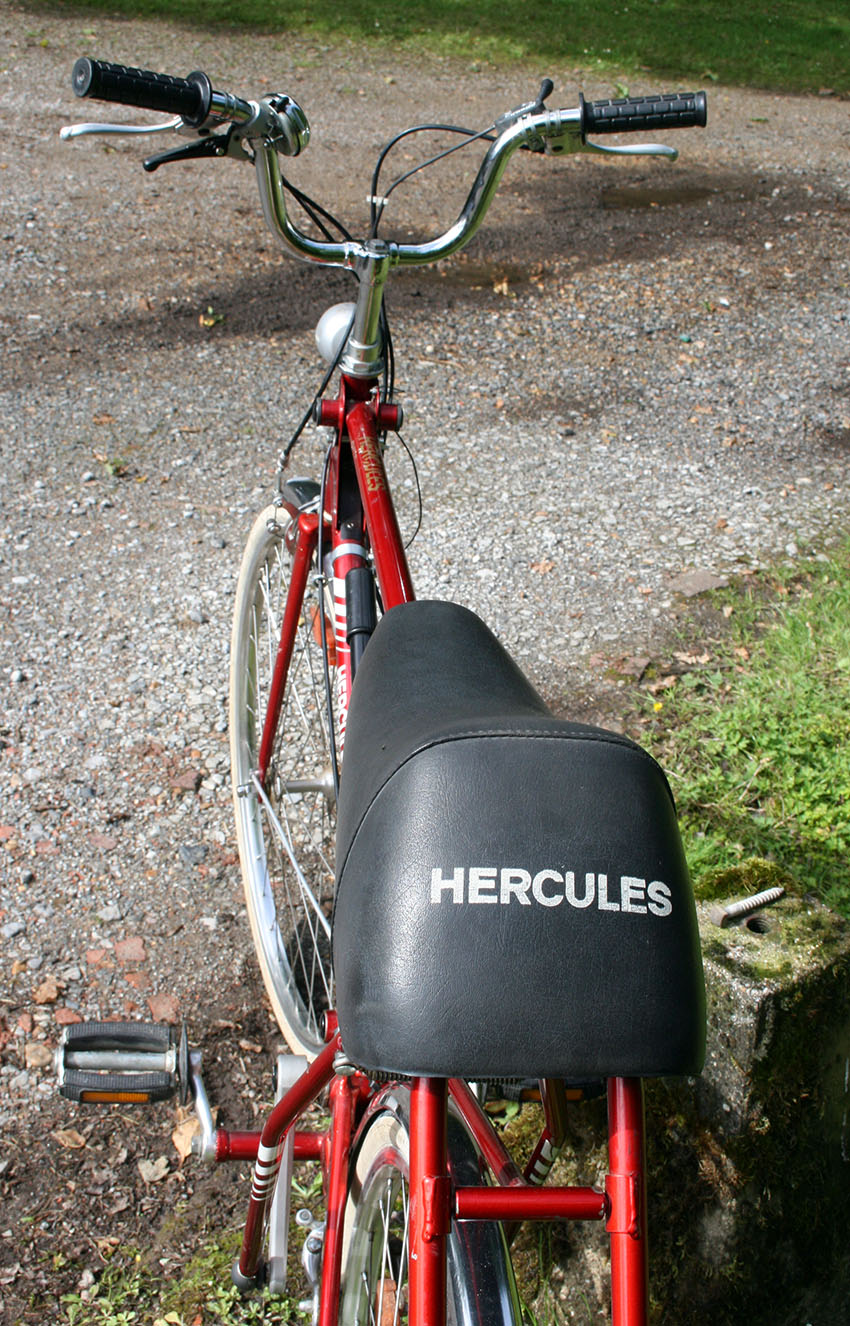 Ian road tested the Hercules Cavallo at the recent Amberley Veteran Cycle Day. You can see a video below. 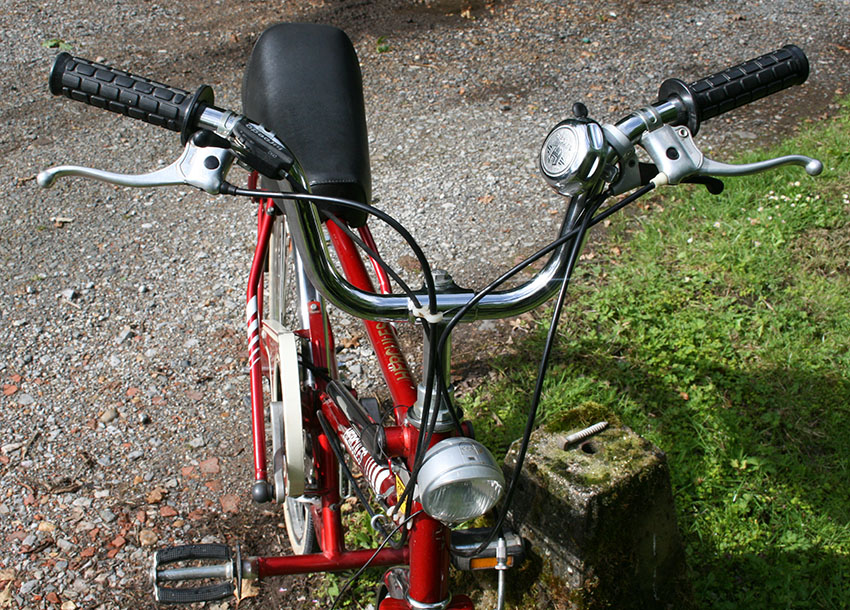 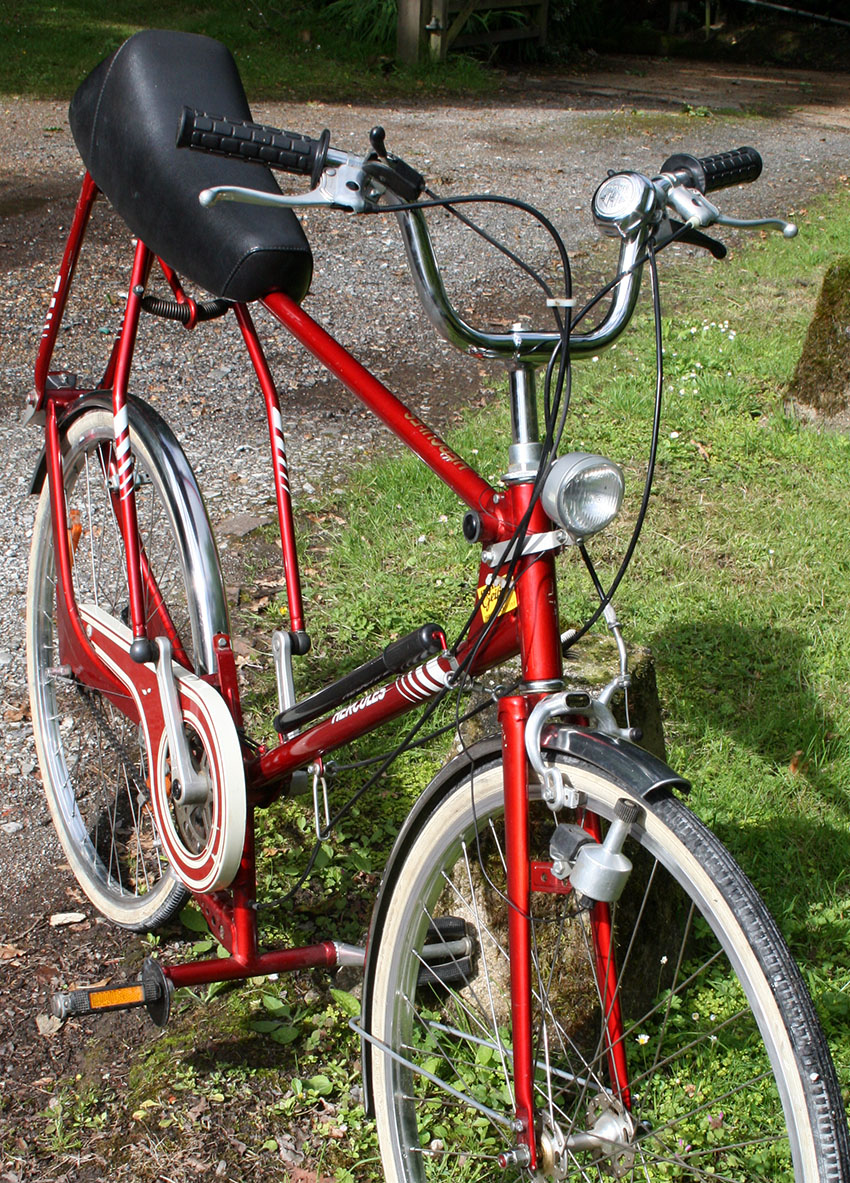 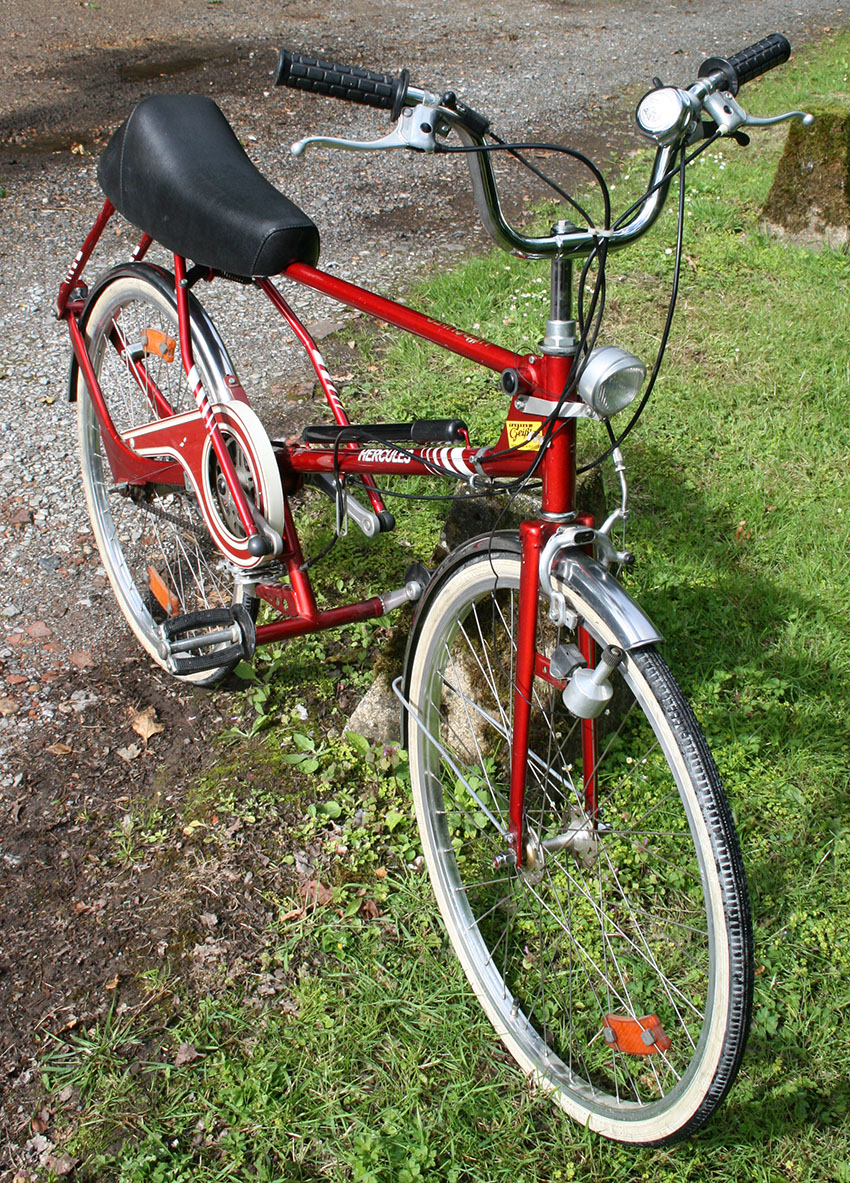 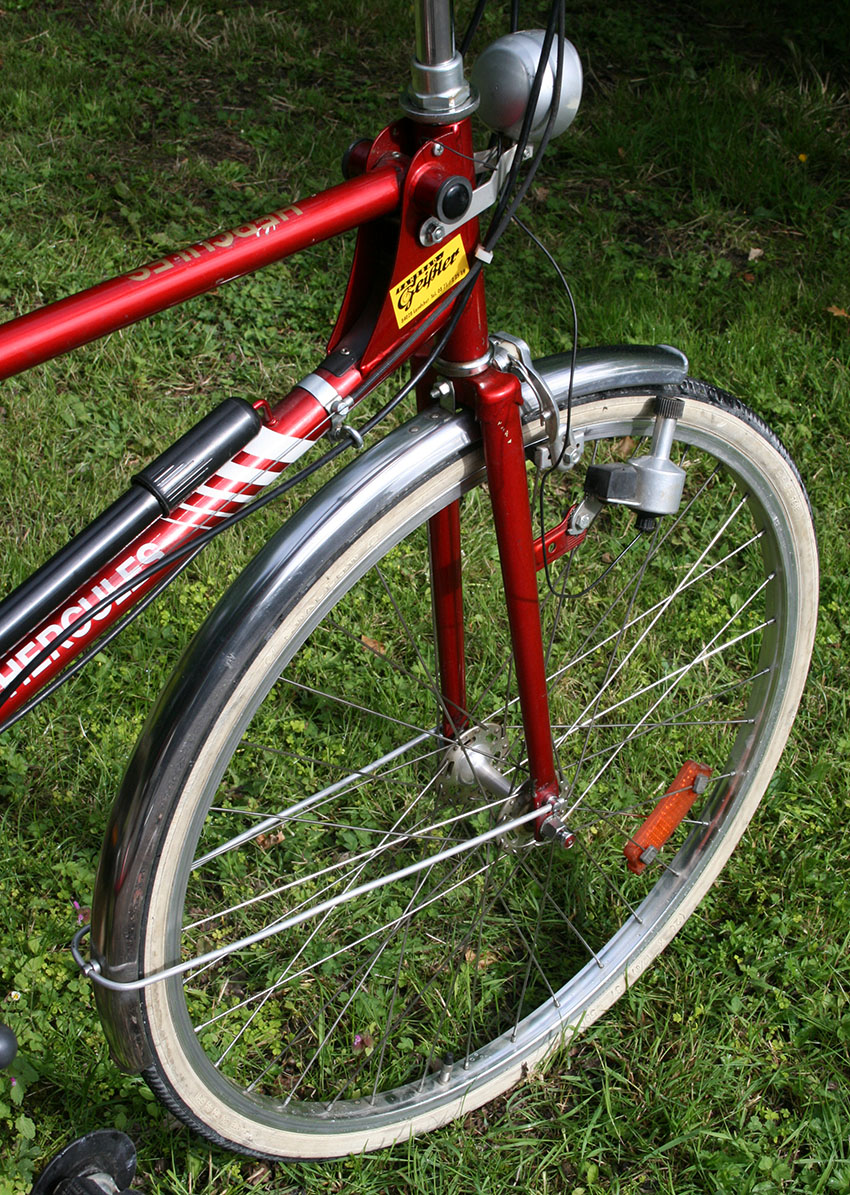 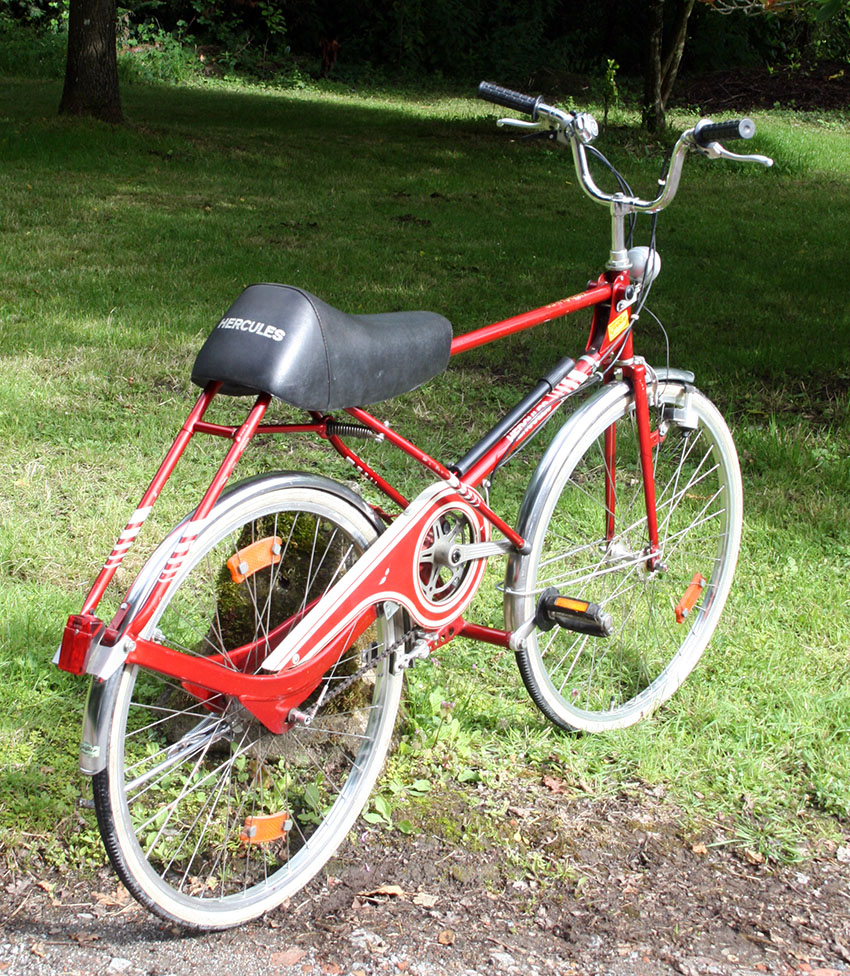 The Hercules Cavallo introduced a new concept in two-wheel cycling, although it was not a new idea – this type of rocking motion to power a machine was one of the earliest forms of motivation for tricycles and quadricycles during the mid-1800s.
The Cavallo is not pedalled. Instead, the machine pivots on four joints, and the frame tubes connect to the crank arms of the drive gear. Both feet are placed on the pedals: the added triangulation of the hands on the handlebar and the rider on the seat pushes the bike forward as the seat rocks up and down.
The rider’s movement is similar to that of riding a horse, hence the name of the machine – Cavallo, which is Iatalian for ‘horse.’
The bicycle was originally developed by the German industrial and aerospace engineer Hans Günter Bals. His initial prototype of this machine was made in 1956 as a child’s bicycle. An adult machine using the same principle appeared in 1975. Hercules acquired the license and put in on the market using the name Cavallo. However, due to disagreements with the inventor, there was only limited production, and the license agreement with Hercules was dissolved. Hans Günter Bals took over its development and production bringing out a subsequent smaller model under the name Balsbike. 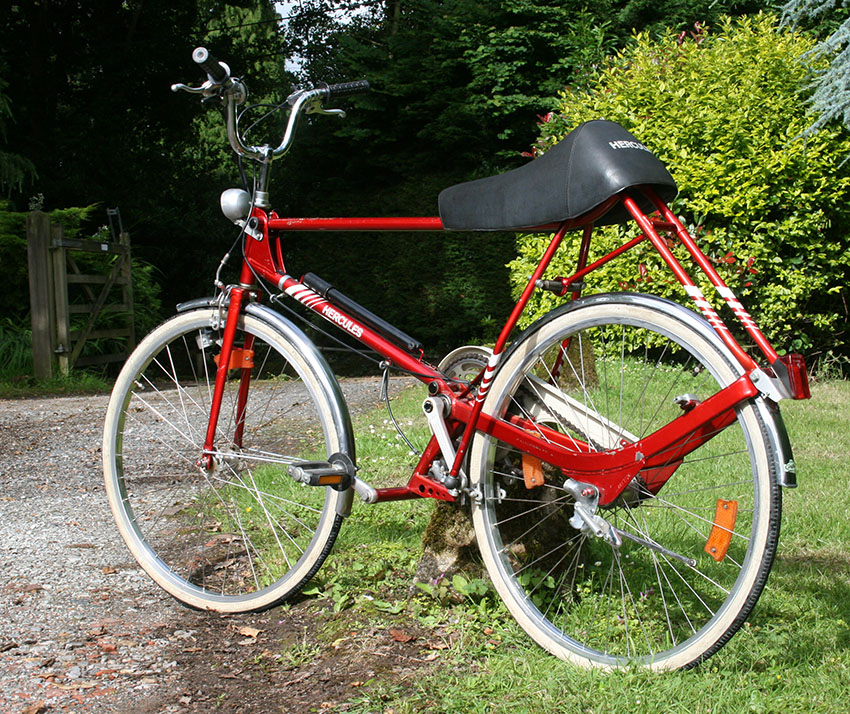