The Coventry Sewing Machine Co. was set up in King Street, Cheylesmore, Coventry, c1859 by James Starley and Josiah Turner to import and market sewing machines from America. Later they manufactured their own sewing machines and changed the name to The Coventry Machinists Co. In 1869 they started to manufacture velocipedes, bicycles, tricycles and quadricycles and became the second largest cycle maker in Great Britain under the name of the Swift Cycle Co. They produced a vast range of these machines, one model being named the “Swift” and another the “Club” as many cycle clubs were being set up at that time.

In 1898 they produced their first motor cycle and a motor tricycle. The first prototype car was made in 1900 which went into production in1901. It had a tubular chassis, a single cylinder de Dion engine and a two-speed back axle. The Swift Motor Co. was formed in 1902 and produced one, two, three and four-cylinder cars, first using proprietary engines up to about 1907 and then those designed by their Works Engineer, William Radford, which were made in their own factory. During the early 1900′s Swift entered their cars in reliability trials and won many gold medals. Up to 1915 several models were produced each year.

During the First World War the factory produced munitions, Renault and Hispano-Suiza aircraft engines, military bicycles and other war equipment. In 1919 the Company joined the ill-fated Harper-Bean organisation and changed its name to Swift of Coventry Ltd. Production was then concentrated on the four-cylinder 10hp and 12hp models which were renowned for their reliability. Although Swifts had their faithful followers, by the late 1920′s their hand-built cars could not compete with the mass-production methods of Morris, Austin, and Ford, whose similar cars sold for only half the price of Swifts. In spite of producing a cheaper 8hp model, the Cadet, with a Coventry Climax engine and a centre-change three-speed gear box in late 1930, this was insufficient to save the Company and the factory closed its doors for the last time in April 1931.

With the company being founded by James Starley in 1859, Swift Cycle Co adverts often proclaimed: PIONEERS OF THE BRITISH CYCLE INDUSTRY. With such a distinguished place in cycling history, the Swift Cycle Co produced distinctive bicycles. The more expensive models sported duplex forks, generally considered the ‘preserve’ of top manufacturers such as Humber, Centaur and Ariel. After WW1, the company changed their name to Swift of Coventry and their bicycles featured a chainwheel spelling out the name ‘SWIFT’ as well as a unique ‘S’ lamp bracket.

I don’t have a catalogue illustration for the ‘Cheylesmore’, but my research shows it to be the same as the other Swift models of 1904 except that it does not have the ribbed section forks that were introduced in that year. I suspect that it was a 1903 model, and unsold stock was updated with the 1904 style of rod brakes with inverted levers.

Some years ago Ray Miller researched Swifts of this age thoroughly, as he had a Swift Imperial he wished to identify (now owned by me: see bottom of page). He mentions a ‘c1904 Cheylesmore’ model in his Encyclopaedia.

This machine has been in storage for the past few decades (owned by a long-time vintage bicycle collector), and I’m pleased to see it back on the road. It’s in very nice unrestored original condition with the ‘Cheylesmore’ transfer intact on the steering head. The inverted lever brakes with original handlebar grips are an interesting feature, as they appear to be unique to 1904. The following year roller lever brakes were adopted by Swift (and also by most of the cycle industry). The Cheylesmore Swift is ready to ride.

Although Swift Cycle Co adverts claim its formation, as the Coventry Machinists Co in 1859, written history of james Starley shows the date as 1861:

May 14th, 1861, Starley left Newton, Wilson & Co and, with Josiah Turner and Silas Covell Salisbury, an American, went to Coventry to embark in the sewing machine trade. Salisbury and Starley patented a sewing machine. They rented part of the premises of a Mr. John Newark, on the site later occupied by the Swift works but the business did not prosper.

Local interest in finding work for under-employed watchmakers and those from the ribbon trade led to the formation of the European Sewing machine Co to make sewing machines, which retained the services of Messrs. Turner and Starley. The works were initially in Little Park Street, later in King Street. Soon a larger factory was needed where the ‘European’, ‘Godiva,’ ‘Express’ and ‘Swiftsure’ sewing machines were made. The company became the Coventry Sewing Machine Co, then the Coventry Machinists Co and later Swift Cycle Co.

Like many cycle manufacturers based in the Midlands, Swift Cycle Co Ltd had a showroom in London. Theirs was in Long Acre, Covent Garden, a centre for businesses connected with the cycle industry and motor trade.

Long Acre’s most famous cycle manufacturer is Denis Johnson, who had a workshop at 69-75, Acre House. His Hobby Horse – he called it a pedestrian curricle – was an improved version of the German Draisene, invented by Karl Drais. This forerunner of the bicycle was also known as a Swift Walker. He made at least 320 machines in early 1819 and, in May of that year, introduced a dropped-frame version for ladies to accommodate their long skirts. He also opened riding schools in the Strand and Soho.

For about six months the machine had a high profile in London and elsewhere, its principal riders being the Regency dandies. About eighty prints were produced in London, depicting the ‘hobby-horse’ and its users, not always in a flattering light. Johnson’s son undertook a tour of England in the spring of 1819 to exhibit and publicise the item. Nevertheless, by the summer of the same year the craze was dying out, and a health warning against the continued use of the velocipede was issued by the London Surgeons.

In Johnson’s machine, like that of von Drais, propulsion was simply by ‘swift walking’, with the rider striking his (or her) feet on the ground alternately. However, it led directly (albeit after a long delay) to the invention of the bicycle in the 1860s, when rotary cranks and pedals were attached to the front-wheel hub of a machine based on Johnson’s.

The coachbuilding trade dominated Long Acre in the nineteenth century – in 1906 41 buildings in the street were occupied by firms associated with transport, a mixture of traditional coachbuilders and those connected with the motor trade. By 1916 the transition to motor cars and related trades was almost complete. The Mercedes showroom was at number 127 to 130, close to Daimler and Fiat. At number 132 in 1929, John Logie Baird made the first British television broadcast. 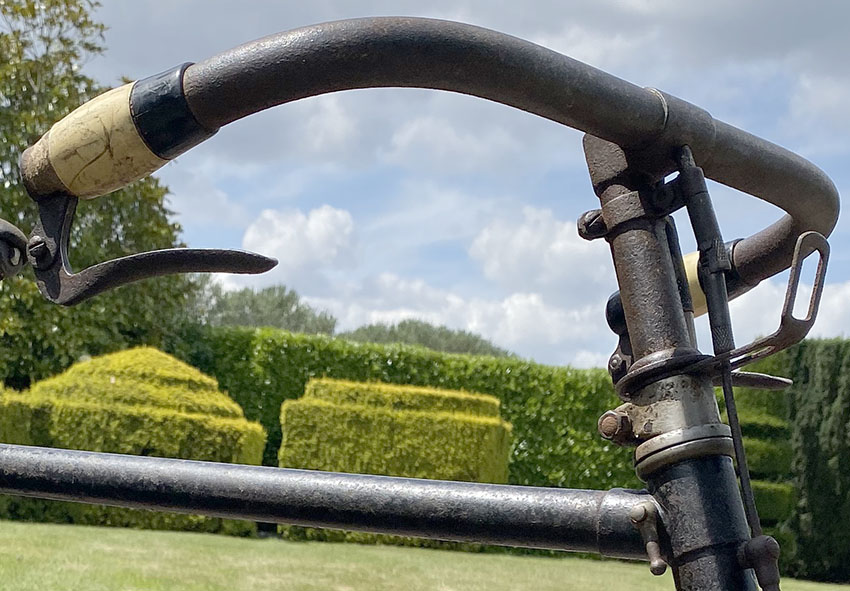